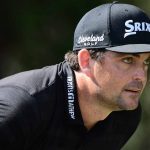 Keegan Bradley stares down his tee shot on the 13th hole on Sunday.

Keegan Bradley and Sam Burns were tied for the Valspar Championship lead with six holes to play, but the whole tournament changed after one costly swing on the 13th hole.

About an hour before Burns officially claimed a three-shot victory at Innisbrook — which was only three shots because he bogeyed the 18th — Bradley’s tee shot on 13 left him slumped at the waist in disbelief. The par-3 played at 182 yards on Sunday, and Bradley hit an 8-iron to a green with little depth that’s fronted by water. Splash.

“I just hit a terrible shot,” he said. “I hadn’t really hit a really bad shot all week and you just can’t hit it there, obviously, but you can’t hit it right of the flag. And I just came out of it a little bit, it got gobbled up by the wind, if it goes another yard it might have been in that bunker, but it was a bummer.”

Bradley parred the hole in each of the first two rounds and made bogey on Saturday. The 13th, with a scoring average of 3.246, played as the second-toughest hole of the week. Its last hurrah proved to be a critical moment, too. Burns made par after two-putting from 61 feet and his two-shot edge became three when he birdied the 14th.

“You never wish that upon anyone, you never wish to see someone hit it in the water,” Burns said. “And I was hoping Keegan would play his best. I wanted to see how I would hold up and see if I could beat him with my best against his best. Unfortunately for him he hit it in the water there and I really felt for him. I’ve been there, I’ve done that. So I think for me I was just trying to focus on two-putting that ball. I knew that was going to be a challenging hole, I knew where that pin was there’s just no way to really get that ball close. So we were just trying to make a 3 there and I was able to do that.”

Added Bradley, who shot 71 and finished solo 2nd: “I was in contention today obviously coming down the last nine holes. I’ve done pretty well in my career when I’ve had a chance and I just didn’t hit the shots that I needed to.”