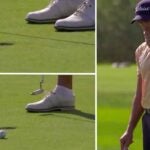 It's safe to say that Justin Warren has had better Mondays.

It was, generously, a one-footer. The sort of putt no golfer second-guesses, neither pro nor amateur.

The putt — struck by Justin Warren at Tahoe Mountain Club in Truckee, Calif., on Monday evening — would have been a “gimme” to even the stingiest of opponents. Pick it up. It’s good.

And yet when Warren rolled his ball, it didn’t cooperate.

There are times in a golfer’s life when pulling a one-footer could be seen as funny. But Warren’s miss was entirely unfunny.

The 24-year-old Australian’s miss came in a sudden-death playoff in the Barracuda Championship’s Monday qualifier. The gaffe cost him the playoff, and as it turned out, a chance at his first-ever PGA Tour start.

In the immediate aftermath of Warren’s miss, he reacted as you might expect: with shock. As his ball came to rest six inches beyond its intended target, Warren’s hand clasped the bottom of his jaw, as if to keep it still attached to his body.

He looked stunned for at least another 10 seconds.

Some context on our unfortunate protagonist: Warren is the 665th-ranked golfer in the world. He has played in seven events in 2021 — all on the PGA Tour of Australasia. Earlier this year, in the Moonah Links PGA Classic, Warren recorded a solo runner-up finish, the best result of his young career.

On Monday, he shot a seven-under 65, which landed him into a playoff for this week’s Monday qualifying spot at the Barracuda with Mark Baldwin. Then, heartbreak.

Chalk it up as yet another reminder that nothing in golf is a sure thing. Not even gimmes.