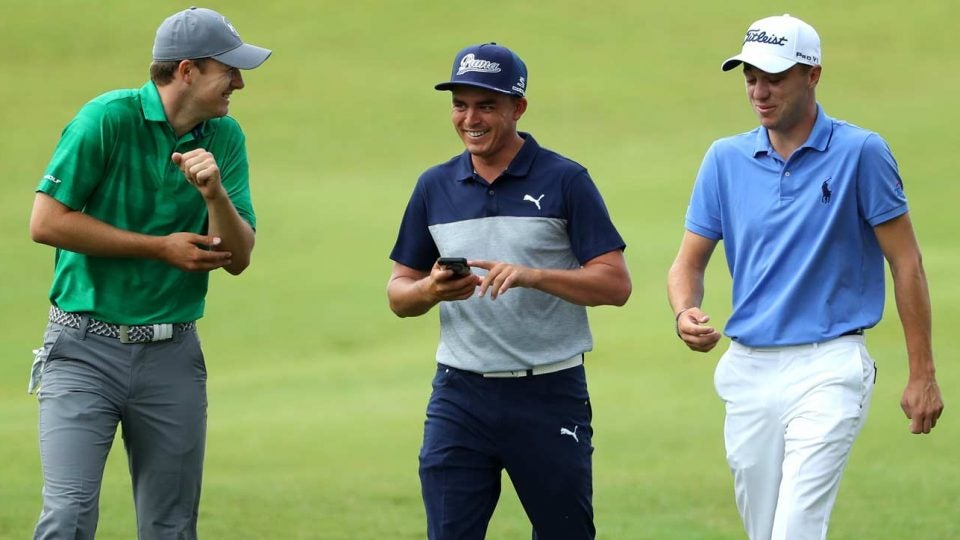 Jordan Spieth, Rickie Fowler and Justin Thomas played together during a practice round at the 2016 Players Championship.
Getty Images

PONTE VEDRA BEACH, Fla. — “It seems like just a blink ago you were considered one of the young guns out here,” the question began.

Justin Thomas seized on the moment. “Am I officially out? Am I thrown out of the young guns?” The reporter nodded assent.

Thomas is, of course, hardly washed up. He’s still more than a month shy of his 27th birthday. But the group he’s in this week — Thomas, Jordan Spieth (26 years old) and Rickie Fowler (31) — joins three good friends who have been in golf’s spotlight for what seems like forever.

News
Players Championship picks to win: Why you should keep an eye on Jon Rahm

Pros typically dismiss the differences of playing with familiar partners, but Thomas was insightful about the advantages and drawbacks to playing with two of his good buddies.

“Yeah, it can be tough, but I’ve had some really good rounds with some great friends,” he said. “You definitely have to find the, I guess, the happy medium of we’re going to talk between shots, and it’s just a matter of, okay, when do I cut that off and I need to get back into my focus?” But lapses occasionally do happen, he said, during some mid-round chatter.

“A lot of times I hit it up there close and I’m kind of counting my putt, it’s like a four-footer and I’m kind of laughing and joking around with the guys on the green and next thing you know it’s my turn to putt, I’m not focused and I miss it. I’m walking off the green going, ‘How many times do I have to do to this learn that I’ve got to stop doing it?’

“But because of that I obviously have learned, and I know that I have to take it into consideration. We’re going to have fun,” he said. “We’re all going to be trying to play as well as we can and beat each other, but in between shots just kind of yuk it up and have some fun.”

Spieth and Thomas have famously known each other since they were 14 years old, while Fowler and Thomas have grown close living in Jupiter, Fla., where the two are essentially neighbors. The three have been regular presences on U.S. teams in recent years and frequently play together in the offseason — most notably as three of the four members of the “SB2K17” crew that took on the Bahamas in 2017 (Smylie Kaufman is not in the field this week). They’ve reunited for events like Spieth’s bachelor party, Fowler’s wedding and a pre-Hero World Challenge meet-up.

“We’ve had a lot of rounds of golf together, probably more fun rounds than competitive rounds,” Thomas said. “But it’s not like I’m going to play great today because I played with Jordan and Rick. I would like to hope that I have a little bit more confidence in myself, that I’m a good enough player to play without them.”

News
Players Championship sleepers to watch: Is it Viktor Hovland’s time to shine?

But this isn’t a reunion of long-lost friends. These guys see plenty of each other.

“It’s not like I can really catch up with them. I pretty much know everything about them already, and vice versa, but it’s just — I like their caddies, I like their families. It’s easy for us. It’s something we’re very, very accustomed to.”

As for the “Young Gun” moniker? That torch been passed to another featured group of Viktor Hovland (22), Collin Morikawa (23) and Matthew Wolff (20) — all Tour winners and all Players Championship rookies. Thomas said it’s unfair to compare groups across time (though that won’t stop us). But he acknowledged the new crop has plenty of game, too.

“The fact that those three guys have won already is unbelievable. I don’t think — they probably don’t even realize how impressive it is. But they also understand how talented they are, and we do, too, and they’re going to be out here for a long time.”

Old man Thomas will be, too.

Pro wanted to be ‘sexiest golfer.’ PGA Tour granted him his wish.

‘You wonder: Am I ever going to be back?’ Rickie Fowler opens up on struggles
Go to mobile version