‘Keep the hammer down:’ Dialed-in Justin Thomas shoots 64, surges into contention at Players 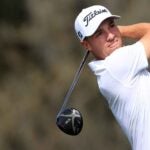 Thomas stood on the first of Sawgrass’ three famed closing holes at six under for the day and eight under for the tournament. He trailed the 36-hole leader, Lee Westwood, by a single stroke. He’d drained seven birdies on the afternoon, and standing in the 16th fairway, eyed his last, best chance at number eight.

“The second shot on 16 is really dependent on where the drive is,” he told the PGA Tour. “It really epitomizes the golf course. You have to take what it’s giving you in that specific time, realize where the pin is, where you need to miss it, where you can and can’t go. I made it sound pretty difficult, but it really is a shot that’s so important because it is a birdie hole and you need to take advantage of it.”

After a lengthy conversation with his caddie, Jimmy Johnson, Thomas settled upon his approach — a high, arcing long iron starting in line with the television camera behind the 16th green and finishing (the pair hoped) on the apron of the putting surface.

Thomas pulled his arms back and plunged his club into the turf. The ball rocketed off the face and began a towering, gentle hook. He held his pose, stalking his ball as it fell back to earth. The ball landed, as if on cue, a yard or so shy of the green. Thomas twirled his club down to his waist and flashed a smile as his ball come to rest seven inches from the flagstick.

A few minutes later, he tapped-in for eagle. A few minutes after that, he was the leader in the clubhouse on moving day at the Players Championship.

“I wish all rounds were that easy,” Thomas said afterward. “I hit the ball beautifully, I drove it well, I hit a couple squirrelly shots there at the end of the front nine, but the good part is that I knew why they were happening. I knew what the swing flaw was, what the physical mistake was, so I felt like I kind of bounced back from that pretty well and hit some really good shots on the back nine.”

It was that kind of day for Thomas (10 under), who momentarily found himself alone atop the leaderboard on Saturday afternoon. He began the day seven strokes back of Westwood’s lead, but quickly cut the deficit in half after birdies on each of the first four holes.

His first bout of trouble came on the 5th hole, when he yanked his approach on the 460-yard par-4 deep into the trees. The result was a scrambling, two-putt bogey that could have been much worse.

“I just was staring it right down the smokestack with an 8-iron and just double-crossed it, hit it in the worst place you could hit it,” Thomas said. “So obviously I would have liked to make birdie or par there, but that could have been the best thing to happen to me to kind of wake me up and snap out of it, because I wanted to keep making birdies.”

Thomas played the remaining 13 holes at five under (including tap-ins for birdie and eagle), and even that might have been below his standards.

“[The goal was] to keep the hammer down,” he said. “I didn’t want to kind of hold back and play away from making bogeys, I wanted to keep trying to make birdies.”

In fact, Thomas made no bogeys on his final 13 holes Saturday, a performance that reached a deafening crescendo not on Sawgrass’ island green 17th, but on its eminently gettable predecessor.

As he walked off the 16th, Thomas was silent. He tipped his cap toward a gaggle of spectators, handed Johnson his putter, and walked down the galley.

Still, his message couldn’t have been more clear: Stay out of the way.

“It’s fun. Golf is so fun when you’re playing well and when things are going well it’s really easy, but this game isn’t like that, unfortunately,” he said. “When you’re able to get in those zones and hit those shots exactly how you see it, it’s fun. It really is.”