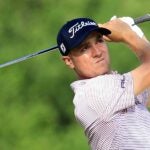 Justin Thomas hits a shot on the 2nd hole at Olympia Field Country Club on Saturday.

The PGA Tour lists dozens of records. Lowest 18-hole score (Jim Furyk with a 58 in 2016). Last to win with sister as caddie (John Huston with Julie Jones in the 1998 United Airlines Hawaiian Open).  Last time it snowed during a tournament (the 2013 World Golf Championships-Accenture Match Play Championship). The Guinness Book of World Records lists dozens more. Longest golf hole (the 964-yard, par-7 7th hole at the Satsuki Golf Club in Sano, Japan). Longest throw of a golf ball (394 feet, 5 inches by Stefan Uhr of Sweden on Aug. 20, 1992). Lowest round (55, set by Rhein Gibson in 2012 and tied just on Thursday by Alexander Hughes).

Justin Thomas was convinced he had set another.

Thomas teed off Saturday on the 158-yard, par-3 13th hole at Olympia Fields Country Club just outside of Chicago. He was even-par for his third round at the BMW Championship and 7-over for the tournament. About three seconds after he swung, with the ball yet to land, Thomas believed he had it.

“That’s got to be one of the worst golf shots ever hit in the history of the sport,” Thomas murmured.

One of the commercials being played during the PGA Tour’s FedEx Cup playoffs declares, “History will be made here.” Thomas had made his pitch.

His ball landed on the green. 57 feet, 4 inches from the hole.

When you blow up a shot a little, you blow things a little out of proportion. The shot may or may not have been one of the worst ever. But Thomas’ assessment was one of the best.

“Justin not happy there with that tee shot,” one of the announcers on the broadcast said.

“He said it was one of the worst shots in the history of golf. Not quite,” another announcer said.

Thomas came up 3 feet short on his birdie putt. (“This would be apropos if it went in, wouldn’t it, after what he said on the tee?” the first announcer said.) He slid the par putt 2 feet past the hole to the right. He three-putted for bogey.