Justin Thomas is riding high. He’s fresh off his second win of the 2020 PGA Tour season, already surpassing his win total for the entirety of 2019 season and pushing his career victory total to 12 at just 26 years of age.

There are a lot of factors that go into winning at a such a rapid rate, including unnatural talent and an instinct for competition. But Thomas has another secret he considers vital to maintain his winning ways, a strategy far more relatable than pounding 350-yard drives on the regular: rewarding himself.

On Wednesday at the 2020 Sony Open in Honolulu, Thomas revealed that after every victory on Tour he uses a portion of the winner’s check to make a huge, budget-busting purchase.

“Yeah, I’ve always been someone to celebrate a win,” Thomas told reporters on Wednesday. “Whether it’s enjoying it with people or doing something or buying myself something that I wouldn’t buy myself.”

Far from being (just) an empty act of shameless consumption, Thomas’ spending sprees are a something of a mental strategy to incentivize winning.

“I’ve always said, okay, my next win I’m going to buy this,” Thomas explained, “It’s like I’m not going to do it until I do that. I just feel like it’s very, very important to reward yourself when do you something well or you accomplish something because you did something good. You deserve it.”

When asked to list a few of things he’s bought himself during his career, JT had a little trouble naming them, which is somewhat understandable given how much he has won in such a short time. He did recall one particularly ambitious self-gift, saying, “I built a man cave in my house one time,” before confirming “it does have a urinal,” drawing laughter from the room. 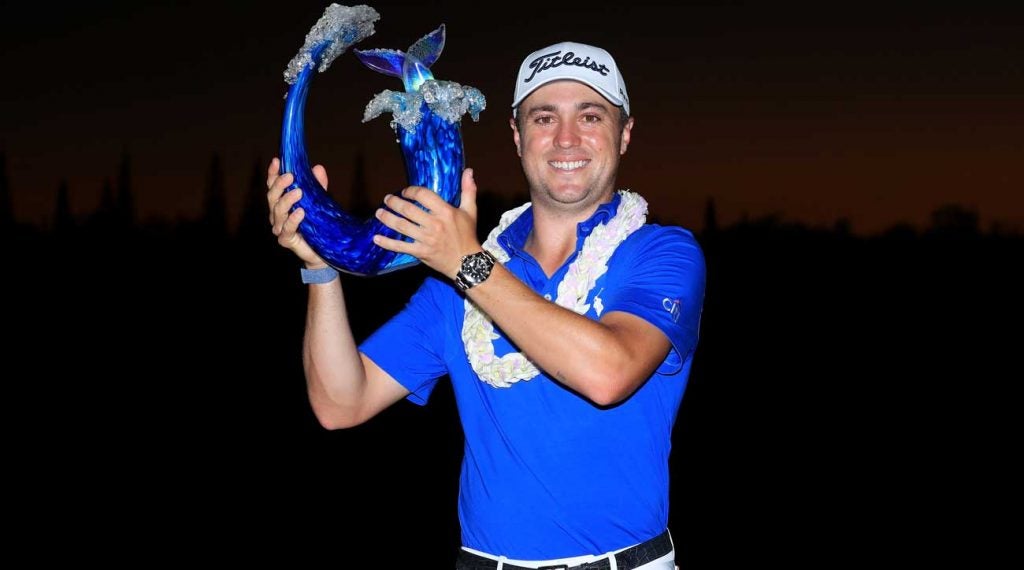 Justin Thomas poses for photos after winning the 2020 Tournament of Champions.
Getty Images

Thomas’ tradition began early on in his career, but before the wins started coming in bunches, he had a lower bar of success.

“Every time I finish in the top 10, I go to the mall,” Thomas shared with GOLF.com in 2016. “We have a really sick mall here in Palm Beach, Fla., with a lot of high-end stores. I’ll go in there and impulse buy for a couple of hours.”

Once he did finally capture his first win at the 2015 CIMB Classic, Thomas planned to gift himself something slightly less extravagant than a man cave, with the help of fellow pro Rickie Fowler.

“Rickie and I are going to go later today. There are these sweet suede slipper-loafers I’m gonna get,” Thomas said after the win. “I saw them before I left but I just couldn’t pull the trigger — but as soon as I won, I knew I’d be getting them.”

But he’s not always so selfish with his victory purchases. He occasionally buys a special gift for someone else in his life, including a car for his dad after one win and a watch for his girlfriend. As for his most recent win at the Tournament of Champions, Thomas seems to be running out of ideas for self-gifts, or at least his enthusiasm for the tradition is beginning to wane after win No. 12.

When asked if he’d bought himself anything yet with the $1.34 million he earned at the TOC, Thomas replied in the negative, “I haven’t yet. I think I’m going to get a car.”