Justin Thomas and the three-wood that set up U.S. Open history 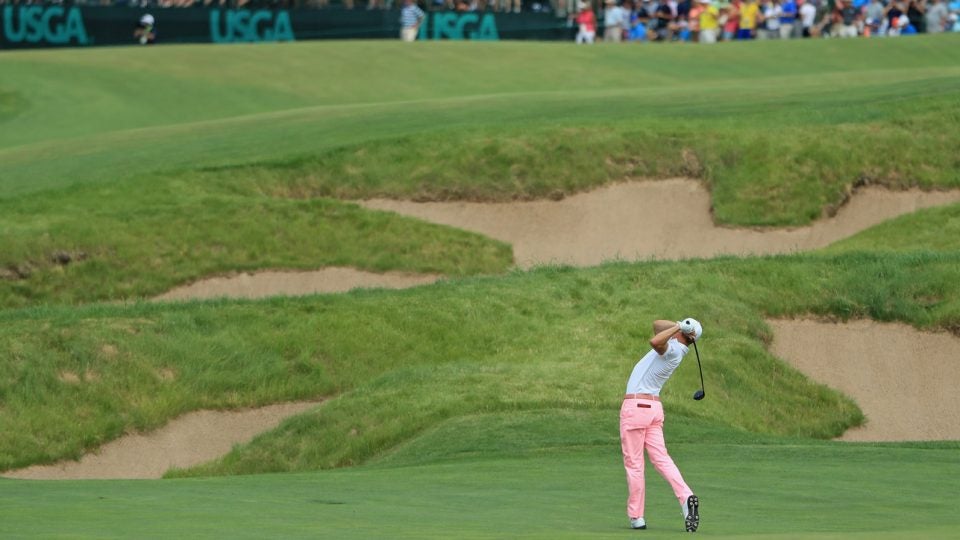 ERIN, Wis. — The spectators had no idea what was about to play out in front of them.

Those behind the 18th green at Erin Hills sat quietly as two men in pink made their way up the 18th fairway, more than 300 yards away. They were mere specks in the distance. One, Jonathan Randolph, was wearing a pink shirt. The other was in pink pants. It was at that time—approximately 4:17 p.m. local—that Justin Thomas, the man in the pink pants, began to make U.S. Open history.

After hitting three-wood off the tee on the long par-5 18th, Thomas was on the right side of the fairway. He had been in the same position Friday, only six yards closer to the green. The three-wood he crushed in that instance ran past the green, so on Saturday he thought an iron might do.

“I probably would have hit 2-iron because I could have roasted a little hook-in two-iron and got it with the slope,” Thomas said. “But I felt like if I overcooked it and got in that left bunker, like a 40- or 50-yard bunker shot, that would have been tough. If I blasted it through, it wouldn’t have been good.”

The course received nearly an inch of rain Friday night and into Saturday morning, so Thomas knew the 18th green was softer Saturday—and much more receptive to a three-wood. Friday’s three-wood? That came out flat. But Saturday’s? From more than 300 yards away, Thomas launched it into the sky.

The fans in the fairway could see the promise in the sailing shot, but up at the elevated green, all was quiet. The crowd could barely see Thomas, much less his ball against the dark gray horizon.

The seven seconds between contact and touch down felt like an eternity. At last the ball touched down on the front edge of the green. Still quiet.

“Oh, ooooh,” gasped a few onlookers, as Thomas’s ball bounced once, twice. Then the reactions grew louder. “Ooooohhhhhhh!“ as the ball rolled out to eight feet. Still, there was some confusion regarding who struck the magnificent approach. “Was that Justin Thomas … in the pink pants?” one spectator said to no one in particular. It was a similar reaction to what Thomas received on the par-4 15th, driving the narrow green from 288 yards away, the back stop bringing his ball back to six feet.

“That three-wood is just raw power, which is what he has,” said Thomas’s father, Mike, after the round.

.@JustinThomas34 has this putt to break Johnny Miller’s #USOpen record for lowest score in relation to par. https://t.co/i0CFGdlWnE

Thomas was now putting with a chance at 63, which would tie him with Johnny Miller as the only player in tournament history to reach the magical number. Miller won the 1973 U.S. Open with a final-round 63 at Oakmont. Many consider it one of the greatest rounds ever played. If Thomas made this putt, he would outdo Miller by one stroke in relation to par, but great approaches are quickly forgotten by missed putts. Thomas had to make it—but he was starving. That’s why he said he missed the short eagle try on 15.

Thomas had been hungry since the 14th hole. The difficult walk that Erin Hills presents, which Thomas pointed out earlier this week, was wearing on his body. When he lacks nourishment on the course, Thomas says, he gets “a little shaky and jittery on putts.” This was his putt for history and, to make matters worse, Randolph was making a mess on the 18th.

Randolph, who has known Thomas since he was a junior, came up short with his approach. He didn’t want to hold up the proceedings, but his fourth shot skirted by the hole, off the green and into the swale well below the hole. After hitting one of the greatest shots of his life, and preparing for one of the biggest putts of his career, Thomas sat down on his golf bag and waited.

“This is such a big tournament for me at this point in the summer,” Randolph said. “I wanted to get out of his way a little bit, but at the same time, I really need to play good, so I felt bad stalling him out a couple times.”

Ten minutes had passed since Thomas hit his three-wood from the heavens. He got up and stretched his arms away from his body, then he stretched his fingers away from his palms, as you might after typing out a long email. His putt was eight feet, one inch and mainly flat. There was a twinge of left-to-right movement in it—maybe half the width of a ball—but even before his Titleist dropped into the hole, Thomas lifted his putter in celebration. Sixty-three. Randolph met him with a fist bump. Thomas could breathe a sigh of relief. History was his and, momentarily, so was a solo lead in the U.S. Open. His nine-under finish pushed him to 11 under for the championship.

And there it is! @JustinThomas34‘s 9-under 63 sets the #USOpen record for the lowest score in relation to par. https://t.co/aicd4H69eg

After a quick celebration on the green, Thomas signed his scorecard and was asked by the swarming media which shot he’ll remember most.

“The three-wood on 18,” Thomas said, flashing a smile. “That was pretty sweet.”