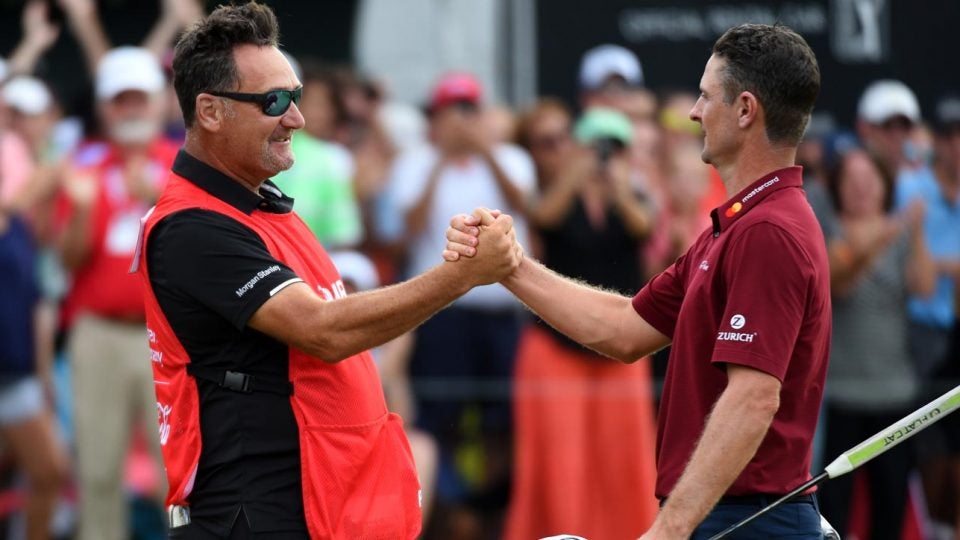 One of the longest-standing player/caddie duos is separating, perhaps for good. Justin Rose’s longtime caddie Mark Fulcher will take an indefinite leave from carrying Rose’s bag to fully recover from heart surgery he underwent earlier this year.

Rose broke the unfortunate news with a long message on Twitter, saying, “After an amazing 11 years with Fooch, our successful run together has finished for now.” Rose noted that Fulcher was “forced” into this decision in order to “focus on his health and well being after the heart procedure earlier this year.”

Fulcher previously took a leave of absence from caddie duties in January when he had surgery to replace a heart valve. While Fulcher (who is affectionately known as “Fooch”) was recovering, Rose won the Farmers Insurance Open at Torrey Pines with fill-in caddie Gareth Lord on his bag. He dedicated to win the his former caddie, saying, “Fooch, that was for you, mate… Love you and we’ll see you soon.”

Tournaments
‘That was for you, mate’: Justin Rose dedicates win to recovering caddie

Fulcher returned to Rose’s side at the 2019 Masters at Augusta National, where Rose shot 75-73 to miss the cut. But now Fooch has been “medically advised that a further period of recuperation is required,” according to Rose.

Rose has captured eight PGA Tour wins with Fulcher on his bag, none bigger than his 2013 U.S. Open victory at Merion Golf Club in Pennsylvania, Rose’s only major win. Rose also won an Olympic Gold Medal with Fulcher carrying his clubs at the 2016 Summer Games in Rio de Janeiro. Last fall, the pair captured the 2018 FedEx Cup title, along with its $10 million bonus.