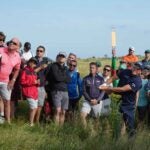 Phil Mickelson hits out of the rough on Thursday on the 12th hole at Royal St. George's.

Phil Mickelson, on the par-4 1st at Royal St. George’s, hit his drive down the left side of the fairway, looped in a short iron to about 12 feet and just missed the birdie putt to the right of the hole. He’d settle for a par during Thursday’s first round of the Open Championship. On his way to his tap-in, this year’s PGA Championship winner and a six-time major champion overall, would smirk at his miss.

It would worsen from there — the expressions and the round.

On the par-4th, after a par on the 2nd and a bogey on the 3rd, Mickelson made a 5-footer for bogey, then tug at the back of his blue cap in frustration. On the par-4 5th, he rimmed out a 12-footer for par, then jolted back out of his putting crouch.

On the par-3 6th, Mickelson missed another 12-footer, this time for birdie, and this time he held his putter from both ends and lightly tried to bend it. On the par-5 7th, he rimmed out a 10-foot par putt, leaned back and opened his mouth wide. The crowd around the green also gasped.

By the time Mickelson reached 18, he had made nine pars and eight bogeys. And zero birdies. He’d double the par-4 closing hole after a drive into the thick stuff left, a blast out, a third shot that came out 10 yards short of the green, a chip and two putts, the 34th and 35th of his round.

Add it all together and it was a 10-over 80, which tied Mickelson for last in the 156-player field. It was his highest-ever first round at the Open Championship across 26 appearances. It was his second-highest round ever at the Open, behind his 85 in 1998 at Royal Birkdale.

A decade ago, at the last Open played at Royal St. George’s, he finished tied for second, and two years later, he won his first and only Open. On Thursday, he was 16 shots behind leader Louis Oosthuizen.

Mickelson’s final expression was more subdued. On 18, after his tap-in for a 6, he handed his putter back to his caddie and brother, Tim, waved gently to the crowd and tipped his cap, and fist-bumped his group’s players and caddies. Mickelson will be back Friday, but almost assuredly won’t be Saturday and Sunday.

“I’m sure he’s pretty shocked by that,” analyst Paul Azinger said on the Golf Channel broadcast. “He was here in plenty of time. Played a lot of practice rounds. Just never saw that coming.”