A septendecuple-bogey 21? This scorecard is insane 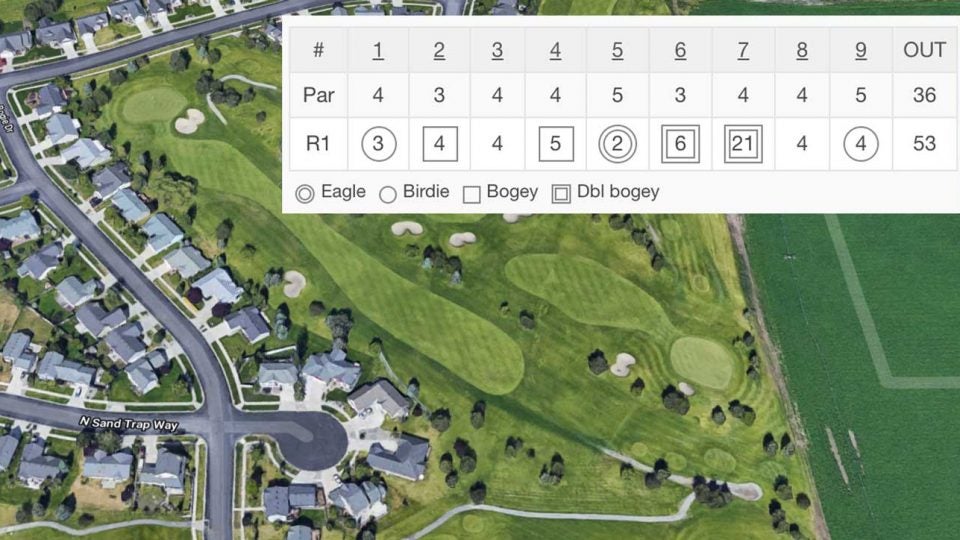 The 7th at Prairie Falls ruined the makings of a solid round.
Google Maps

One of the painful truths of competitive stroke-play golf is that every putt must be holed and every shot counted. Once in a while, those important rules rear their ugly head and someone makes an eye-popping score. That’s exactly what happened in Idaho earlier this week.

Playing in a Washington Junior Golf Association District 5 Sub-District tournament, high school senior Will Reeves began his day with a birdie on the 1st hole at Prairie Falls Golf Club. Great start, right? It got better. After a couple of bogeys in the next three holes, Reeves made a deuce on the par-3 5th for a birdie. It brought him back down to even par for the 18-hole event.

Two holes later … disaster. On the par-4 7th, Reeves carded a 21. Twenty-one. A wild jump from three over through 6 to 20 over through 7. It’s unclear how this happened, but we’re suspecting some type of penalty area was to blame. Or perhaps just out-of-bounds markers. One reader who knows the course noted that the 7th has O.B. left.

Reeves, 17 and from Spokane, Wash., bounced back with a par and a birdie to round out his front-nine 53 and signed for a 92 on his round after shooting a gutsy 39 on the back. A quick look at his results in other sub-district tourneys shows that Reeves is capable of far better. This was a fluke in the worst way.

The most tragic part of it all? With a simple par on No. 7, he would have made the cut by four.

An earlier version of this story stated that the 5th hole at Prairie Falls is a par-5. It used to be but the course has been redesigned in recent years. Therefore, Reeves did not make an albatross on the 5th hole, but a birdie.