When Jordan Thomas lost his legs, his passion for golf (and making an impact) only got stronger 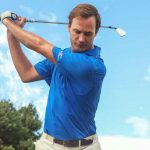 Jordan Thomas has found his passion, and his purpose, through the game he loves.

Jordan Thomas has always been a little stubborn. It’s coded into his DNA, next to the gene sequences for his 6-4 frame and preternaturally wonky golf swing.

What kind of teenager, after a devastating accident, volunteers to swing a golf club for the first time in months in order to hit the ceremonial tee shot at a ribbon-cutting event for his remodeled course? The answer: the same kind of teenager who’d pound a drive 270 yards down the first fairway a few minutes later; a precocious boy named Jordan Thomas.

Need another example of his stubbornness? How about not letting a life-altering day dictate who he is and what he accomplishes. A freak boating accident on a diving trip in 2005 robbed Thomas, who was 16 at the time, of both limbs below the knee and nearly took his life. As a result, Thomas’ life revolves around prosthetics. He walks in them, runs in them, swims in them, lives in them. He also plays golf in them. To that end, Thomas is a stud — a +2.1 index (yes, plus 2.1) — who revels in quickly disposing scratch and single-digit handicap opponents.

“My foundation started probably four days after my accident. I met a number of kids who just didn’t have access to prosthetics,” Thomas, now in his 30s, told GOLF.com. “It wasn’t this great, the skies parted and the angels descended. It was like, yeah, this is bulls—. Let’s do something. So we started a foundation. Problem, solution.”

I was lucky, man. I had friends, I had family. So now, it’s about trying to leverage my love and passion for golf to drive impact.

In the 5,800 or so days since the Jordan Thomas Foundation was founded, Thomas’ life has surrounded channeling persistence into purpose — dedicated to providing children with traumatic limb-loss free access to top-of-the-line prostheses.

The problem, as Thomas explains it, is simple. For the limb-loss community, prosthetics are a bit like shoes — different legs are used for different activities, and no two are the same size. But they’re expensive, sometimes running as high as $50,000 for a pair. Children whose families don’t have the means to afford new equipment are trapped: forced either to wear old, ill-fitting equipment as they continue to grow, or to live without prosthetics of any kind.

“It’s a fully tailored suit. It’s so specific to each kid given the rate that they’re growing,” he says. “It needs to be fit for them pretty much annually, maybe every 18 months. I’ve got a pair of legs that I walk in, and then I’ve got a pair of legs that I golf in. It’s hilarious because those dudes roll up to the golf course and they sit on their bumper and they put their golf shoes on, I just put my golf legs on.”

Through his work at the foundation, Thomas battles insurance companies, lobbies government officials and uses his voice to broadcast the inequities faced by the least-advantaged members of his community. It’s the sort of hard, slowly shifting work that requires an undaunted leader; someone unwilling or unable to be moved off his beliefs. In other words, it requires someone like Jordan Thomas.

In his day-to-day, you can find Thomas on the golf course, where he participates in outings and other fundraisers to help raise awareness for the foundation. As his charity’s founder, he serves as part-fundraiser, part-vocal advocate, and part-mama bear for the children it supports.

“I’m naturally a pretty good spokesman, right? When folks see me they’re like, ‘Who’s that? He’s awkwardly tall, but dude, he hits it hard,’” Thomas said. “I’m a walking advocate for our kids everywhere I go, but I’m also a fierce mother. I’m like their tiger mom.”

His persistence comes from his parents, both of whom are intensive care physicians in NICU units. From an early age, Thomas learned the value of service, particularly for the most vulnerable among us. In the days after his accident, that knowledge provided perspective.

“I was lucky, man,” he said. “I had friends, I had family. I had the knowledge that I would never have to go without. So for such a traumatic, awful event, I had it as easy as it can be. So now, it’s about trying to leverage my love and passion for golf to drive impact.”

Thomas’ charity is unique in that it does not focus on one-time aid. Rather, the foundation’s goal is to provide complete access to prosthetics throughout childhood for each of its beneficiaries. To date, the foundation has raised a hair under $3 million and has helped around 70 children — 58 of which are currently in the program.

Thomas hopes to expand the foundation internationally in the coming years, with plans to add more than 100 children from countries outside the U.S. by the end of 2021. To get there, he’ll need help from an old friend: the golf community.

Golf was first to rally behind Thomas, first to prop up his foundation, and first to provide a return to normalcy after his accident — his first swing in prosthetics was at age 17, on the first tee at that aforementioned ribbon-cutting ceremony.

“Golf is such a giving, philanthropic world, and it just so happens to be that there are a lot of affluent people that play the game,” he said. “My two biggest passions on this earth are golf and the foundation, so it just sort of naturally made sense to tie the two together.”

When it comes to his work, Thomas has already made up his mind. The foundation is his life, and it’s going to remain his life for as long as it takes. He’s stubborn that way.

“Man, it’s the thing that gets me out of bed in the morning, every single day of my life,” he said. “For me, it’s confirmation that I was kept on this planet to do this very thing.”