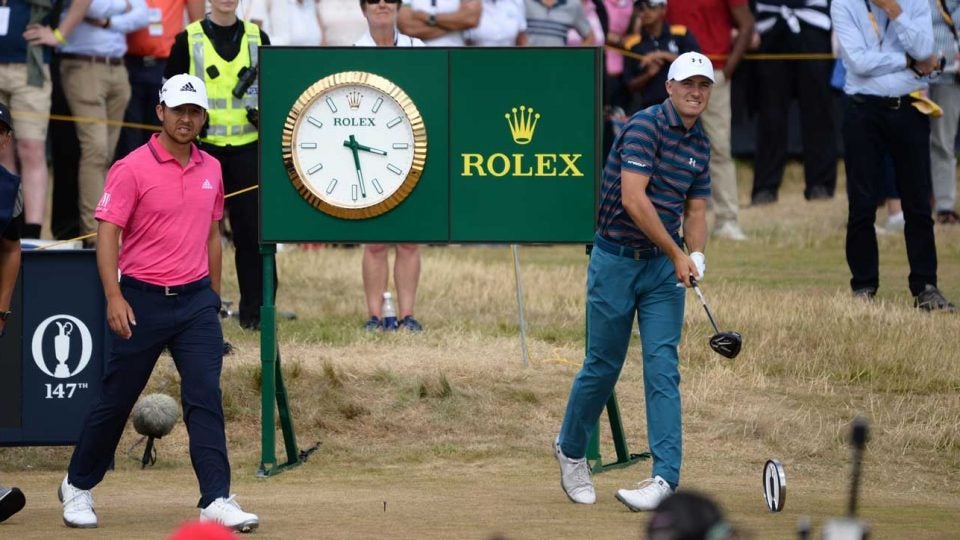 CARNOUSTIE, Scotland — At the moment, there’s a ‘V’ under Jordan Spieth’s right thumbnail. It’s abnormal and really quite gross. Surely, he’s tended to it with a bandage, but it won’t heal quickly. Let’s call it a Carnoustie tattoo, reminding him just how much he was beaten up Sunday.

That ‘V’ is the work of a gorse thorn, genus Ulex. It’s a plant you see all over Scotland, native to dry areas, growing on rocky land. Spieth met the gorse on the 6th hole, a par 5 that certainly plays like one. His 3-wood flew into the fescue rough and sent his ball bounding into the prickly bush. As he searched for the ball, that thorn snuck under his nail, leaving the ‘V’ in retreat.

Spieth was at eight under for the championship and — as has become tradition with him — now officially in hang-on-tight mode. He took his unplayable drop, tossed his ball into the green, and three-putted for double bogey. In six holes he hasd droppedthree shots. The lead was in someone else’s hands now. Somewhat improbably, that was Tiger Woods.

“I saw it on maybe No. 7 or 8 green, and it was on accident,” Spieth said of the leaderboard. “I looked up, and I saw Tiger at No. 1, and he was leading solo, and I went to Michael, I was like, ‘Dammit, I looked at the board, dude.’ I was frustrated at myself.”

For the next two hours, all Spieth made were pars. That was plenty good at Carnoustie, on what locals call a “proper links” day. But in the hour the followed that, nary a birdie. Not a single one. The wind gusts pushed 30 mph, turning the track into a creature the field hadn’t seen all week. Spieth’s game simply didn’t respond. The places where he found birdies in the first three rounds weren’t available to him Sunday, not the way he was positioning himself off the tee. Martyn Thompson, a caddie this week and competitor in the 1999 Open put it plainly on Tuesday, his feet standing in the rough: “If you spend too long in this stuff, it’s going to catch you eventually.”

Spieth learned it Sunday. Francesco Molinari was in all the right places, and he’s your Open champion. Sixteen pars and two birdies were more than enough. He won by two; not a square on his scorecard.

After Spieth three-putted for par on the 14th, a defacto par 4 listed as a par 5, he had probably figured his fate. There are no easy holes on this course, but that was the easiest one. Of the final 28 players to tee off, Spieth made one of just four pars on that hole. Sometimes you just don’t have it. His ball kicking forward over the 18th green and into a collection area was an appropriate visual. His birdie-less day would continue. Spieth two-putted his way home for another par. When playing partner Xander Schauffele’s putt lipped out, Spieth reacted as if it was his own. By then, he had long understood he wasn’t winning this one.

Sixty minutes had passed between that must-make birdie putt and when he signed for a 76. Of the final eight groups Sunday, his score was the worst. Meeting one last time with the media, Spieth was happy to talk about his pace of play, which was put on the clock. He was glad to talk about Molinari’s victory, the green speeds and if Woods’s performance was a fluke. Ten questions in, he was being pulled from the mic. His agent was annoyed, but Spieth continued. This British Open wasn’t his. It was someone else’s, so let’s talk about it. Acceptance can be a good thing, and that was the theme of his evening.

Perhaps he was just happy to turn his gaze on the PGA Championship, which sits just 17 days away. At Bellerive, near St. Louis, he’ll have another chance to complete the career grand slam. It’s an annual reminder that he’s won three majors already. He might win another five. Maybe even eight. He might come close and lose eight more, too. He seems to understand it quite well.