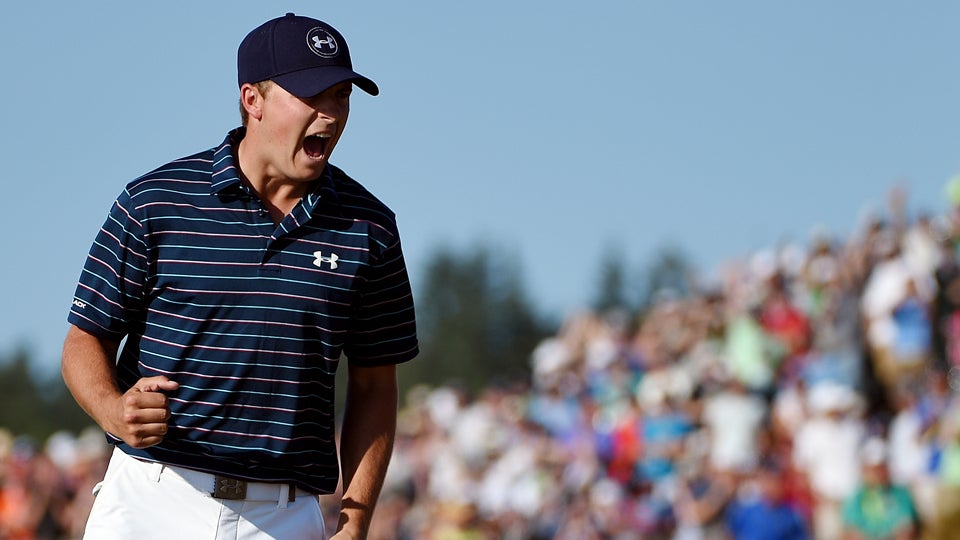 UNIVERSITY PLACE, Wash. – Chambers Bay was too bumpy, too dry and too brown. It had too many trains, and too much invasive grass in the greens, and it was too chock full of dunes for the fans to see anything.

In the end, though, the 115th U.S. Open was decided by the same thing that determines every U.S. Open: nerves. And the best player won.

Amid a firestorm of criticism directed at the USGA, second-ranked Jordan Spieth, the class of 2015 coming into the week, shot 69 and watched Dustin Johnson three-putt the 18th green from just 12 and a half feet to give America’s boy wonder Spieth his second straight major title.

“Someone had to hold the trophy,” said Spieth, who admitted he was not at his best from tee to green, and who dedicated the victory to his father, Shawn, on Father’s Day. “There’s noise around every tournament about a pin position here or the greens are this or the layout. Someone has to win it.”

RELATED: View the Final Leaderboard From the U.S. Open

Louis Oosthuizen birdied six of his last seven holes to shoot 67 and tie Johnson (70) for second at 4-under par, just a shot back.

“Too many mistakes that first round,” said Oosthuizen, who shot a 77 while grouped with Tiger Woods (80) and Rickie Fowler (81) on Thursday before rebounding with back-to-back 66s on Friday and Saturday.

“At the end of the day, golf is golf,” said Johnson, whose supporters here included his fiancé, Paulina Gretzky, and their son, Tatum, in addition to Paulina’s famous parents. “I’ve got my family and that’s most important to me. My trophy at the end of the day is holding up my little man [Tatum].”

Adam Scott shot 64, the low round of the tournament, to finish in a tie for fourth, two back, with Branden Grace (71) and Cameron Smith (68).

Jason Day, who was one of four 54-hole co-leaders and who became a crowd favorite as he fought through vertigo, faded with a 74 to tie for ninth.

“We kept on saying out there, ‘We’ve done it before; these guys haven’t,’” Spieth said of his back and forth with caddie Michael Greller, a Gig Harbor native and former Chambers Bay caddie whose guidance proved invaluable. “He deserves a lot of credit,” Spieth said.

“I told him all week that I have nothing but great vibes here,” Greller said, “starting with my marriage two years ago up there on the top of the hill. … But, you know, ultimately as far as my local knowledge, it really wasn’t worth anything, I didn’t think, because Jordan’s Jordan. He’s one of the best players in the world and I was just trying to stay out of his way.”

Perhaps it was appropriate that the Chambers U.S. Open, contested alongside a busy railway, would be decided by a metaphorical train wreck.

Johnson seemed like the likely winner as he shot a front-nine 33, but then his putter went cold on the way to bogeys at the 10th, 11th and 13th holes, and a mere par at the driveable par-4 12th hole. But nothing could prepare anyone for his ghastly mistake at the finishing hole.

After making a clutch birdie at the par-3 17th hole, and hitting the par-5 18th in two with a massive drive and a 5-iron, Johnson seemed to be on the verge of salting away his first major title until his eagle putt (to win) missed left and slid some three feet past the hole. Then he missed the comebacker to the left. A woman screamed. Others gasped and/or laughed in disbelief.

It was a sickening moment. The extravagantly talented Johnson, who had blown up with an 82 at the 2010 U.S. Open at Pebble Beach, and who had unknowingly grounded his club in a bunker on 18 to flame out at the PGA Championship at Whistling Straits later that year, had done it again.

The tournament’s final 45 minutes were chock full of both great and terrible shots. Grace pumped his tee shot out of bounds, on a path next to the train tracks, on the way to making a killing double-bogey 6 at the driveable par-4 16th hole. That seemed to put Spieth in control when he birdied the hole from almost 20 feet for a three-shot lead with two holes to play. 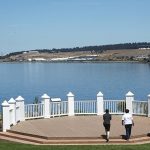 Spieth blew his tee shot right and into the dune grass at the par-3 17th hole and successfully blasted out and onto the green as a train passed, but he three-putted for his own double bogey to drop into a tie for the lead at 4-under par.

He recovered nicely, though, splitting the 18th fairway with his drive. His fairway wood second shot reached the green before he two-putted for birdie to get to 5-under par. “My goal was to get to 6-under,” he said, “so walking off the 18th green I was a little down and frustrated.”

He’d done enough, though, thanks to Johnson’s gaffe.

Rory McIlroy made a charge, going 6-under for his first 13 holes, but faded with bogeys at the par-3 15th and 17th holes and failed to birdie the 16th or 18th to card a 66. He finished at even par and in a tie for ninth place.

Johnson’s misadventure on 18 not only gave Spieth his third win this season and second straight major, it rendered moot, at least briefly, the non-stop chorus of complaints about Chambers Bay. Billy Horschel shot 67 to finish 25th at 4-over par and said, “I have not had a great week on the greens. And it’s not due to the fact that my stroke is off or my speed is off, I’ve hit a lot of really good putts that have bounced all over the world.”

Chris Kirk shot 78 to finish 21-over, last among those who made the cut, then tweeted: “The U.S. Open is a great tournament with incredible history. The USGA should be ashamed of what they did to it this week.” 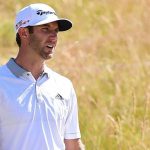 You may also like Dustin Johnson Finds Heartbreak, Comfort After U.S. Open Loss

Woods was far from fine, shooting 80-76 to miss the cut by 11 shots. He was overheard telling playing partner Fowler he could never figure out where to aim. McIlroy putted poorly and said of Chambers, “If they come back here in about 20 years time I’d be all right with that (laughter).”

Spieth and Johnson’s flash-bang ending rendered all of that moot.

“I don’t know right now,” said Spieth, who won $1.8 million and will try to make it three straight majors at the British Open at the Old Course at St. Andrews, July 16-19. “I can’t seem to wrap my head around the finish of today. I’ve tried to think about it since it ended and boy, I feel for Dustin.” 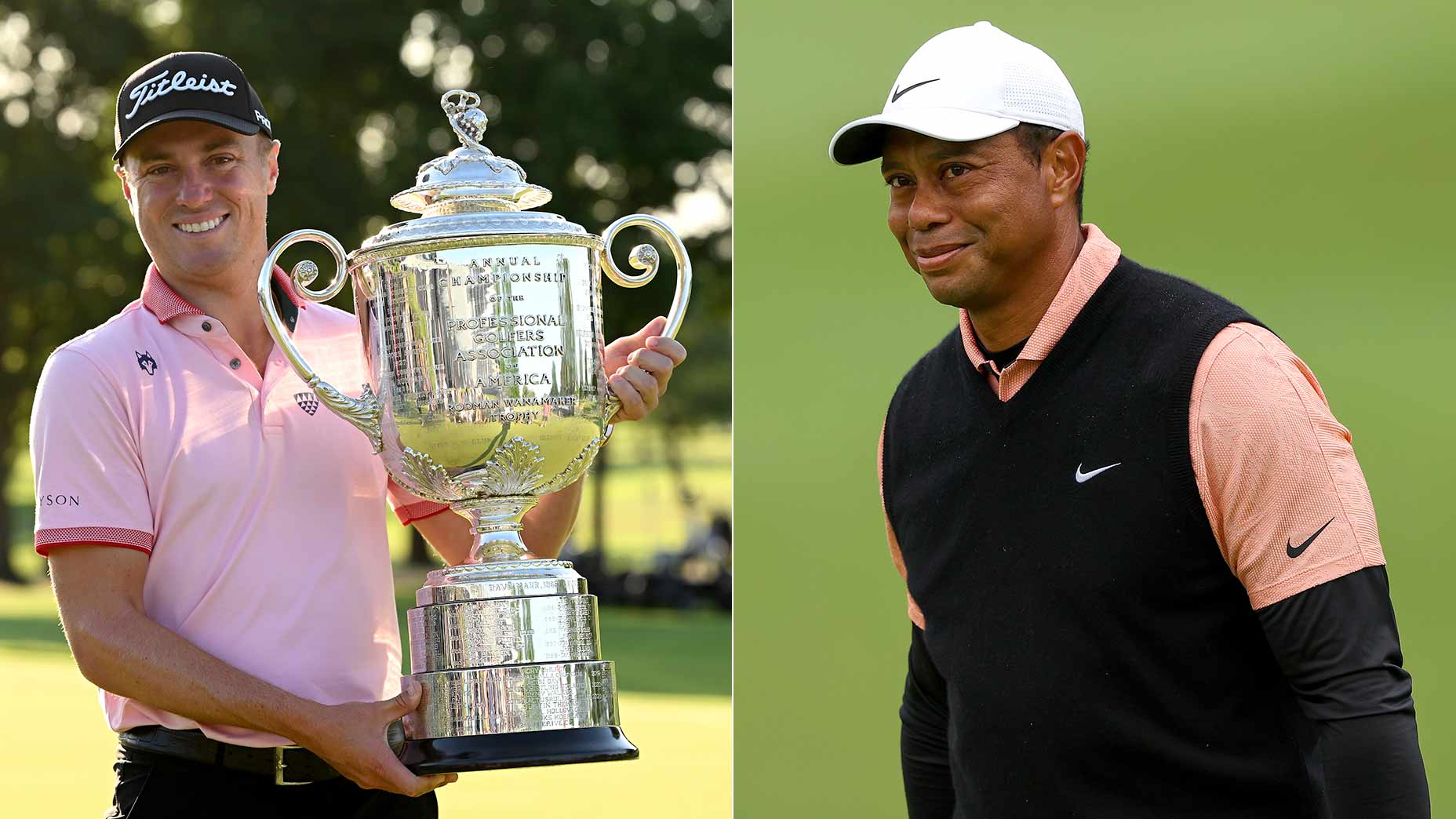