Jordan Spieth, St. Andrews and the Shot He Wishes He Had Back

(AP) — If he could take one mulligan this year, Jordan Spieth knows exactly where it would be — the final round at St. Andrews.

Trying to become the first player to capture the third leg of the modern Grand Slam, he was tied for the lead at the British Open until he missed an 8-foot par putt on the 17th hole and failed to birdie the 18th. Spieth missed a playoff by one shot.

But that’s not where he’d take the mulligan.

He had a long birdie putt on the par-3 hole that he ran so far by the cup that it stopped just off the green. He took three putts from there for a double bogey.

“I made a mistake, and it cost me at least a shot,” Spieth said. “The wind was sideways and it was into the rain and I was thinking it would be slow. I’d left it short all week and I didn’t want to leave that one short. And, obviously, I didn’t.”

Spieth figures if he had two-putted for par, the 50-foot birdie putt on the 16th “becomes the one that won the tournament.”

That’s a lot of conjecture. Then again, there are no mulligans in the majors. 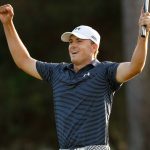 “You can say maybe the putt on 17,” Spieth said. “But everyone missed that putt — it’s not an easy one. And everyone says the wedge on 18.”

He came up just short of the 18th green instead of making sure he at least had a 25-foot look at birdie, as Zach Johnson did before him.