Jordan Spieth is an elite player in almost every category of his game. Check the stats. He’s a truly generational talent who, aside from his current stretch of sub-standard form, will undoubtedly right the ship before long.  But there’s one glaring weakness in his game: He’s not very good at short putts.

Even great players have strengths and weaknesses in their games — it’s nothing out of the ordinary. Spieth does a host of things well, but this one area is a weakness, and it’s statistically irrefutable at this point. Just once since 2013 has Spieth ranked inside the top 50 on tour from inside 10 feet.

The issue flared up against this week when Tiger Woods’ former swing coach, Hank Haney, claimed Spieth has the “yips.” Spieth himself says he felt “comfortable” with the putter. Either way, it’s an issue worth taking note of.

I spent the offseason watching hours and hours of footage of Jordan putting until I finally got a good handle of the cause of his short putting woes. So, why does Spieth tend to struggle with short putts?

First, it’s important to point out that Jordan is amazingly good at holing birdie putts. Jordan’s finished in the top 3 at birdie conversion percentage in four of the last six years. His average ranking over that time was eighth. He’s also consistently ranked in the top 3 on the PGA Tour in putting between 15 and 25 feet.

So what’s Jordan doing well on those longer birdie putts that he’s not on the shorter par putts? 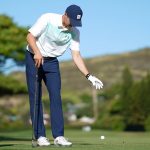 You may also like ‘Whoa, whoa, whoa’: Jordan Spieth nearly violates new rule one day after ripping it

Here’s Jordan lining up a couple of long birdie putts that he ends up making.

Look at how much he’s moving. Feet moving, looking at the hole, getting all that nervous energy out until he looks nice and loose. When he’s ready to go, there’s quick a forward press and then he pulls the trigger.

Now, here’s Spieth on a couple shorter putts he ends up missing.

Look how much less he’s moving. He looks so stiff, almost like he’s frozen. All that nervous tension has nowhere to go because he’s not moving around like he was on the longer putts, so when he pulls the trigger, it all comes out at once

It’s especially stark when you place his mannerisms on longer putts vs. shorter putts alongside one another. On the left, when Spieth is putting from his favorite birdie zone, you can see that he’s constantly moving. On the right, he’s so still it looks like the frame is frozen (it’s not).

Occasionally you can see Spieth work around this by looking at the hole on short putts, and it’s a decent solution to the problem.

Here he is at the Ryder Cup. You can see him almost freeze again, but then he looks up at the hole at the last moment before making his stroke. It gives him that little bit of movement that he needs, which helps him knock it in.

So what does Jordan need to do? And what can you learn if you have the same problem?

Jordan needs to force himself to move around before he pulls the trigger on those shorter putts, the same way you’d waggle a club before a full shot. Don’t just stand there; move your feet, move your head, allow all that nervous energy to escape, then when you’re ready quickly pull the trigger — but keep moving every step until you do.

Jordan needs to move around more, and if you’re struggling on short putts, you should try it, too.