Jordan Spieth on verge of silencing critics at Colonial 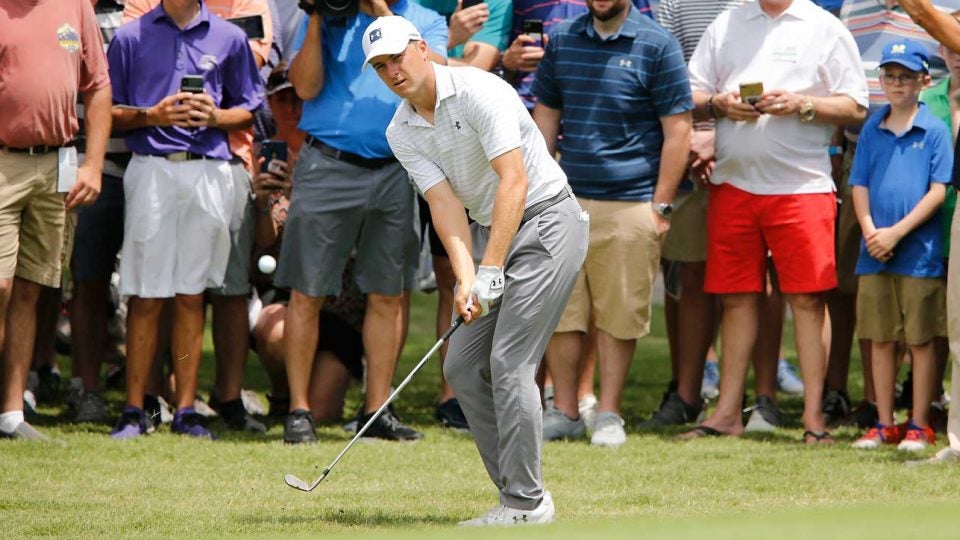 Jordan Spieth is on the verge of a victory. Will he get it done?
Getty Images

Jordan Spieth is in position to silence the critics at the Charles Schwab Challenge.

Spieth trails Kevin Na by two shots entering the final round, his greatest chance at a victory since last year’s British Open at Carnoustie. He bowed out of contention on the back nine at the Open, and has not won on the PGA Tour since the 2017 Open at Birkdale 22 months ago.

Spieth’s greatest facet this week has been his putter, leading the field in strokes gained: putting. Spieth’s three-day total of 434 feet 4 inches of putts made (which is already a career high) is on the verge of a PGA Tour record. Ben Martin made 551 feet, 2 inches of putts at this event in 2015.

“To see some of these long ones go in, you know, and kind of look like they’re going in with ten feet to go, that’s really cool,” Spieth said after his second round Friday. “It’s been a couple years in the works.”

His round Saturday started no differently. Spieth tossed his approach on the first to 29 feet, from which his first putt of the day fell for a birdie. He followed it up with another birdie on 2 and made 14 pars on the final 16 holes to short 68.

A big start for @JordanSpieth.

He sinks it from 29 feet for birdie. ?#QuickHits pic.twitter.com/UFjaLj6KfN

It was a particularly difficult scoring day Saturday for the leaders at Colonial Country Club. Tony Finau shot an even par 70 from the penultimate pairing while Na carded a 1-under 69 from the final pairing. Playing alongside Na, Jonas Blixt made zero birdies en route to a 74.

While a victory isn’t necessarily the only evidence of progress for Spieth, it would stand to silence chatter about his recent form. Only last week did he notch his first top 10 of the season, losing to Brooks Koepka by six strokes at Bethpage Black. And for Spieth, a man whose career quickly jumped from promising to a matter of “how many victories will he gather?” failing to win again will be a let down for some, whether that’s fair or not.

Spieth will begin his final round at 1:55 p.m. ET, playing alongside C.T. Pan, one group ahead of Na.