SOUTHPORT, England — Even when Jordan Spieth was in trouble, he wasn’t.

Rain poured down as he took an awkward stance off the 10th green Friday at Royal Birkdale. Caddie Michael Greller held an umbrella over Spieth as he took one quick but purposeful practice swing after another.

Greller backed away. Spieth took his club back, made contact, and drained it. That’s when he really got going.

Spieth’s magical chip on 10 kept him in a four-way tie for the lead at this 146th British Open, but it didn’t take long for the 23-year-old Texan to take the reins at golf’s oldest championship.

Spieth battled the wind and rain as the British Open finally introduced traditional British Open weather, and he carded a one-under 69 to grab a two-shot lead heading into the weekend. He’s six under for the tournament, two shots ahead of Matt Kuchar and three ahead of Ian Poulter and Brooks Koepka.

While Thursday produced a few spurts of strong winds, Friday was a real challenge. The wind howled early and the rain dumped late. After 39 players broke par in the first round, only eight reached red numbers on Friday. The rain started to fall a few holes into Spieth’s round, and after opening with a birdie he made two bogeys and turned at one over. His chip-in on 10 pushed him into a tie for the lead. That’s when play was briefly suspended for 15 minutes and the rain poured down and the grounds crew squeegeed the greens. When play resumed, Spieth took advantage of a brief period when the wind dropped. He rolled in a long birdie putt on 11, then knocked it close for a kick-in birdie on the par-3 12th. That got him to six under.

“My patience wore a bit thin around the turn. I was able to regroup,” Spieth said. “That chip-in was massive for par. We had less wind for maybe, I would say a total of two hours today we had less wind than the guys had this morning, which makes a significant difference. And fortunately we were able to take advantage of those holes and that was key.”

“Not on the good end of the draw, but we seem to have grinded it out,” Spieth said. “I don’t know if we’d be in any better score if I was on the other side of the draw. You just don’t know where your breaks fall and where they don’t.”

On the other end of the draw, in the morning, was Kuchar. He finished before the rain came in and shot 71 to take the early clubhouse lead at four under. He and Brooks Koepka and Spieth were tied for the lead after the first round.

Poulter also called his round “boring,” but it was just dull enough to keep him in the mix. He shot an even-par 70 and is three under, three off the lead. He’s in the penultimate pairing Saturday alongside U.S. Open winner Brooks Koepka (72), who is also three under. 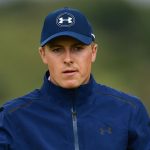 Sitting just five back is Rory McIlroy, who finessed his way to three birdies in six holes before battling through stronger winds the rest of the way. His two-under 68 was tied for the second-lowest round of the day (Zach Johnson shot 66). McIlroy’s bogey on 13 was his first in 25 holes after he made bogey on five of his first six Thursday.

His biggest highlights came on 10 and 11, when he drained a pair of fist-pumping putts from beyond 10 feet to save par.

“I made some key up-and-downs on the start of the back nine,” McIlroy said. “To be in it after two days and be under par for this championship after the way I started, I’m ecstatic with that.”

Rickie Fowler and Masters champ Sergio Garcia are both at two over, and Dustin Johnson and Jon Rahm are three over. Johnson hit a 290-yard 2-iron into a pot bunker on 18, was only able to advance it 15 yards and closed with a bogey.

Phil Mickelson, who so valiantly dueled with Henrik Stenson during last year’s Open, is going home early. He tripled the 3rd hole and closed bogey-boge to finish 10 over and miss his first cut of the season.

“I missed (the cut) with flair,” Mickelson said.

Friday’s topsy-turvy forecast will give way to a calm Saturday. Overcast skies are predicted and winds aren’t expected to blow more than 12 mph.

Spieth will play in Saturday’s final pairing alongside Kuchar, a teammate and fellow “pod” member during the past two Ryder Cups.