After 45 winless months, Jordan Spieth sure feels ‘back’ at Augusta National 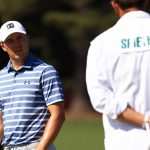 Jordan Spieth is the 38th-ranked player in the world, but according to Vegas has the 2nd-listed favorite at the 2021 Masters.

AUGUSTA, Ga. — Whether or not Jordan Spieth won on Sunday night in San Antonio, his Monday afternoon was going to begin the same way: with a drive down Magnolia Lane. That’s a reservation just about nothing can mess up. But the fact that he actually did the deed — winning the Texas Open by two for his first victory in nearly four years — somehow changes everything here, at the 85th Masters.

Spieth rolled in around noon local time, took a peek at the practice green and headed straight to his second press conference in about 18 hours. The questions were a bit different in Georgia than they were in Texas, but the answers came again from a man in relief. He had exhaled in a big way.

“I wanted that monkey off my back,” Spieth said Monday afternoon. It’s over, whatever it was.

Despite what our limbic systems would like us to believe, Spieth’s victory in Texas doesn’t remove Dustin Johnson from the field. Nor does it give him a two-stroke lead on Justin Thomas. It doesn’t earn him a preferred tee time or help him chip any better than Jon Rahm. But a quick glance around the Tour shows one man who has been trending for months and a bunch of others just treading water.

Johnson has been battling an oddly balky driver, which pales in comparison to whatever Rory McIlroy is going through. Victories from Collin Morikawa and Bryson DeChambeau and Thomas caught our attention in the moment, but each feels more distant with every passing day. Just one victory over Charley Hoffman was somehow all it took to make the 38th-ranked player in the world the 2nd-ranked favorite in Vegas. Droughts will do that. Spieth can do that, too.

“It’s actually been a lot easier for me, over the last 12 hours, to just look forward versus kind of looking back, I guess,” Spieth said. “That’s exciting.”

There was no time for a true celebration Sunday night with family and friends, so there was no hangover (figuratively or otherwise) on Monday. Spieth settled in with a two-hour range session in front of his coach, his caddie and a Titleist rep swapping driver shafts in and out. There’s always something worth improving, but there were smiles all around. He putted plenty on that practice green, appreciative of the return of spectators. He didn’t play any holes, but he hardly needs to. He’s taken just two weeks off since January, one of them for a World Golf Championship he hadn’t qualify for. How long ago does that feel?

Spieth has explained his struggles to the press hundreds of times in the last three years. He’s blamed his mechanics at times and his hastiness at others. He’s done it at length and in short, but perhaps never more simply than on Monday, with all the hindsight one can gain from a quick, private flight over Louisiana, Mississippi and Georgia.

“I just got further off than normally professionals get,” Spieth said. “So it’s been a climb back.”

He was off further. But ‘back’ feels genuinely appropriate, too. Of all 88 first-tee shots we’ll watch Thursday, no one else’s will hold more intrigue. Now that Spieth is back, he’s on to answering the next question: What’s next?