Somehow, one of the most famous golfers in the world threw down a top-three finish on Sunday at the PGA Championship and flew way under the radar. But Jordan Spieth did just that at Bethpage Black, leaning on his trademark weapon — the putter — to post a four-day total of two-under 278.

On the final leaderboard, only Brooks Koepka and Dustin Johnson were better than Spieth. On the greens? Nobody was even close. Spieth gained 10.6 strokes on the field with his putter, more than three shots better than anyone else (Luke List was second, at 7.2). That 10.6 figure also represents the highest in Spieth’s career, making this the best statistical putting week of Spieth’s PGA Tour career (per Justin Ray).

Not bad for someone mired in a slump.

Spieth, who tallied 394 feet, 4 inches of putts on the week, said afterwards that the result represents the progress he has made in recent months and is a testament to his own patience.

“It says that I have full belief in our team. I have full belief in my process, my mentality, my selfishness and my work ethic,” he said. “I put in more hours over the last five months than I’ve ever put in my game in a five-month stretch, just trying to get to where I can be out here on a major championship Sunday making par saves, making birdie putts, and contending even without having my best stuff. That’s like 2015, 2016, 2017, that’s how I felt then.” 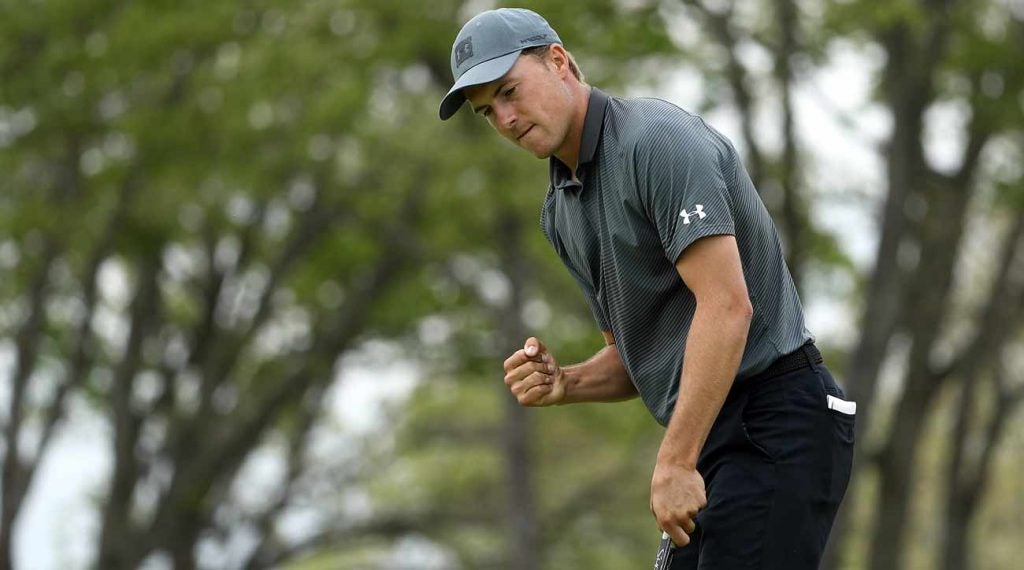 By the numbers, Jordan Spieth just wrapped up the best putting week of his life.
Getty Images

Spieth pocketed $575,500 for his T3 alongside Matt Wallace and Patrick Cantlay. He also jumped to No. 30 in the world, up from 39. And the week did wonders for his season-long stats, too: Spieth is now the 11th-ranked putter by strokes gained on the PGA Tour this year.

Still, Spieth isn’t concerned with stats so much as results. In that vein, Sunday was an even greater success: The T3 represented his first top-10 finish since last year’s British Open and his first top-three since the 2018 Masters, more than a year ago.

“This is the best I’ve felt in quite a while. I’m very happy,” Spieth said. “I knew coming into the week that it was unlikely on this golf course that I was going to have a chance to win, and that’s a humbling feeling for me.

“But I knew that if I played the course the right way, had the right mentality, kept putting the way I’ve been putting, that I would be in it; that I would be, you know, in and having a chance to make some noise.”

Spieth’s next start is expected to come this week at the Charles Schwab Challenge.