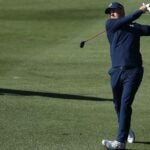 Jordan Spieth is doing things even he's impressed by.

It’d be impossible to sum up the last three years of Jordan Spieth’s career in only a single shot. No moment or microcosm is capable of cutting to the core of the rollercoaster Spieth has endured since his last major victory at the Open Championship in 2017. Even Spieth’s 2021 “return” has been exceedingly Spiethian, riddled with fits and starts — a markedly jagged line back toward the player who once was. As such, Spieth himself has struggled to put his resurgence in the proper context, often declining to comment about where he views his own return.

But if there were a single moment capable of encapsulating how far Spieth fell — and how much progress he’s made since — it came on Friday afternoon at the CJ Cup.

The moment came on the 6th hole, a 604-yard par-5 that saw the 28-year-old staring down a moment of pure discomfort. Spieth’s ball sat 313 yards in the fairway and 286 yards from the flag. With a hurting wind water leaving misses left, right and short completely dead, he faced his least-favorite shot in the bag: a true, smoothed 3-wood.

At various points over the last several years, the fairway wood has caused nightmares for Spieth, who’s struggled not only to find the center of the clubface, but also a consistent ballflight with the club in his hand. With wind in his face, the situation grew even more dire, as the air pushed his mishits further in the wrong direction.

But Spieth was having a good Friday at the CJ Cup. He was in contention after a six-under 66 on day 1, and had already racked up a pair of birdies by the time he stood over his approach shot on the 6th. After a short conversation with Michael Greller, his caddie, Spieth pulled the 3-wood. A few seconds later, he pulled back the club and swung, smashing his ball high over the water and bunkers and onto the tiny green. When his ball came to rest, it sat just 15 feet from the flagstick. A few minutes after that, he drained the putt for eagle.

Sure, it was an innocuous moment in a tournament contested on a largely toothless setup — three other players made eagle on Friday at the 6th, which played as the fourth-easiest hole on the course. But to Spieth, it was so much more than that.

“It was funny, after I hit the shot and I walked over to Michael [Greller], I’m like, I’m laughing at how I had no chance hitting that shot at this tournament last year if we’re
here,” Spieth said. “So progress is made to step up and trust it into the wind.”

For Spieth, the moment represented a crystal-clear image of the strides his game has taken over the last 12 months. Of course, it helps that he’s entering the weekend at the CJ Cup tied for second place, but he’s contended in other events during this stretch. Rather, this moment was so significant because it represented something the three-time major champ hasn’t had since those early years: the confidence to hit an uncomfortable shot in the precise moment he needs it.

“If I hit it off the heel at all, it’s in the water. If you toe it at all, it’s in the desert. It was 280 yards into the breeze, you’re at altitude, but I needed to hit a striped 3-wood,” he said. “It was a cool shot kind of for me personally because that’s one, especially with a 3-wood into the wind, that I really struggled with.”

After almost a year of denying it, it seems the last person has been convinced that Jordan Spieth is, in fact, back: himself.