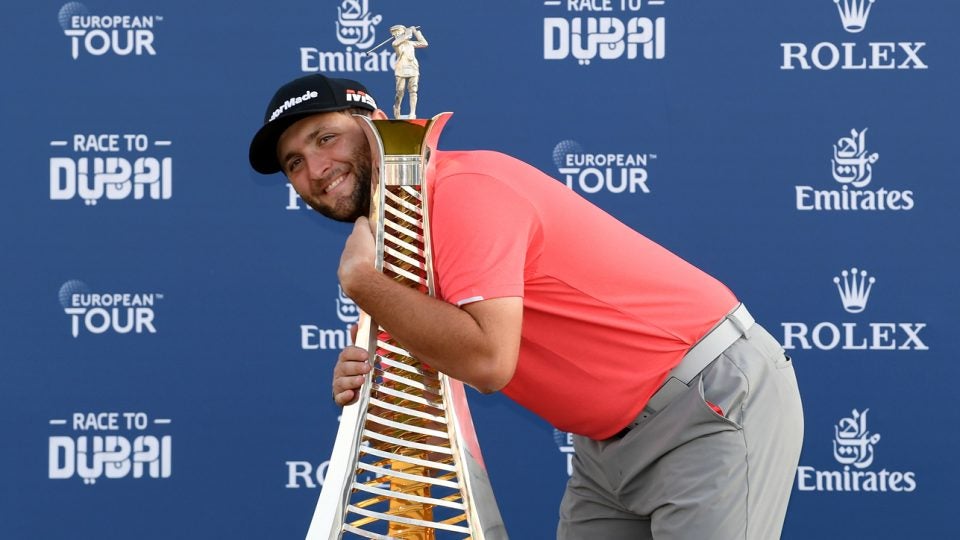 Jon Rahm took home a lot of money to go with this trophy Sunday.
Getty Images

Quietly, Jon Rahm had an incredible European Tour season, finishing it off by winning the DP World Tour Championship Sunday by one stroke in Dubai.

Rahm shot a final round 68 to beat Tommy Fleetwood with a birdie on the 72nd hole. It wasn’t exactly a cakewalk, though. Rahm had to get up and down from a tricky green-side bunker spot on the 18th hole. His soft sand-splash rolled and rolled and rolled out to three feet, where he would clean up his 4 and pump his fists in victory.

Rahm, just barely 25 years old, now has six career European Tour victories (three coming this year) and his first Race to Dubai title. He became just the second player from Spain to accomplish the feat, joining Seve Ballesteros, who did it three times (1986, 1988, 1991). Rahm took home a $2 million bonus for his Race to Dubai victory, a nice paycheck to wrap up his Euro Tour season.

Fleetwood certainly made it difficult on him. The Englishman rallied on the back nine, making five birdies to shoot 65 and post a clubhouse lead of 18 under. When Rahm bogeyed the 15th, they were tied, leaving Fleetwood to watch the finish from the clubhouse.

Elsewhere, Rory McIlroy’s polar week continued. After opening with a 64, and giving his momentum back with a 74 in the second round, McIlroy’s 65 Saturday put him in position to win another Race to Dubai Championship himself. But three bogeys to just two birdies on Sunday left him with a 73 and a 4th-place finish. We likely will not see him play again competitively until 2020.