Jon Rahm’s viral ace and 12 other shots that left fans saying, ‘How’d they do that?!’ 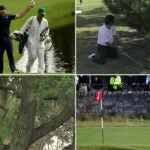 Every so often the pros remind us that they're way, wayyyy better than the rest of us.

It was the shot heard ’round the social-media world.

With his pond-skimming ace during Tuesday’s practice round at the Masters, Jon Rahm set the Twittersphere ablaze and forever burned his name into tournament’s lore.

Yet Rahm was not the first player to intentionally skip one off the water into the jar at Augusta National’s 16th hole (Vijay Singh did the same in 2009), and he was far from the only Tour pro to pull off an outlandishly unorthodox one-off.

A dive into the archives reveals a dozen other of the zaniest-how’d-they-do-that golf shots of all time.

Countless golfers knelt before the greatness of Seve Ballesteros. In this case, though, it was Seve himself who got down on his knees, executing a ridiculous 3-wood escape from a drive he’d left under the trees.

In a famous scene from Tin Cup, David Simms (Don Johnson), wins a distance wager against Roy McAvoy (Kevin Costner) by bounding a shot down an asphalt road. Let’s call it a case of art imitating the life of Lee Trevino, who is said to have hustled another golfer by betting he could drive it 400 yards, and then doing exactly that — by hitting his ball down a cart path. Stalking Tiger down the stretch on Sunday at Medinah, El Nino struck a drive on the par-4 16th that wound up against the trunk of un arbol. No problema. Throwing caution to the wind, the 19-year-old Garcia slashed his next swing with a 6-iron, eyes closed to protect them from woody shrapnel. The shot came off perfectly, corkscrewing toward the green with the 19-year-old Garcia hop-skipping up the fairway after it. How could you not, um, root for this guy?

The first shot was a failure. But the second was a flop. After putting (yes, putting!) his approach from 70 yards out in the fairway on the par-4 13th hole, Mickelson left himself short-sided to a pin cut left on a lightning-quick green. You can guess what happened next. Taking a full swing with a wedge fanned open, Mickelson hit a moon shot to end all moon shots, the ball traveling higher than it did far and cozying up close to the cup. A flop transformed into an up-and-down success.

champion golfer of the year wholly unimpressed by the flop shot of the century pic.twitter.com/03PurZlp5S

Jimenez’s back wasn’t up against a wall on the Road Hole at St. Andrews. But his ball was. Instead of taking a drop, the Spaniard took a risk, playing an aggressive carom shot off the wall that landed, improbably, on the green.

With his ball partly submerged in a pond beside the 17th green during a playoff at East Lake, Haas put on a splashy showing, hitting a bunker-style explosion shot out of the drink to tap-in range. Water: a key element in Haas’ FedEx Cup title win.

Some toe jobs are better than others, like the shot Singh pulled off on the par-5 16th hole. With his ball sitting in the collar, near the railroad ties beside the lake, Singh used the toe of his putter to chip in for eagle. The crowd went wild. Singh went on to finish in second place.

8. Phil Mickelson, Throughout His Career

Play the Mickelson highlight reel forward, and you’ll see an impressive compilation of backward flop-shots. But this one, from a short-game instructional video, has to rank among Phil’s best.

Purtzer with a putter. The phrase rolls smoothly off the tongue. Just as Purtzer’s ball rolled smoothly from the sand into the cup when he putted from a bunker on the 13th hole on Sunday at Colonial Country Club. A Texas wedge in Texas for an unlikely that helped seal Purtzer’s win.

As his buddy Rickie Fowler put it later, Bubba “was in the wrong place at the right time.” The place was the pine straw right of the 10th fairway. The time was the second hole of a playoff against Louis Oosthuizen. And the shot was an intentionally hooded wedge, hooked through a tunnel of magnolia and pine trees and onto the green in regulation, setting Watson up for the first of his two Masters wins.

No disrespect to his shot from the tree trunk at Medinah, but this one from the tree branches was better still. It happened on the 10th hole at Bay Hill, where Garcia climbed into the canopy to identify his ball, which was nesting like a bird, then smacked it backwards and one-handed back into play.

On the 14th hole on Sunday, with the tournament on the line, Pavin’s ball settled in a crevice in a lateral hazard, up against a tree root. Otherwise it was a perfect lie. As the on-course commentator proclaimed him “dead,” stayed alive by turning an 8-iron around and gouging the ball out left-handed. The miracle shot jumped out the hazard, across a cart path and settled about three feet from the cup.