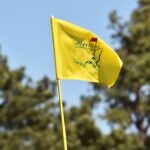 A 19-year-old from the Cayman Islands has qualified for this year's Masters.

There are 27 holes of golf in the Cayman Islands. There are an estimated 71,000 residents. One of them will be teeing it up in this year’s Masters Tournament.

The story of Aaron Jarvis’ journey to Augusta National — well-earned at the Latin American Amateur Championship on Sunday — is an unlikely one.

It’s unlikely because of where he grew up, a small self-governing British territory in the Caribbean with no golf pedigree and limited facilities. It’s unlikely because Jarvis took to soccer first before following his older brother onto the golf course and ultimately falling hard for the game.

It’s unlikely because his journey required his moving to Florida for high school and training at the David Leadbetter Golf Academy, where plenty of promising prospects begin but it’s awfully tough to stand out.

It’s unlikely because before this week, the last time he teed it up at Casa de Campo’s Teeth of the Dog course, he made an 11 on one hole and missed the cut. It’s unlikely because entering the week he was still the 1669th-ranked amateur golf in the world, despite his ascension to the UNLV team, where he’s a first-year.

Things seemed unlikely for Jarvis even during Sunday’s final round. They seemed particularly unlikely after a bogey-double bogey stretch at No. 8 and No. 9. And they seemed unlikely again when he splashed his tee shot in the water on the par-3 16th — but suddenly more promising when he holed a lengthy bogey putt, fist-pumping before it even hit the bottom of the cup.

Things still seemed unlikely even after Jarvis made four birdies on the back nine to finish out a final-round 69. He clung to the clubhouse lead and watched more-decorated competitors play the short par-5 18th, and even though they were well-positioned to make eagles and birdies to force a playoff but couldn’t quite convert.

Big-picture, Jarvis’ trip to Augusta National was unlikely because until a few years ago there was no such path to the Masters. The Latin American Amateur Championship was founded in 2014 by the Masters, R&A and USGA in an effort to grow golf in the region. Past champions include Joaquin Niemann, the 23-year-old Chilean who has become a mainstay on the PGA Tour.

“Honestly, I can’t even get the words out,” Jarvis said after his round to tournament staff. “I just tried to get myself to have some good birdie looks and they went in.”

Jarvis is the first Caribbean champion in the event’s history and he’ll be the first Cayman golfer to compete in the Masters. And when he tees it up this April at the biggest tournament in golf, he’ll be a beacon for future golfers from his region — and potentially inspire the next unlikely story to follow in his footsteps.