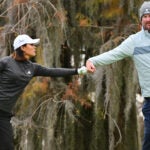 Danielle Kang and Derek Lowe won their respective divisions at the Hilton Vacations Tournament of Champions.

If you believe everything you read, the best golfers in the world are those with an internet connection, a keyboard and access to a comment section.

A contingent of brave users of Twitter dot com have been periodically disparaging of the talents of LPGA pros, suggesting that male golfers with scratch handicaps could compete on the top women’s tour in the world. One four-handicap in particular became a punching bag in the summer of 2020 when he typed the following: “Anyone with a 4 handicap would likely shoot mid 60s from forward tees.”

It’s worth noting that most sentient beings would not take the argument that far, but it echoes a general dismissiveness of the talent on display every week on the LPGA.

Good news: This week, we got some very specific evidence just how wrong that notion is. Enter this week’s Hilton Vacations Tournament of Champions, where some terrific amateur golfers teed it up alongside some terrific LPGA pros. As Golf Channel’s Tom Abbott pointed out: They played in the same groups, from the same tees, in the same conditions. The celebs had the advantage of playing a stableford format, which is slightly more freeing than straight stroke play, but as far as head-to-head tournament play goes, this was a pretty good comparison.

But let’s break it down further. Derek Lowe, a retired pitcher who plays to an index of 0.2, played well all week and earned a spot in a playoff against all-time great Annika Sorenstam. His scores for the week: 76-72-75-72 and a very respectable total of seven over par. That still would have left him 23 strokes off Kang’s pace of 68-67-69-68.

Mark Mulder is another retired pitcher who plays off scratch and has teed it up (via sponsor’s exemption) on the PGA Tour in the Safeway Open. He finished third with rounds of 77-74-80-75 (+18).

Mardy Fish is widely recognized as one of the best players on the celebrity golf circuit; he’s a winner of the American Century Championship and plays off a handicap of +2.8. He shot 81-70-73-82 to finish sixth. His second round was the only celebrity score recorded under par.

You get the idea. Golf is hard, and despite the distance advantages on display from Lowe, Fish and others, even the best male ams would have beaten just a few LPGA pros off their games this week.

Need more evidence? Don’t listen to me — listen to the pros themselves.

Compelling testimony from Lowe: “You’re seeing the best players in the world. I don’t think people understand how good they are until you get inside the ropes, watch the quality of the shots.

“I’ve been very fortunate, have been for three days, to play with Nelly Korda. She outdrove me probably 90% of the time. They don’t understand the talent. Watching Annika today, it’s just a true honor to play, and people need to come watch them play because they are extremely talented and great.”

From Wells Adams, who shot a first-round 78 alongside Ariya Jutanugarn:

“We all watch the LPGA and the PGA on TV, but you don’t really get to see how good they are until you’re right next to them.

“That girl is so amazing, and she doesn’t carry a driver. She just hits 3-wood. I hit the ball pretty far. She outdrove me almost every hole with a 3-wood. That was a nice ‘Wells, come back down to earth; you’re not very good at this game.’

“But like the thing that separates these women from everything is how pinpoint accurate they are from long range. That’s the difference between the weekend warriors and these guys is they can hit 6- and 5-irons to five feet.

“Seeing that is just bonkers. So much fun to witness.”

“They shock me how far they can hit it, how they can control the ball. I mean, it’s just a whole ‘nother level of golf. We’re used to playing with our buddies, and you can see someone that can shape shots and have every shot in their bag is just amazing.”

Fodder for your next 19th-hole discussion — or your next Twitter war. But a reminder: in online arguments, there are no winners.