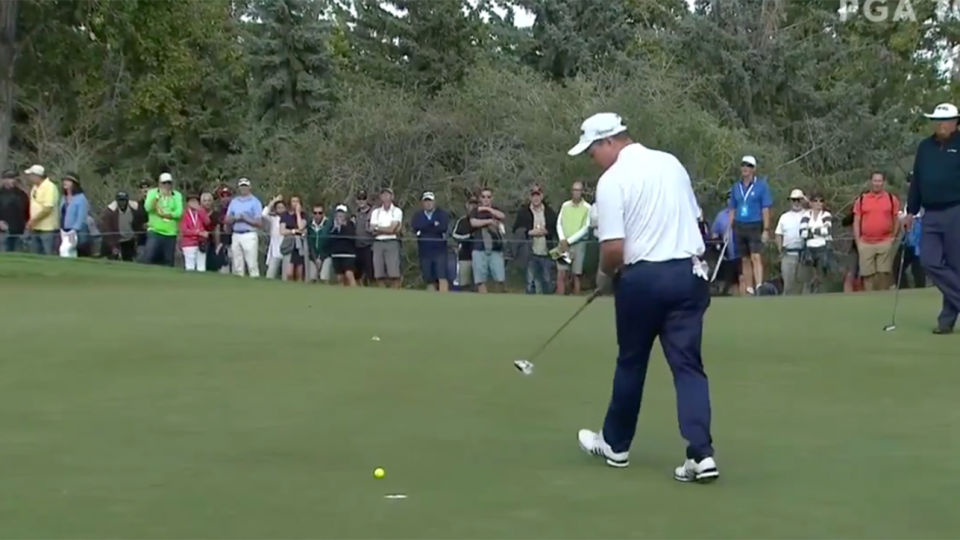 Durant reacts as his short putt on the 71st hole lips out.

All you could was cringe.

When the telecast of the PGA Tour Champions event in Calgary, Canada, cut to a replay of a tap-in that then-co-leader Joe Durant had on the 53rd (and penultimate) hole, you knew what was coming next.

Durant casually stepped in, his right heel raised off the ground so as not to his disrupt his partner’s line, and — yep — missed it.

The putt caught the left edge of the hole and lipped out, leaving Durant stunned and the announcers calling the Shaw Charity Classic all but speechless. Among their remarks: “Wow,” “Oh, boy,” and “My goodness.”

Durant misses a short one at 17 and falls out of a share of the lead. @ShawClassic pic.twitter.com/3IXLGWd2iW

The yank resulted in a bogey 5 on the 17th hole. Credit Durant with bouncing back with a birdie on the par-5 closer, but alas it wasn’t quite enough. Durant came up a shot short of Scott McCarron, who also birdied 18 to sign for a 63 and the title.