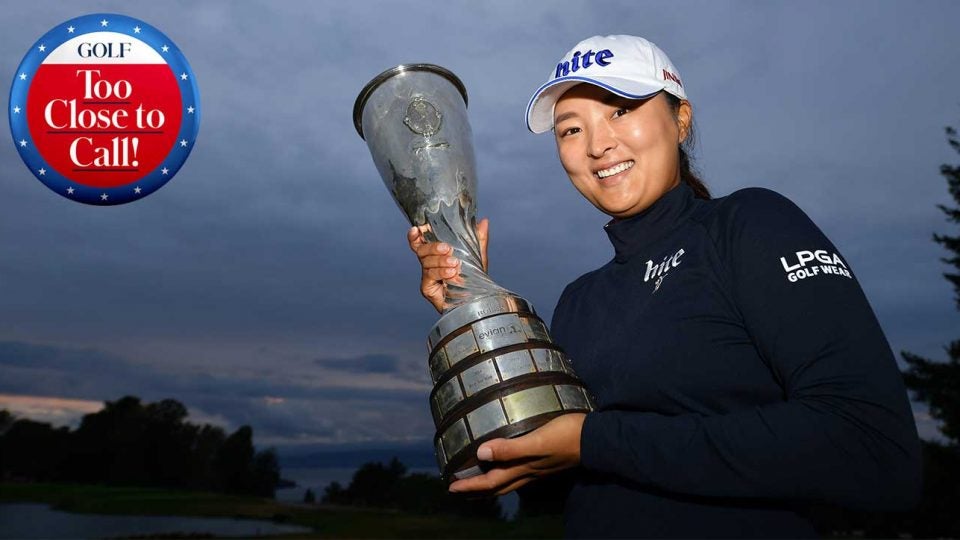 The write-in vote for Player of the Year was unusually strong for LPGA phenom Jin Young Ko.
Getty Images

With last season’s PGA Tour campaign in the books (and the next already begun), finalists have emerged in the race for GOLF’s 2019 Player of the Year. Votes in the past have tipped in favor of one or two candidates. This year, there are four — all worthy and all with passionate supporters. And the POTY is …? Pick ’em. We’ll make our case for the four frontrunners and let you decide. Sean Zak already made his case for Brooks Koepka, Dylan Dethier for Rory McIlroy and Michael Bamberger for Tiger Woods. In our final installment, here’s Alan Shipnuck on Jin Young Ko.

The case for Jin Young Ko

There are many ways to quantify the brilliance of Jin Young Ko. At press time, the ascendant 24-year-old led the LPGA in money, scoring average and greens in regulation. She had four victories in the 2019 season—more than any other woman, to say nothing of Brooks Koepka or Rory McIlroy and Tiger Woods—and they were cherry-picked from the game’s most glamorous events: the Dinah Shore (aka the ANA Inspiration), Evian, Founders Cup and Women’s Canadian Open.

There are increasing comparisons to the deity Annika Sorenstam, but it’s not the superlatives that matter; it’s one number above all else that speaks to Ko’s genius and her dominance: 114. That’s how many consecutive holes she played without a bogey, spanning three different tournaments, including a blemish-free win in Canada when she dropped a final round 64 to go 26 deep and dust the field by five strokes. This DiMaggio-esque streak bettered Tiger Woods’ record 110-hole binge in 2000, the season during which he merely played the greatest golf of all time. Ko hasn’t been quite at that level in 2019, but she is, without question, the Player of the Year in all of golf.

The only other competitor who can match Ko’s haul of two major championships this season is Steve Stricker… and he did it as a part-time player on an old-guy exhibition circuit. And Ko kind of/sort of added another one in October when she won the Hite Jinro Championship, a major on the Korean LPGA tour.

For those who want to prattle on about Rory’s Strokes Gained dominance or Brooks’s top 10s or other trifling stats, the easy rebuttal is that other number: 114. “I mean, I’m thrilled if I can go nine holes without a bogey,” says LPGA veteran Christina Kim. “Seriously. It’s beyond insane that she went 114. What Jin Young did this year is as close to playing perfect golf as anyone ever has.”

Kim describes Ko as a “combination of Annika and Inbee,” which is to say a ball-striking machine who seemingly never misses a putt. “She is the most consistent player I have ever seen,” adds Kim. “She makes the extraordinary look really simple. You’ll be paired with her and think to yourself, What’s the big deal, she’s only playing okay, except then you realize she’s, like, 7-under through 11 holes.”

The 2018 LPGA rookie of the year made a big leap forward with a markedly stress-free performance at this year’s Dinah Shore, the first major championship victory of her young career. But Ko’s major double-dip at the Evian Championship was more emblematic of the player she has become. Locked in a tense battle with the 2014 champ, Hyo Joo Kim, Ko played what she modestly called “a little perfect” golf. Kim finally cracked, triple-bogeying the 14th hole. Annika watched the telecast and saw plenty of herself in Ko. “She doesn’t have any weaknesses and she doesn’t get rattled,” says Sorenstam. “And she has a very simple swing that repeats consistently under pressure, which is one of the hardest things in golf to find.”

Annika admits there was something eerily familiar in the way Ko pulled away on the back nine. “The best feeling in the world is when you stand on the first tee on Sunday of a big tournament and you know if you just play your normal game you’re going to be right there at the end,” she says. “In a sense you can play stress-free in what is a very stressful situation. The other players feel that, and when they know you’re not going to make mistakes and you’re not going to go away it forces them to try to do something special, and they often push too hard. You’re starting to see that with J.Y. I’m not sure if it’s intimidation, but she definitely has a presence.”

This is for every girl.

It is often noted that big, brawny, brooding Brooks Kopeka has a distinct physical presence. Ko is only 5’4″ and, in the words of Jane Park, “extremely polite and always smiling and very witty as well.” There is more than one way to rock the golf world. Koepka might have been the keynote player on the PGA Tour in 2019. But the unassuming Ko? Yeah. Player of the Year.