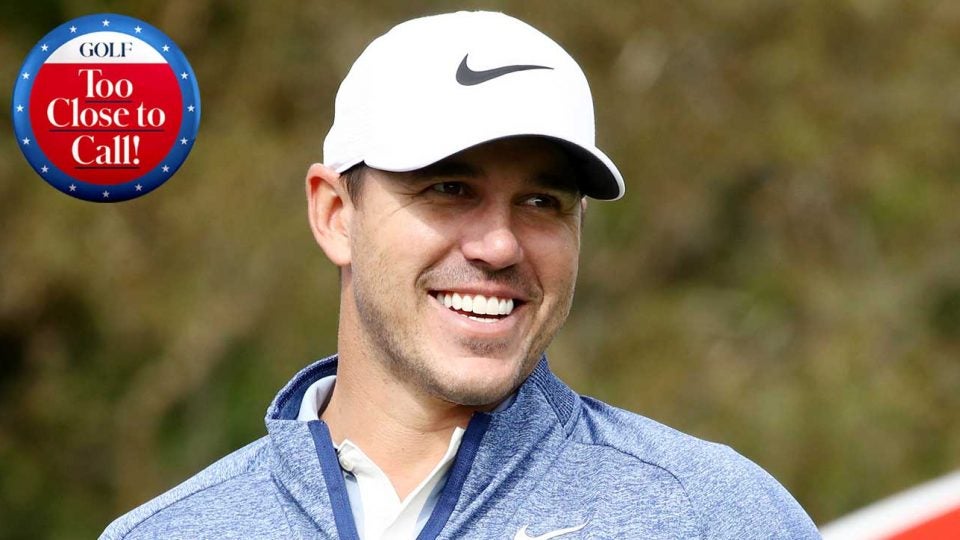 Brooks Koepka's 2019 season saw top-5 finishes in all four majors (including a win at the PGA), plus three Tour wins.
Getty Images

With last season’s PGA Tour campaign in the books (and the next already begun), finalists have emerged in the race for GOLF’s 2019 Player of the Year. Votes in the past have tipped in favor of one or two candidates. This year, there are four—all worthy and all with passionate supporters. And the POTY is …? Pick ’em. We’ll make our case for the four frontrunners and let you decide. Below, Sean Zak introduces the first candidate:

The case for Brooks Koepka

There may be Brooks Koepka fatigue at work for this award. The big man won two majors and was our runaway Player of the Year in 2018. So perhaps we’re not rushing to crown him POTY again in 2019?

I say Koepka is just as deserving of this year’s prize, maybe even more so. Put in the simplest terms, he was the greatest player in the biggest events of 2019 — and then some. Koepka kicked off the season with a casual four-stroke win in his first event (the CJ Cup @ Nine Bridges) — as one does. A few months later, he was one crazy Keith Mitchell putt from a playoff at the Honda and one tricky slider from joining Tiger in extra holes at Augusta.

All of that was a prelude to Bethpage Black, where Koepka’s dominance rightfully drew comparisons to Woods in his prime. He drained the hope from half the field with a first-round 63, besting Woods and Franceso Molinari, his major-winning playing partners, by nine strokes. Nine! Following that with a second-round 65 meant the PGA Championship — which he’d won in 2018 — was once again his tournament to lose.

When Koepka eventually raised the Wanamaker, he became the first player ever to hold back-to-back wins in majors simultaneously (two PGAs; two U.S. Open wins in ’17 and ’18). Turns out those Woods comparisons were spot on — not least for the way in which the golf world was growing tired of his winning. Save some majors for the rest of us!

If Woods showed grit in his historic win at Augusta, Koepka doubled that with his consistency. And what Rory McIlroy strutted out in Strokes Gained: Everything in 2019, Koepka topped with searing major memories (not to mention a drubbing of the field, and McIlroy, at St. Jude). When McIlroy could barely get off the first tee at Royal Portrush, Koepka posted his fourth top-four finish at a major in 2019, becoming just the fourth player to ever finish that high in every major in a single season, joining Woods, Jordan Spieth and Jack Nicklaus.

Koepka’s only real competition for Player of the Year is his female counterpart, Jin Young Ko. She is also the World No. 1. She won four times on the LPGA Tour in the 2019 season — and bagged two majors to BK’s one.

What did Koepka do that Ko didn’t? He led an all-out assault on one of the game’s biggest issues: slow play. Koepka’s wins, he asserted, gave him a louder voice with which to speak up, and he aggressively addressed the sluggish pace of his fellow pros. First, in January, at SiriusXM’s New York headquarters: “A lot of [the slower pros] are the very good players, too, which is part of the problem.” Then, in July, at Royal Portrush, he played the final round with notorious slowpoke J.B. Holmes. On the back nine, Koepka tapped his wrist in the direction of rules officials, in an attempt to say, “C’mon already!” A month later, at the Northern Trust, a confrontation between Brooks and Bryson DeChambeau led them both to call into a radio show and discuss the topic at length. Koepka may not be a reverential custodian of the traditions of the game, but he’s doing his best to nudge the sport into a faster future. Somewhere in the middle of all that, he represented golf at the ESPY Awards. No golfer made more headlines in 2019.

Brooks Koepka, in about a 160-word answer to one question:

- calls slow play on Tour "embarrassing"
- says "it's not that hard" to hit a golf ball
- "it really drives me nuts"
- "i just don’t get why you enforce some things and don’t enforce others"https://t.co/UwUJ14yYvO

When the PGA Tour Player of the Year votes were tallied, Koepka’s peers gave the nod to McIlroy’s season — or was it to McIlroy’s demeanor? Koepka has proudly and nonchalantly made this mind-numbingly difficult sport look easy. He even cockily reminded us of it in his press conferences. He didn’t practice between events this year, he said. Because his left knee was a nagging pain, he didn’t grind during normal Tour events when he didn’t have to.

It’s scary to think what might happen when he does. But we’ll save that for December 2020, when I’m here lobbying for him again. Koepka ended his 2019 season with a couple of comments intended to bite into the McIlroy for POTY campaign: “I’ve been out here for, what, five years?” he said. “Rory hasn’t won a major since I’ve been on the PGA Tour.” It was a perfect reminder of whose accomplishments we’ll actually remember from 2019.