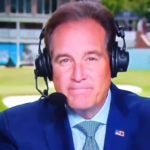 This week saw the playing of the first PGA Tour event — and first major American sporting event — since the pandemic shutdown began in early March. The past couple of weeks have also been dominated by protests over police brutality stemming from the death of George Floyd.

With these two things at the forefront of everyone’s mind, legendary CBS Sports broadcaster Jim Nantz chose to open CBS third round coverage with a powerful message of sports’ ability to bring people together.

In his first appearance in the broadcast booth at an official Tour event in months, Nantz mused on the importance of competition to the “American spirit,” and that the return of pro golf, and pro sports in general, has never been needed more “as we look for anything to help unify our splintered nation.”

Fairness, he continued, is also “fundamental to the American character. That all are created equal. But,” Nantz said, “for far too many of our fellow citizens, especially those in the Black community, this remains a promise that goes painfully unfulfilled. Today, their hurt runs deep.”

He then mentioned the daily moment of silence in honor of George Floyd that has been held each morning at the Charles Schwab Challenge at 8:46 a.m. ET, a time symbolizing the 8 minutes and 46 seconds that former Minneapolis police officer Derek Chauvin knelt on Floyd’s neck.

Finally, he closed out his message by quoting Nelson Mandela, and once again expressing his hope that golf’s return can help heal the country’s wounds.

“‘Sport,’ as Nelson Mandela once wrote, ‘has the power to unite people as little else does.’ We are proud to present golf’s return, and we hope in its own small way — and we get it, this is just a golf tournament — but in its own small way, it can be a part of a much larger, broader and vital effort to bring us together.”

You can watch a portion of Nantz’s statement that was shared on Twitter by Anthony Calhoun below.