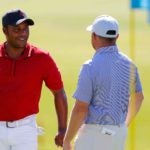 Ed. note: Michael Bamberger is on the ground for GOLF.com this week at the Charles Schwab Challenge, the first PGA Tour event in three months. Bamberger was so giddy to cover golf again that instead of waiting to get back to the press tent to file his report, he sent observations from the course in a series of text messages.

FORT WORTH, Texas — From your correspondent’s iPhone:

11:50 a.m. local time — Pat Perez, because he has a sense of humor, finished up his first round of this first tournament after this pause-for-Covid break, and put his thumb and forefingers to the tip of his black flat cap brim. He had made a superb up-and-down 4 on 18 for 69 and was responding to the fans ringing the green that existed only in his imagination. He then did an elaborate series of air fist bumps with his playing partners and their caddies and trudged up a paved path to scoring, where he signed his actual scorecard with an actual pen.

1:10 p.m — Three of the game’s biggest stars gathered on the 1st tee: Rory McIlroy, Brooks Koepka and Jon Rahm. All shaved for the occasion. (Not an everyday thing with those three!) Each had a driver in hand. (Not an every tee thing at Colonial!) There was a starter. His introductions were brief. “The 1:06 tee tee time. first off the tee, Rory McIlroy.” Silence. He ripped one. Silence. “Second, Brooks Koepka.” Silence before, silence after. “Third, Jon Rahm.”  Ditto. Off they went, for the first time since The Players.

1:40 p.m. — There are at least two spectators here, Jack and Joseph, teenagers on beach chairs behind the 2nd tee. And behind a chain-link fence that separates Colonial Parkway from the Colonial Country Club. They live a half-hour away by car. They drove to the Fort Worth Zoo, parked there, got their bikes off the roof, biked to the course, set themselves up. “None of the players have responded to our clapping or anything,” said Jack, a promising junior golfer. “But the grounds crew has been really nice. They brought us Gatorades.”

2:10 p.m. — The driving range here is almost a half-mile from the clubhouse, its tee running parallel to the 4th hole. (It’s a two-sided range and the players were using the east side farther from clubhouse, because it allowed them to hit into the wind, as they prefer.) It’s almost business as usual at it, except the players and their caddies are actually scooping their own balls out of giant gray round trash cans marked “Laundry.” Titleist, Callaway, TaylorMade, Bridgestone and Srixon. Each has two tubs. Yes, it’s a hardship, all that bending and scooping, but you could stand there all day, where the bleachers would normally be, and not hear a complaint. Bernhard Langer, the oldest player in the field at 62, was on the range practicing after his first-round 70, as is his custom. He remembers a day when players actually had to pay for range balls, and there were stripes on them. No stripers at Colonial.

3 p.m. — There were two MJophiles in deep chat throughout their round at Colonial: Harold Varner III, the only player on Tour with a shoes-to-hat deal with Michael Jordan’s clothing line, and Zac Blair, Tour player and course-architecture buff, who sells golf merchandise out of his garage, including, most recently, a limited-edition Last Dance-inspired putter hardcover.

3:50 p.m. — Fans make golf tournaments complicated, because they will do the darndest things at times with golf’s foul balls, and they ease things, by finding many errant shots. Tour rules officials expected to have lost-ball issues at Colonial, where the Bermuda rough is nearly three inches long but thin and dry, which creates conditions in which the ball drops straight down. Tony Finau, for instance, on the par-5 1st, hit his second shot hole-high and 10 yards left of the green and almost stepped on his nearly invisible ball before seeing it. In a normal week, a volunteer marshal or fans would have told him precisely where it was. But there are no fans here, and there are no marshals. But after nine hours of play, there had not been a single lost ball, and rules officials, scattered through the course, sat in their carts in the shade.

5 p.m. — Your sore-fingered correspondent took his lunch break shortly before 5. The folks here, from the Tour and Colonial, have been mightily accommodating in these unusual circumstances. There are only about a dozen reporters here and we’re in Texas and the lunch offerings have run red. This Tour correspondent doesn’t eat creatures with legs so today’s brown-bag special is smoked salmon, cheddar cheese and crackers, with Tour-issued iced tea.

5:03 p.m. — As I eat, I hear my colleagues left and right, earbuds in, interviewing Harold Varner III, via a teleconferencing app. Harold’s in the Colonial pro shop. We’re in the club’s indoor tennis center, 300 yards away. Harold shot 63. I can see that on the electronic scoreboard. He’s wearing a bright red shirt. I can see that on various laptops. He’s wearing tight white pants that Elvis would have loved. Those I saw on the golf course. He wears it all well. As one of the few black players on Tour, Harold was all over every media known to humankind, pre-tournament, talking about race and golf. I asked him what ordinary golfers could do, to make the game more hospitable to people who do not have access to the game. His advice was simple and profound: bring those people to golf. To a driving range, a tournament, a public course, a par-3 course. Make an introduction. Could there be a better winner this week than Harold?

5:40 p.m. — Just spoke to my colleague Jessica Marksbury, via Zoom, the Right Reverend John Sodaro presiding (producing). John was cross-state, in Houston. Jess, back from maternity leave, was in Arizona. I’m sitting on a ladder near a practice bunker at Colonial. That’s nothing, for spreadoutedness. CBS has a production company in New Zealand, helping with the weekend broadcast.

6 p.m. — The are no standard bearers, kids hoisting red and black scores in the wind. They say it’s hard to tell the players without a scorecard, but that’s not the whole truth. If you see somebody wearing a mask, here inside the confines, chances are good that person works for CBS, because the network has a strict edict about the matter. Meals in your room. No social anything. Wear your mask. There was a player on 18 that I thought was Sergio from a distance. The player left a 15-footer one foot short, got over his ball and looked for a moment line he was going to whack it into the greenside lake. It was Sergio. The leaderboard beside the 18th green has no pride-of-homeland names beside its names, but I counted five nationalities’ flags. How cool is that? The border walks are low now, in every way. We’ve all seen that. It’s good to be back. Until tomorrow, in the phrase of the moment, stay safe.