Jim Herman is a pro, and he knows how to get by on the ‘other’ PGA Tour 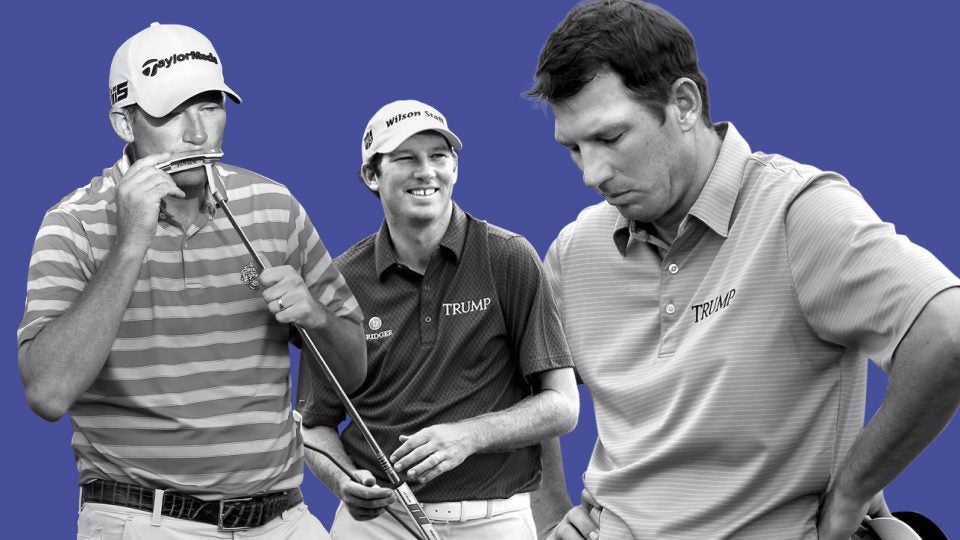 Come January, Jim Herman, a fly-commercial journeyman touring pro, will be at Kapalua, the curtain-raiser for the 2020 golf year. He has his entry ticket, a Tour victory in 2019. So, of course, does Tiger Woods, Phil Mickelson, Rory McIlroy, Brooks Koepka and various others with pilots on speed dial. Professional golf has always been a tale of two tours.

On this steamy Monday morning in summer, Kapalua is a million miles away. Jim and his wife, Carolyn, have flown all night from the Tour stop in Reno, heading to Philadelphia International after changing planes at O’Hare. Carolyn grew up in the far-off Philadelphia suburbs, and her father is a text message away, in a shiny red Ford Expedition. Outside United baggage claim, a smoker still in her airplane fleece is shaking out her first postflight cig. And now the Hermans are coming down the escalator, looking good, all things considered. Jim’s wearing a sweater vest, with a Seminole logo. A skycap with golf jokes and a tired metal cart waits for the carousel to spring to life.

Back in the day, when the players were all named Bob (Goalby, Murphy, Gilder), guys used to say, “He’s going so bad, he’s taking swing tips from Delta skycaps.” It was always Delta, as the Tour was more Southern than anything else, and Delta rules Atlanta. Jim is 41 and too young to know that skycap bit, but he can relate. This year, he had two streaks in which he missed five straight cuts. Kyle Stanley, empathy in his voice, asked Jim at the John Deere (MC) if he was thinking about life beyond the Tour. Yes, actually.

He won the following week, at the Barbasol Championship, a Tour event played opposite the British Open. It was Jim’s second Tour win and it earned him $630,000. A couple weeks earlier, Jim had received a tip from his old boss, Donald Trump, who told him, after a round at Trump Bedminster, to ditch his claw putting grip (ugly!) and go back to a conventional one. Jim made a year’s worth of putts at Barbasol, shot 26 under and won by a shot.
Amazing, yes, but golf’s a funny game. In 2016, James Hahn missed eight straight cuts before winning the Wells Fargo Championship. In his first 20 events in 1995, Peter Teravainen, an econ major at Yale prior to taking his talents to the European Tour, made only five cuts before winning the Czech Open and about $200,000. In victory he said, “Now I’m up to broke.” Peter did Europe on Ryanair and caddie buses, and most years he made more money than he spent. Always the first goal for the Peters and the Bobs and the Jims.

This Jim has played dozens of rounds with Donald Trump but has never flown with him. He’s flown on private planes twice in his life, once hitching a ride with Ernie Els and once splitting a Wheels Up jet with J.B. Holmes.

“I wrote him a $4,000 check for my share and thought, I could have used this money better,” Jim said at PHL.

The United carousel was now spinning beside the Hermans. Their bags came through the chute, and husband and wife hoisted them onto a Smarte Carte, which is fine for rectangular suitcases but clumsy for golf travel bags, and Jim’s is round and soft-sided and stuffed to the gills. He wheeled his kit out.

He was done for the year. Even with the win, Jim didn’t qualify for the FedEx playoffs. The players never use the phrase money list anymore. Their barometer is their FedEx ranking. But money’s still money. Over the 2018-19 wraparound season, Jim Herman played in 21 events and earned $678,185; 142 players finished ahead of him. It’s unlikely that all of them made more money than they spent. But Jim did.

Tiger and Brooks and some of the other Kapalua qualifiers have things that Jim does not: long-iron cut shots to back-right pins, private jets simmering on nearby airstrips. But we learn to make do, right? Per Jim: “I can sleep on any plane.” Plus, his hotel room in Reno was a freebie, in exchange for playing in an off-site Tuesday pro-am, and his in-laws had the kids for the week. A good experience and the price was right, too. Carolyn hit send, her father brought the Expedition around and the Hermans were off without a hint of fuss. Two pros.