Jazz Janewattananond has no regrets about his first PGA Championship, except maybe the pizza

FARMINGDALE, N.Y. — On Sunday evening, Jazz Janewattananond, a Bethpage first-timer by way of Bangkok, was milling with his entourage near the entrance to the red-brick clubhouse at this sprawling state-run golf facility. The 23-year-old had just signed for a seven-over-par 77 on a breezy day on the lethal Black Course that bounced him from a tie for second after 54 holes to a forgettable T-14, a distant 10 strokes behind the victor, Brooks Koepka of Jupiter, Fla.

Regrets? Just one, Jazz said, and it wasn’t bogeying six of his last seven holes to fade from contention. The kid was bummed he hadn’t yet tried New York pizza.

“We’ll get pizza tonight!” cried one of his comrades.

Jazz grinned as if he’d just won the Wanamaker.

Jazz made a name for himself on Long Island this week, and not just because his actual name barely fit on the leaderboards. (It’s pronounced just as it looks, by the way: Jane-what-a-NAN-ond.) With a steady diet of hammered tee shots and clutch putting, the three-time Asian Tour winner who also moonlights on the European Tour coolly hung up rounds of 70-68-67 before his Sunday swoon. That, to steal an unfortunate bit of golf-commentator parlance, is seriously golfing your ball. On this course? In these conditions? From a guy who has played on only one other course stateside (Colonial Country Club, two years ago)? Fuggedaboutit. 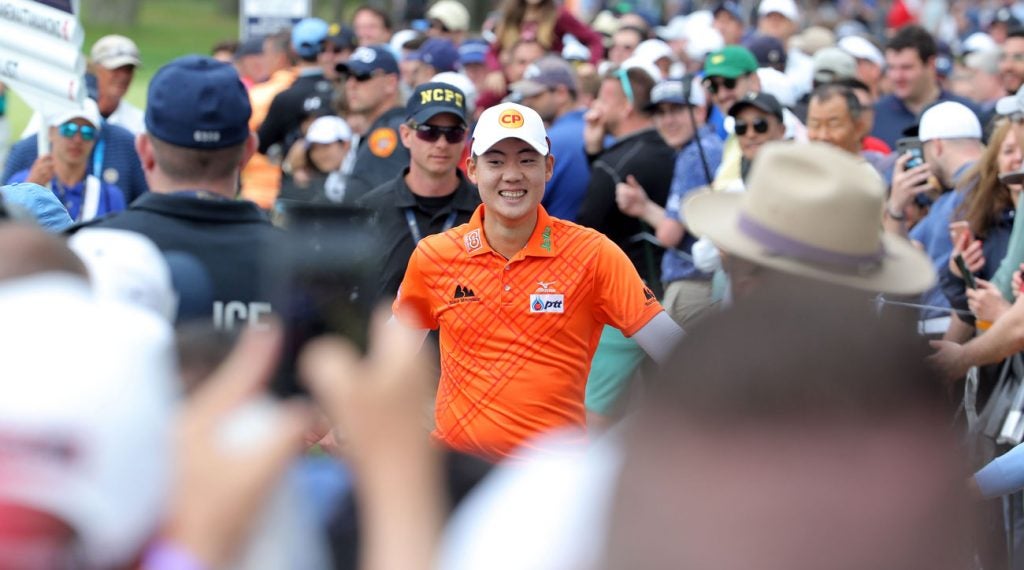 Jazz’s first welcome-to-the-bigs moment came on Monday, when he trudged through the rain and slop at Bethpage to play a practice round. How I am going to play this course, he thought. I’m not going to break 80. But the real stunner was he wasn’t alone. “There were people everywhere,” he said. “I’m like, ‘What’s going on?’ On the European tour and Asian tour, in practice rounds no one gives a crap, no one’s there. Here there’s thousands and thousands of people. Hit a good shot, they clap, hit a bad shot, they boo. I was like, ‘Ohhhh-kay.'”

Jazz has had other big moments. At 14, he became the youngest player to make a cut on the Asian Tour; last summer he played in his first major, the British Open; and his fine play worldwide has propelled him to 69th in the world rankings, which is how he qualified for the PGA Championship. In 2016, he took a two-week sabbatical from golf to join the monkhood, at a temple in northern Thailand. “Before that, golf was everything to me, and it gave me so much pressure during competition,” he said after his retreat. “I have been competing with less pressure ever since and starting getting better results.”

Jazz Janewattananond (pictured right) took time out of professional golf in 2016 to spend time as a monk. #PGAChamp pic.twitter.com/T7Bhg29paT

That was the story of his week at Bethpage — well, at least until Sunday pressure on a fire-breathing setup finally overcame him. “What happened today is good to have it happen right now, because I’m only 23 playing my second major,” Jazz said. “If I finished too good, I could be lazy, I could be thinking I was a big shot. That humbled me. Now I know I need to work a lot harder.”

News
Brooks Koepka on fans cheering for Dustin Johnson: ‘I think it helped me’

Jazz wasn’t the only Thai player to make the cut this week. So, too, did his uber-popular countryman Kiradech Aphibarnrat. The fun-loving, soft-around-the-edges Aphibarnrat is only six years older than Jazz but has logged seven wins internationally and played in 16 majors. He took Jazz under his wing this week, playing multiple practice rounds with him. What advice did Aphibarnrat impart?

“It was a lot things,” Jazz said after some prodding. “Eat a lot, play a lot of money games, and don’t take golf too seriously.”