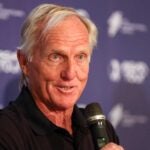 Greg Norman speaks with the press during the Saudi International earlier this month.

In a firmly-worded letter sent to PGA Tour commissioner Jay Monahan Thursday morning, Greg Norman continued to spell out why he contends the Tour cannot ban players for playing golf in a different league.

“Surely you jest,” Norman began the letter. “And surely, your lawyers at the PGA Tour must be holding their breath.”

The theoretical tug-of-war for the best male golfers on the planet has reached a new level in the past few weeks, with numerous players outwardly decrying both the PGA Tour and the Saudi-backed tour that Norman’s LIV Golf Investments is expected to launch. There was Charley Hoffman’s Instagram rant loosely connecting the Rules of Golf to players considering breakaway tours. There was the many top players who spoke at last week’s Genesis Invitational about the merits of the PGA Tour and why breaking away implies great risk.

Then there was Phil Mickelson’s viral comments from November that were published a week ago, for which he then apologized and lost sponsorships over. Last Friday, Norman sent a 25-point memo to players and agents clarifying that the Tour cannot ban players. Thursday’s letter to Monahan is just the most formal, public-facing version of arguments being made behind-the-scenes by the breakaway tour.

“For decades, I have fought for the rights of players to enjoy a career in which they are rewarded fully and properly for their efforts,” Norman wrote. “They are one-in-a-million athletes. Yet for decades, the Tour has put its own financial ambitions ahead of the players, and every player on the tour knows it. The Tour is the Players Tour not your administration’s Tour. Why do you call the crown jewel in all tournaments outside the Majors ‘The Players Championship’ and not ‘The Administration’s Championship?’”

Norman noted that, despite the recent comments of many top pros backing the PGA Tour, he believes many players “were and still are interested in playing for a new league, in addition to the PGA TOUR.” That is an important sticking point between the two leagues. Norman’s would-be league — with its slimmed-down schedule, alternate formats, team golf and billions in reported funding — has made clear it wants to coexist alongside the PGA Tour. Monahan doesn’t want that at all.

The commissioner is now in his third year of telling Tour players that playing in any breakaway league that rivals the PGA Tour is grounds for a serious, perhaps lifetime ban. Speaking with the Player Advisory Council last week at the Genesis and in a mandatory players meeting this week at The Honda Classic, Monahan maintained that stance. Then, on Wednesday, Monahan told The Associated Press, “I told players we’re moving on and anyone on the fence needs to make a decision.”

It leaves the PGA Tour with a very public hardline for its members to follow, but doesn’t necessarily imply that Norman’s team will stop and listen. Norman has long tried to alter the shape of the PGA Tour, first back in 1994 with his vision for a World Golf Tour. Some of his ideas at the time were eventually co-opted by the Tour and turned into what are now known as the World Golf Championships. But this current arrangement seems to have more backing than ever before, particularly, he believes, in the proverbial courtroom.

Norman cited a recent article written by Alden Abbott, former general council for the Federal Trade Commission, as evidence of where this story could turn. As the article states, and Norman’s letter notes, “imposing a lifetime ban on players would trigger a slam-dunk antitrust lawsuit by Norman’s upstart league, the players, or even federal antitrust enforcers who have made it a priority to protect workers’ ability to ply their trade for whomever they please without interference from corporate giants.”

The discussion of a rival tour hung over last week’s Genesis Invitational, and has now clearly made its way across the country to the Honda Classic. Brooks Koepka has publicly stated his support and allegiance to the PGA Tour, but during his press conference Tuesday said he doesn’t Norman to retreat. “I think it’s going to still keep going,” Koepka said. “I think there will still be talk. I think — everyone talks about money. They’ve got enough of it. I don’t see it backing down; they can just double up and they’ll figure it out. They’ll get their guys. Somebody will sell out and go to it.”

Later Tuesday, Rickie Fowler was asked where he stands, and through veiled wording he pointed out that there is obvious room for growth by the PGA Tour. “I’ve always looked at having competition as a good thing,” Fowler said. “For me that’s always how I got better through say junior golf, through college golf and even out here playing against the best players in the world.

“Ultimately I think that if everything kind of goes the right way, I think everyone comes out in a better place. Like I said, I think competition is a good thing, and in business, whatever it may be, you’re trying to always — if you’re trying to be the best, you want to find ways that you can be better than your competitors. It goes through sport, business, tours, whatever it may be. I just hope that everything kind of continues to either head the right way or not the wrong way, and we can all end up in a better place in the future.”

What did he mean, exactly by the right way?

“Do I think the PGA Tour is the best place to play currently?” he said. “Yes. Do I think it could get better? Yes.”

Xander Schauffele, who has remained rather silent on the topic, posted his stance on Twitter Wednesday evening, saying that his team entertained conversations with the LIV Golf team and “came to the conclusion that the SGL isn’t close to a finished product or business model.”

Whether or not Schauffele’s perception of the Saudi-backed league remains true, Norman is as forthright as possible at the moment. He ended the letter in a similar tone to how it began: “Commissioner — this is just the beginning. It certainly is not the end.”