‘I’ve had enough of this crap’: How pro shot course record because of anger 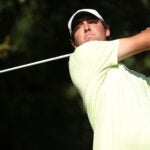 Scottie Scheffler hits his tee shot on Friday on the 14th hole at Memorial Park.

Scottie Scheffler, when asked Friday if he has any course records, said he has “a few.” His home course, he said. And a course in Dallas. “And I have the course at Northern Trust; I can’t remember the name,” he said.

“Yeah, whatever it was,” Scheffler said. “I assume no one beat 59 there, I hope, but you never know.”

At this point, it was clear he was referring to the 59 he shot last year at TPC Boston during the second round of the Northern Trust. A reporter double-checked with him.

“TPC Boston, whatever that one is,” Scheffler said. “If someone beat it, that stinks, but I feel like I have that one as well.”

Scottie Scheffler is as easy going as there is in golf, and if you needed any reminder of that, re-read the exchange above. Course record? Yeah, I have a few. TPC Boston? Whatever that one is. But then you start your first round at the Houston Open three-over through five holes, and then you finish at two-over, and then you bogey the fourth hole of your second round after standing in the fairway, and sometimes even the even-tempered get a little hot.

“After I bogeyed No. 4, I basically told myself I’ve had enough of this crap,” he said. “That’s what I told my caddie, too, walking down 5 fairway.”

“I think I just got really mad,” Scheffler also told Golf Channel. “Started focusing a little bit harder, and then I just started hitting good shots. I still didn’t feel super comfortable over the ball, but I hit a lot more fairways than I did yesterday and I was able to hit some iron shots and make a few putts.”

Of course, they tell you to keep a level head, and yada, yada, yada. And it’s not like Scheffler is going to start snapping clubs anytime soon. But every once in a while, even the easy-going tell themselves what Schefffler told himself.

“I mean, I think anger can go a few ways on the golf course, he said. “You can use it and get even more frustrated and more pissed off and you start thinking negatively.

“I used that anger today as a positive.”