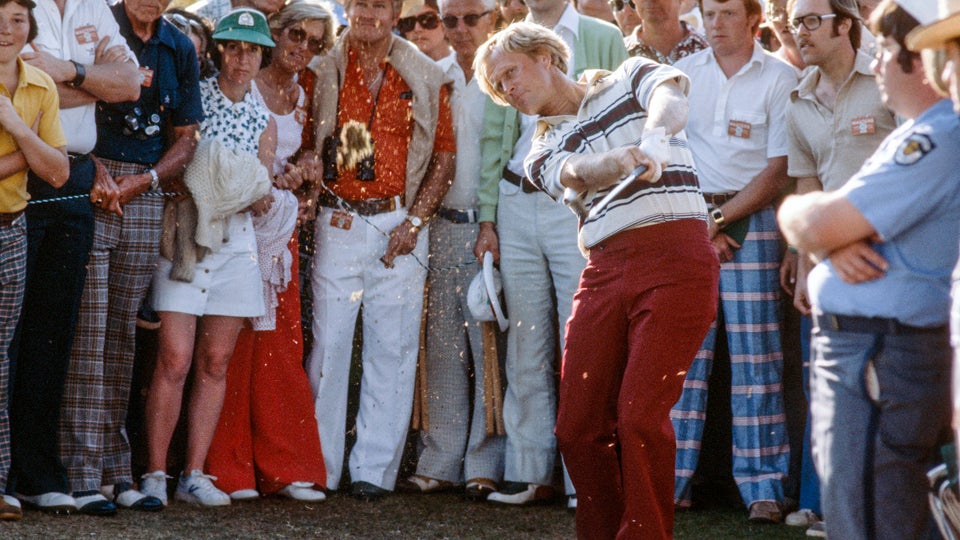 Jack Nicklaus congratulates Tom Watson after Watson wins their famous 'Duel in the Sun' at the 1977 British Open at Turnberry.
Stephen Green-Armytage/Sports Illustrated

With his 18 major championships, Jack Nicklaus owns one of the most recognizable records in sports. Many believe it will never be broken. But ponder this: With a holed putt or a favorable bounce here or there, the Golden Bear could have put the number out of reach.

The list of records that resides next to Jack Nicklaus’s name is long. Most notable are his 18 major championships and his half-dozen Masters titles. Only Tiger Woods (14) and Walter Hagen (11) have even half as many of the sport’s coveted crowns as Nicklaus.

Just as staggering: Jack was a runner-up in a major 19 times and finished in the top three 46 times in 164 starts. In the British Open alone, he has seven second-place showings. Even Nicklaus is left to wonder what might have been.

“I went through a period from 1967 to 1970 where I was winning six or seven tournaments a year, but I wasn’t winning the majors,” he said in 2006. “It really wasn’t a big deal to me until my father passed [in February 1970]. Then I realized I was not really working that hard at what I was doing. I passed a lot of good years there. If I knew that Tiger was coming along, I would have focused a lot earlier in my life. If Bobby Jones had won 20 majors, I would have focused a lot earlier on 20.”

That got me thinking. How many majors should Jack have won? I’ve concluded that he easily could have set the bar at 28. Ridiculous, you say? Here’s my list of the 10 majors that got away.

The game’s past, present and future—Ben, Arnold and Jack—came together. A 20-year-old amateur, Nicklaus was awful on the greens, prompting Hogan to remark, “I played with a kid who should have won this thing by 10 shots.” Hogan tied for ninth, while Palmer cemented his legacy with a famous final-round charge, sparked by his driving the green on the 346-yard, par-4 1st hole.

Nicklaus came to the last hole thinking he had a one-shot lead, but he was actually tied. He made bogey from a fairway bunker and missed the 36-hole playoff, which Charles won. “Lytham was the only one I really gave away,” Nicklaus said years later. “It was a learning experience.”

Coody chased down Miller with birdies at the 15th and 16th holes, while Nicklaus couldn’t get anything going. Coody played the back-nine par-5s in one under on Sunday, while Nicklaus made two pars, even though he was hitting 4-iron into the greens while Coody was using woods. Jack did himself no favors with four Sunday three-putts.

Nicklaus missed a 15-foot birdie putt at the 72nd hole, and Trevino won the 18-hole playoff 68–71. He got some help from Jack, who left a ball in the bunker at the 2nd (bogey) and the 3rd (double), and chunked a wedge from the 10th fairway. Nicklaus was the runner-up in four of Trevino’s six major victories.

Nicklaus has called this his most disappointing loss, undoubtedly because he was playing the best golf of his career. The Grand Slam was in his sights—he’d already won the Masters and the U.S. Open. He trailed Trevino by six shots going into the final round but pulled into a tie by playing the first 15 holes in six under. Nicklaus missed a five-foot par putt at the 16th, and Trevino held on after chipping in for a crazy par at the 17th hole.

In search of his first major, Watson took a three-shot lead into Sunday. The two were tied as the fast-closing Nicklaus stood in the 18th fairway, but then Watson rolled in a 20-foot birdie putt at the 17th. The ensuing roar forced Nicklaus to back off his shot, and he would seal his fate with a last-hole bogey.

It became known as the Duel in the Sun, and it turned into quite the weekend as Nicklaus and Watson, playing in unusually dry conditions, left the field in the dust. Nicklaus was two up with six holes to play, but Watson answered with a birdie, then pulled even at the 15th when he holed a 60-foot pin-rattling birdie putt from the fringe. The par-5 17th was the decider. Watson two-putted for birdie, while Nicklaus missed a three-footer. They closed with dramatic birdies, then walked off the 18th green arm in arm.

Littler, 47, led Nicklaus by four and Wadkins by six heading into the final round, but he caught a ride on the bogey train on the back nine. When Nicklaus birdied the 15th hole, he and Littler were tied, with Wadkins one back. At the par-3 17th, site of his famous 1-iron off the flagstick at the ’72 U.S. Open, Nicklaus made a bogey. Wadkins birdied the 18th to catch Littler, then won the first sudden-death playoff in major championship history with a par on the third hole. 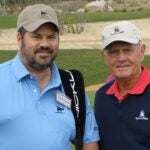 You may also like Scorecard Stories: Travelin’ Joe Caddies for Jack Nicklaus

Tied with Watson as he walked off the 18th green, Nicklaus had to feel good about his chances. Watson had just short-sided himself at the 17th. But then he holed the chip shot and capped his victory with another birdie. What’s often forgotten is that Nicklaus missed an eight-foot birdie putt at 14, while Watson holed a 40-footer. And Jack three-putted the 11th for a costly bogey.

Sutton took a two-shot lead over Ben Crenshaw into the final round, but it was Nicklaus who went on a Sunday tear. He birdied the first six holes on the back nine, only to close with three consecutive bogeys. It would be the last of Jack’s 19 runner-up finishes in a major.