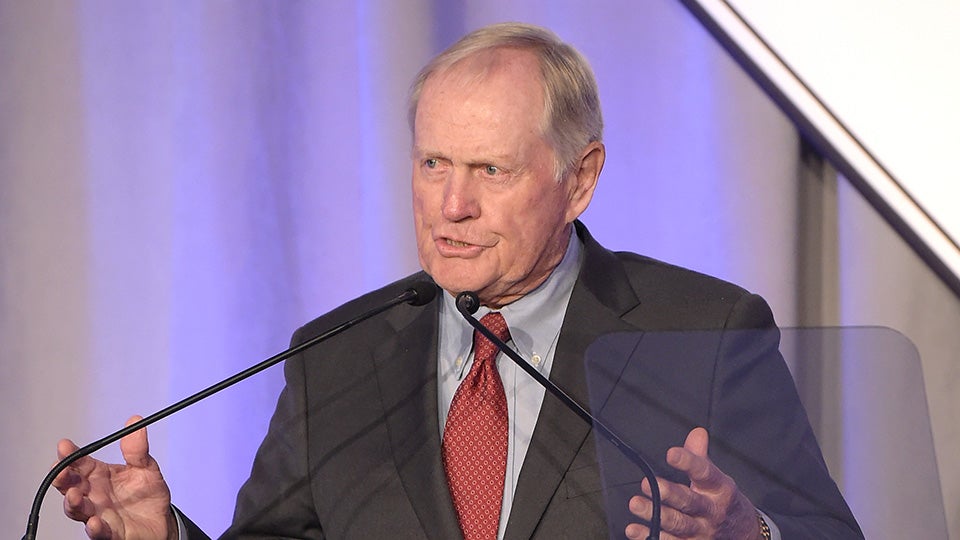 Flanked by Muhammad Ali’s wife Lonnie and actor Will Smith, Jack Nicklaus accepted the Ali Legacy Award at the annual Sports Illustrated‘s Sportsperson of the Year dinner in New York on Tuesday.

The Golden Bear, who in November was named the third recipient of the award recognizing sportsmanship, leadership and philanthropy, was chosen not only for his several decades of success on the golf course, but for his charitable work with his Nicklaus Children’s Health Care Foundation.

The award was previously given to Special Olympics founder Eunice Kennedy Shriver in 2008, and NBA legend and philanthropist Magic Johnson in 2014. It was renamed after Ali earlier this year.

“Tonight I’d like to accept this award on behalf of those important pillars of my past and present that continue to shape me as a person, and has inspired me to do what I can do with what God gave me, and encourage me to leave God’s earth a little better than when I found it,” Nicklaus said in his acceptance speech.

“My walls at home are not reserved for plaques or trophies, but for photos of my kids and grandkids,” Nicklaus said. “But I must confess there is one special photo in my office, and that is of Muhammad Ali and me playfully sparring at the PGA Championship — and I promise you it was playful — in 1996 in his hometown of Louisville. It’s one of my favorite pictures.”

He finished the story by miming a poised Ali versus a cowering Nicklaus, which was met by laughter and applause from the audience.

In addition to receiving the award, Nicklaus partook in a panel with SI’s Sportsperson of the Year honoree, Serena Williams. He spoke highly of the tennis phenom, commending her competitive spirit and refusal to give up.

The 75-year-old Nicklaus boasts 18 major titles and 73 PGA Tour wins. He was awarded the Presidential Medal of Freedom in 2005 and the Congressional Gold Medal earlier this year. He has more than a hundred worldwide wins and is a five-time winner of the PGA Tour Player of the Year award. Off the course, Nicklaus has designed almost 300 golf courses and provides pediatric services across the United States through his foundation.