Inherit the Win: Jack Nicklaus might be defined by golf, but he’ll be remembered for his character

Jack Nicklaus is more than a golfer, he’s an idea. It’s one thing to be the greatest champion the game has ever known, but to also be the quintessence of class, dignity and sportsmanship? Well, Jack represents something bigger than himself. In honor of The Golden Bear turning 80 on Tuesday (Jan. 21), GOLF.com is spending Nicklaus’ birthday week — with a little help from his friends — honoring the man himself. You can find even more Jack at 80 coverage in GOLF’s February issue.

Over the years, various people have been called the Next Nicklaus, with varying results. By birthright, Jack Nicklaus II was the Next Nicklaus. But Jackie grew up to be tall, slender and easy-going, and much more like his mother, Barbara, than his father, Big Jack himself. Ben Crenshaw was a Next Nicklaus, at least for a while. Eddie Pearce, Hal Sutton, Bobby Clampett and John Daly all carried the mantle at various times.

And then there are two special-case Next Nicklauses, Gary Nicklaus and Johnny Miller. Johnny, now 72, retired last year after 29 years as a broadcaster for NBC Sports. In the mid-1970s there was a stretch when nobody played better golf than Johnny, except for Nicklaus, and Johnny looked like he could be the next Nicklaus. Gary, now 51 and an entrepreneur and a sometimes competitor on the Senior Tour, was on the cover of  Sports Illustrated in 1985 as a promising 16-year-old golfer, accompanied by a three-word headline: “The Next Nicklaus.”

It seems almost unnecessary to say that neither became the Next Nicklaus. Sixty years after Jack’s first U.S. Amateur win, we know there will never be a Next Nicklaus. Nicklaus, who turned 80 on January 21, is one of a kind. But Gary and Johnny are in a special category because they figured out the best thing you can do, if people started calling you the Next Nicklaus. And it’s something any of us can do. They followed Jack’s example.

Johnny knows the exact day he entered the Jack Nicklaus mentorship program. It was on the Tuesday before the 1966 U.S. Open at the Olympic Club, in San Francisco. Two months earlier, Nicklaus had won this third Masters title. He was 26 but old for his age. He and Barbara, already married for a half-decade, had three children. Jack was heavy-set, he wore pork-pie hats over his oiled-back hair and did most everything, except make a downswing, at a languid pace. Johnny was a 19-year-old amateur hotshot with a body you could fit in a driver shaft, and he was a junior member at Olympic. John — what Nicklaus calls him to this day — and Nicklaus played a practice round together on that Tuesday.

“He treated that practice round like it was the fourth round,” Johnny said recently. Johnny and his wife of 50 years, Linda, recently moved to Pacific Grove, Calif., just a few miles from Pebble Beach. “And every round I’ve ever played with him since then was the same way. Same methodical pre-shot routine. Same level of focus. And over time I realized that if you treat a practice round like a competition round, then you can just keep doing your thing.” 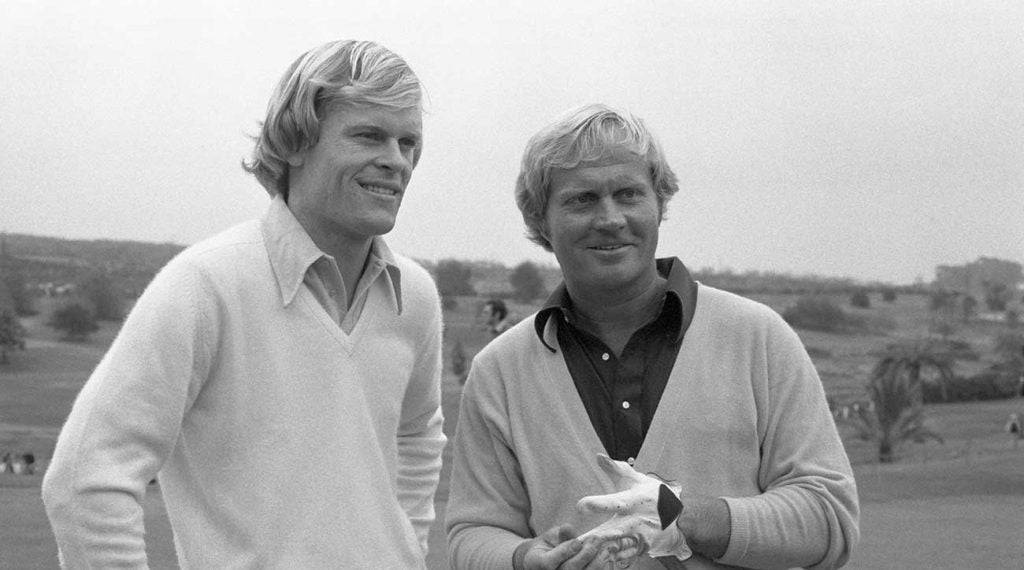 He was preordained with the title of "the Next Nicklaus," but Johnny Miller found himself on different footing with Jack—as his mentee.
Getty Images

It’s amazing how vividly Johnny remembers many of his interactions with Nicklaus.

“He must have thought I was okay, because at the end of the day he said, ‘Let’s go play San Francisco Golf Club tomorrow.’ He was ready for the Open. He wasn’t going to cram for the test.” And eventually Johnny saw the wisdom in that, too: Do it, but don’t overdo it.

Here are four things under the heading “John Watching Jack”:

1. Johnny saw that Jack had such a deep level of preparation, particularly at the majors, “that he could say to himself, ‘Who deserves to win this more than I do?’” To the degree he could, Johnny tried to do the same.

3. Johnny saw that Jack never tried to extract every last dollar from his business deals, always emphasizing the importance of long-term relationships, and Johnny has learned from that example.

4. Johnny saw that Jack resisted change, in his golf swing and his equipment and in various other things, unless he was absolutely convinced it was going to improve him, and Johnny saw the wisdom in that.

News
Gary Player: Belief in himself is what made Jack Nicklaus special

He saw the wisdom in staying close, even though Johnny lived in northern California and Jack lived in south Florida, in a community he helped settle, called Lost Tree Village. When Jack invited Johnny somewhere — on fishing trips, to look at courses he was designing, to play in various team competitions — Johnny was quick to say yes. He knew he’d learn something, and he knew he’d have a good time.

This comment is a half-century in the making. There are two things that Johnny says all people could take from Jack Nicklaus and apply to their own lives: Jack’s abiding sense of honesty and sense of fun.

“I remember at the 1975 Masters, at the awards ceremony,” Johnny says. Nicklaus had just defeated Johnny and Tom Weiskopf by a shot. “He says, ‘Thanks for making this so much fun for me.’ Easy for him to say!” Some years later, Jack paid Johnny one of the most meaningful compliments anybody ever has. As Jack’s sons were getting serious about golf, he said, “I want my boys to swing like Johnny Miller.”

"I remember at the 1975 Masters, at the awards ceremony," Miller says. Nicklaus had just defeated him by a shot. "He says, 'Thanks for making this so much fun for me.' Easy for him to say!"

On that SI cover, Gary looks like Johnny Miller, but golf never brought Gary Nicklaus the kind of pleasure it brought his father. But he followed his father into hunting and fishing, and being in the field and on the water did. Today Gary is one of seven members of the Florida Fish and Wildlife Conservation Commission. As a hunter, the first thing father taught son was gun safety. They went out to a nearby woods and took aim at a pine tree with a 410 shotgun. They then walked over to the tree and Jack had Gary rub his finger over the gaping hole where bark and wood had once been.

“Do you feel that?” the father asked.

“Now, if a 410 shotgun can do that to a tree, imagine what it can do to a stomach,” the father said.

Jack didn’t need a parenting book to figure out how visual learning works, and the value of learning by doing. Gary does the same thing with his son, GT, and daughter, Nina. GT is a golfer, so father and son have a natural meeting point. But Nina is not, just as Gary’s sister, Nan, was not. When Nan was growing up, Jack made an extra effort to have one-on-one time with his only daughter. Gary follows that example with Nina. 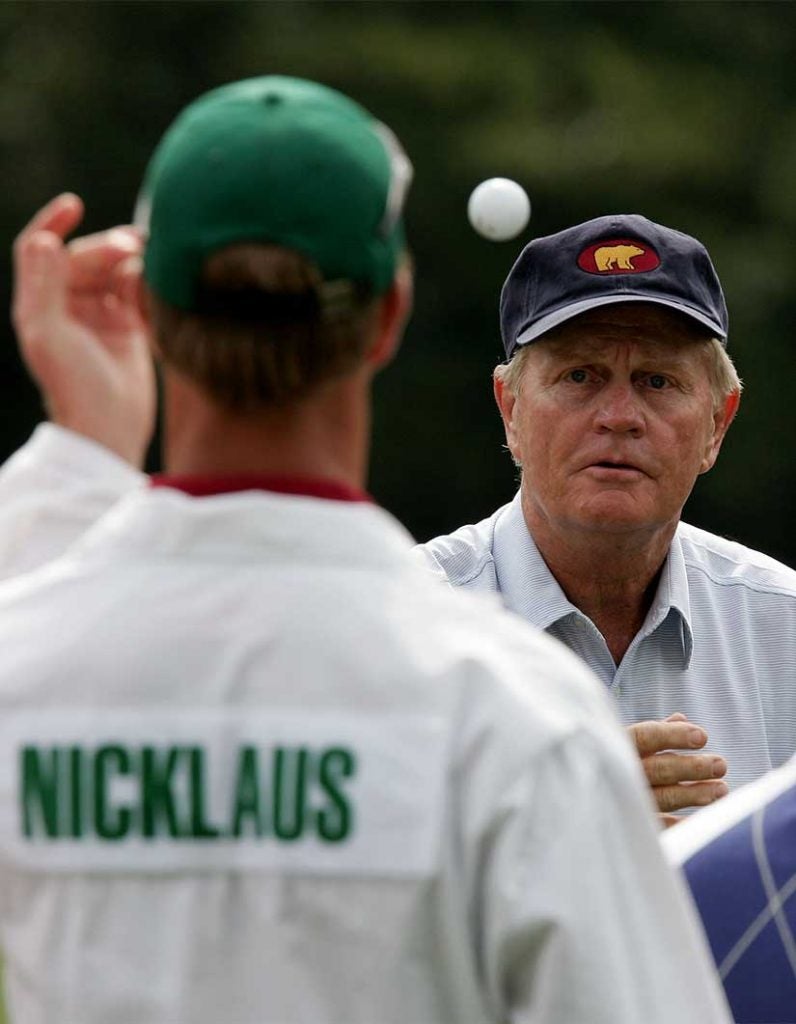 Golf wasn't all that came naturally to Jack. He mentored those around him with effortless ease.
Getty Images

Then there was the long period, starting in 2003, when Gary didn’t play golf at all. His father’s life was defined by golf, and if he was disappointed, he didn’t let on. Then, after nearly four years of not playing, Gary told his father he was going to start playing again, but as an amateur, and Jack was glad to hear it. Gary said he learned from his father that “Life’s too short to be doing something you don’t want to be doing.” Jack, as a father, figured out that dictating a path has no chance for success, but setting an example does.

Jack shouldn’t sound too saintly here. If he gives you a hard time, he’s expressing his love! Back when Gary Nicklaus was the Next Nicklaus, he went off for a day of fishing with his buddies. Father said to son, “Keep this up and you’ll become the best fisherman in Lost Tree Village.”

Well, Gary did, and his father understood. 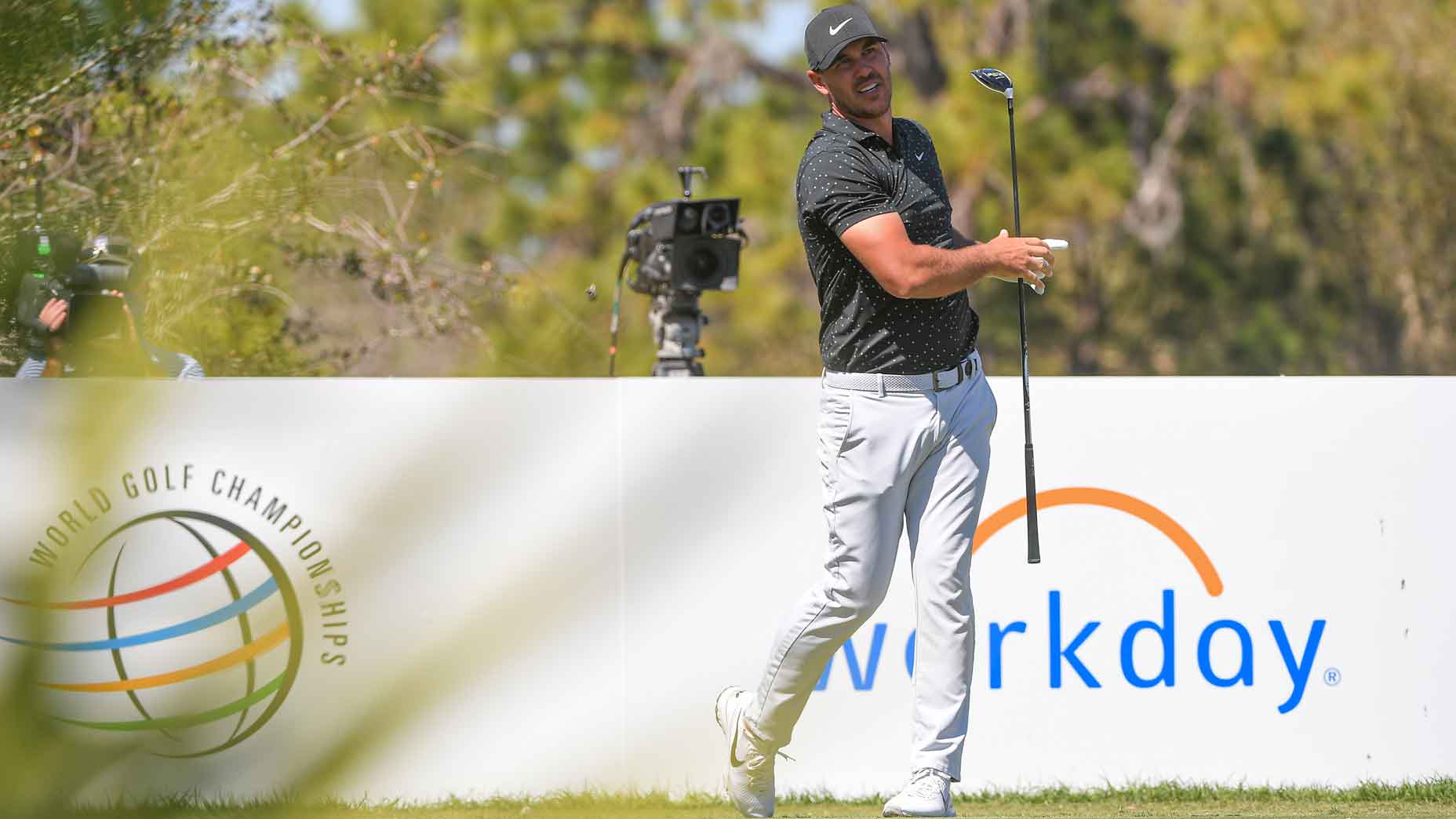 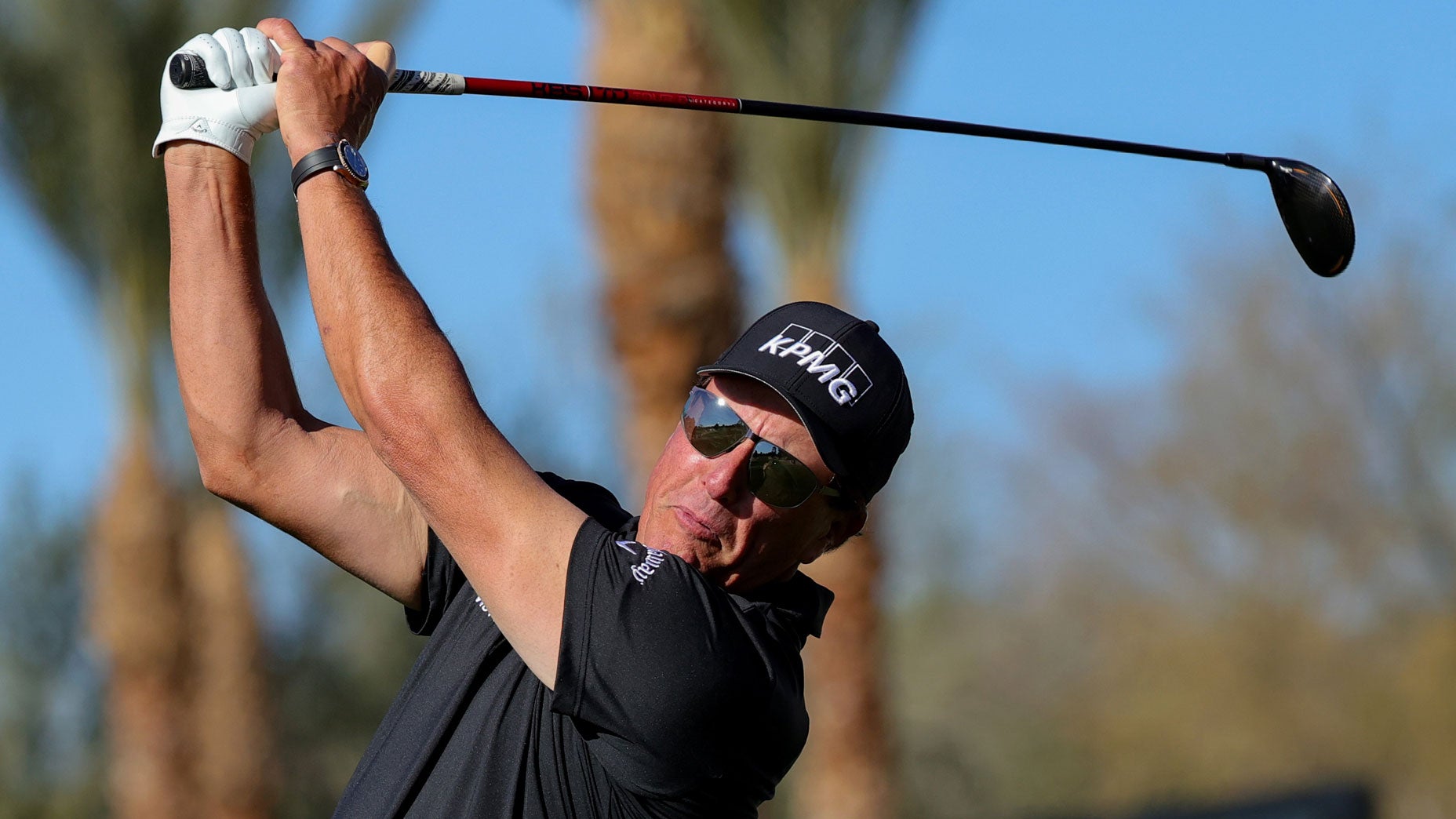 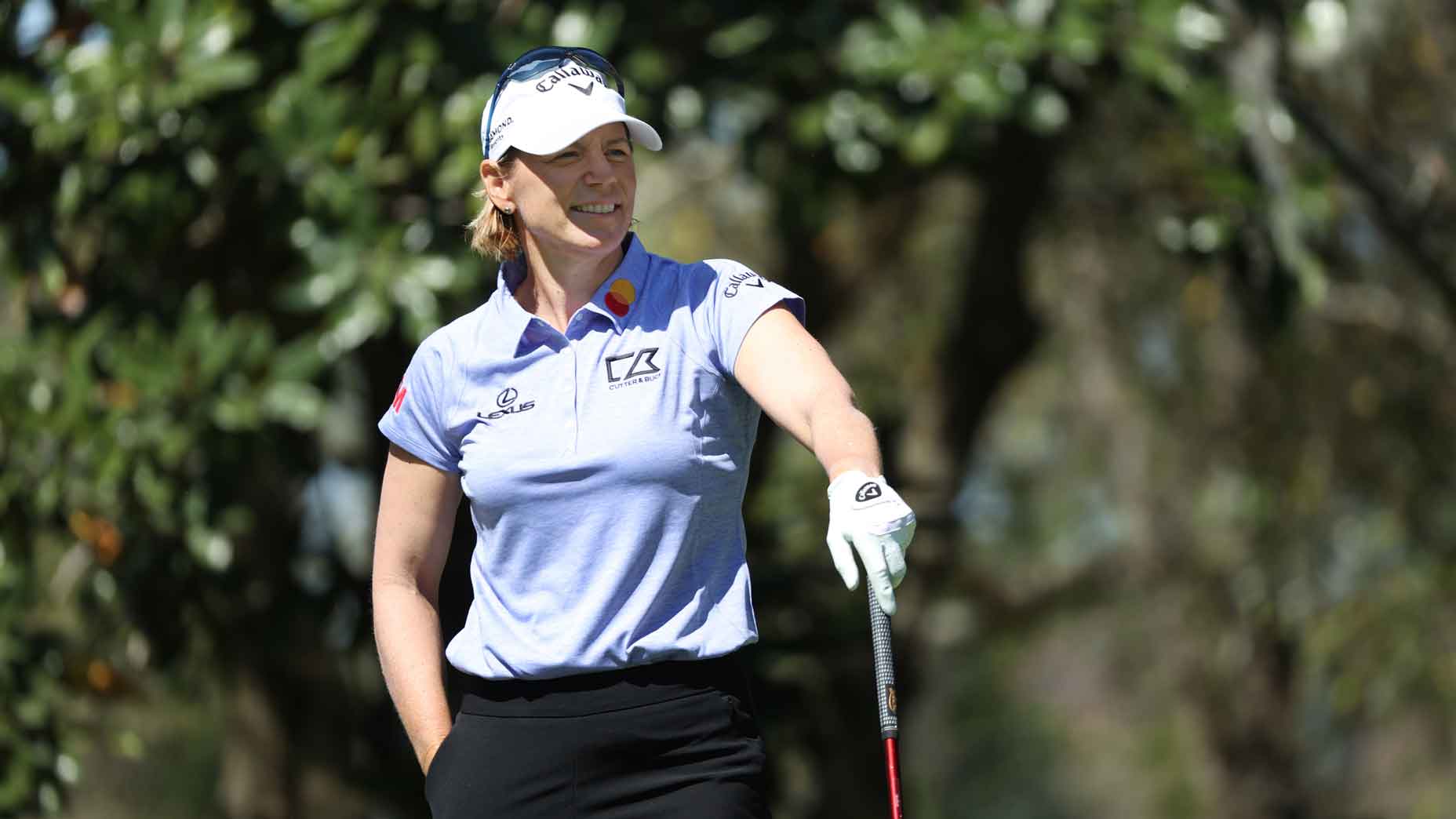 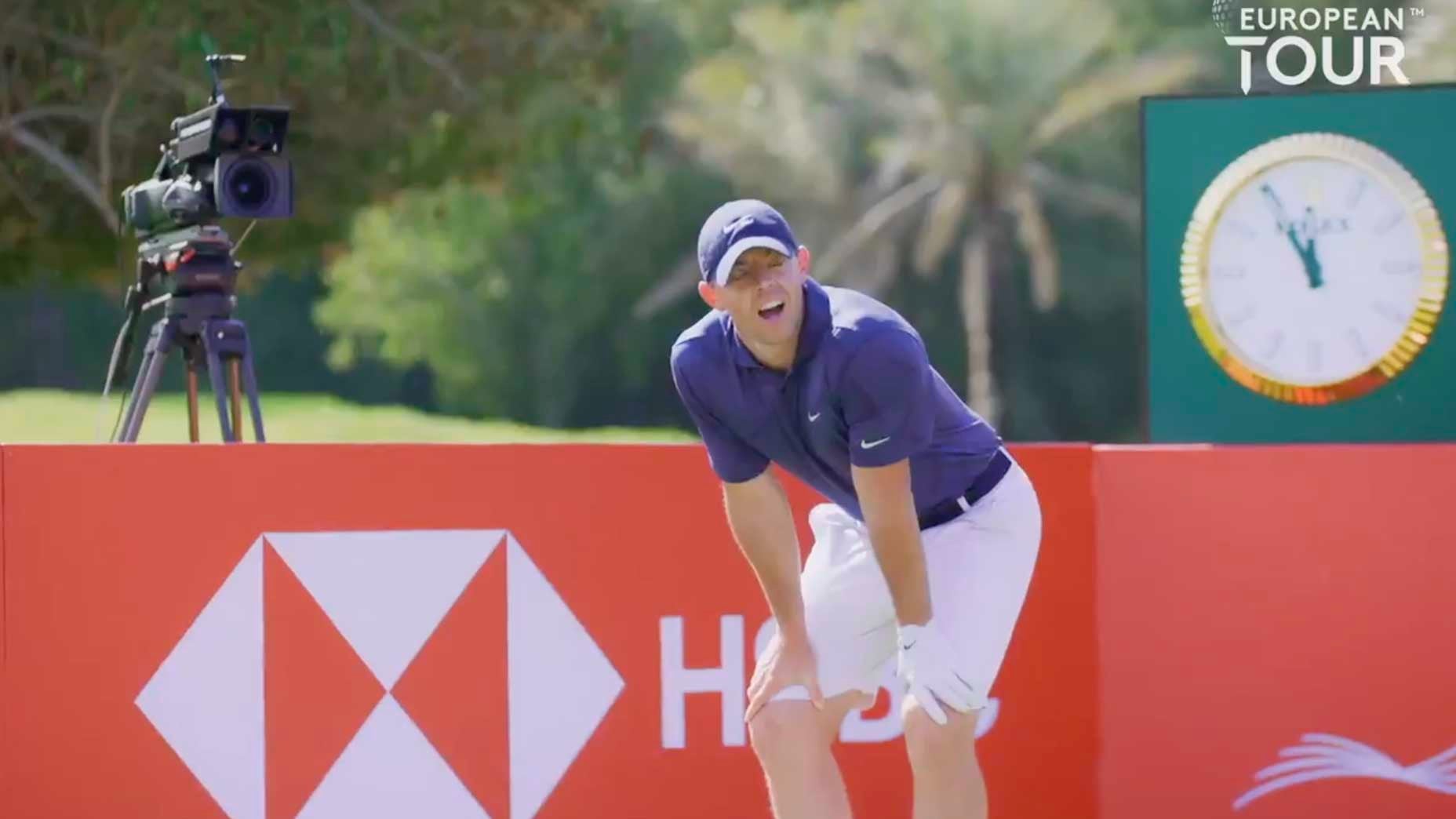