You gotta see this! Jack Nicklaus hit one of the shots of the year and the Dalys are on fire at feel-good Father-Son Challenge 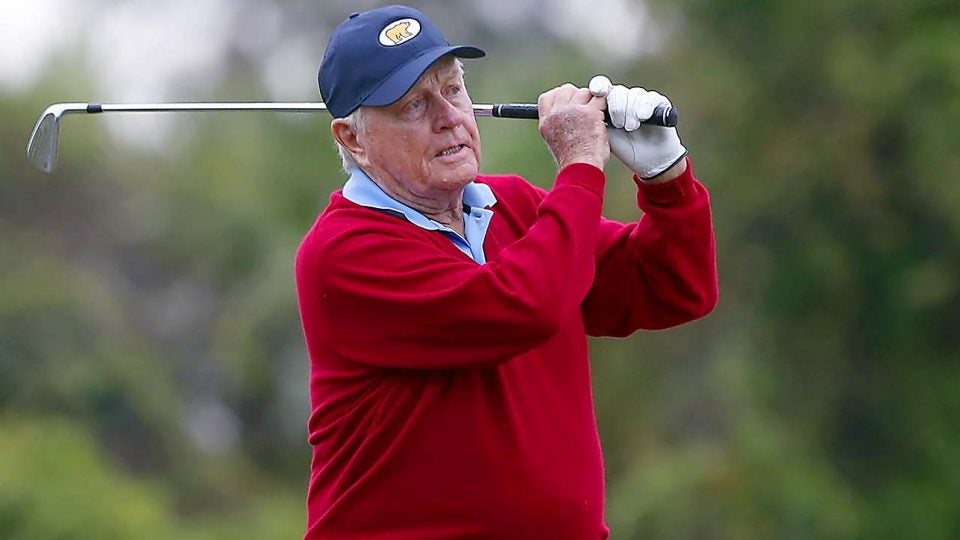 ORLANDO—How many shots did you see this year, in person or through the magic of TV? In the thousands, right? Unless you were at the PNC Father-Son Challenge, or watching the NBC coverage, you might have missed one of the most memorable of the year, played by one J.W. Nicklaus, 78-year-old patriarch of the ever-expanding clan that bears his name and stamp.

Big Jack is playing in this event with his schoolboy grandson, GT, who is more of a musician than a golfer, but a good stick nonetheless.

Saturday was the first day of this two-day event (following two days of pro-am fun). Coming up 18, Team Nicklaus was in it. It’s a scramble format so you pretty much have to birdie every other hole if you’re going to have a chance.

The senior Nicklaus, swinging the golf club like a man who spends more time at tennis than golf, foozled his long approach shot on 18. GT hit his over the green and left himself with about a 60-yard pitch shot.

There was a camera on him, plus his grandfather’s eyes and also those of his caddie/father, Gary Nicklaus, a former Tour player who is now an amateur golfer again. With a sand wedge off of wet turf, the kid hit a good shot to about 25 feet.

Now it was Nicklaus’s turn, and it mattered. They all matter to Nicklaus, but some matter more than others.

You place the ball, in this format. Nicklaus fussed and fussed. Here. No, here. No, not there, here. Finally, he found a patch of grass he liked.

He took a sand wedge from his bag, made a couple swing with it—then switched to a 6-iron!

This is the man who told Tom Watson that he played the right shot, from over the 72nd green at the 2009 British Open, when he chipped with a putter. He was being polite. When was the last time you saw a player chip with a 6-iron? This was the real deal.

He settled over his ball, choked down on the club, got the grip in front of his stomach, which apparently is enjoying Jack Nicklaus Ice Cream on at least a semi-regular basis. One flavor is chocolate peanut butter swirl and proceeds go to the Children’s Miracle Hospital Network, so it’s all good, right?

Nicklaus caught the ball flush, it ran up a hill and across the green, rolling like a putt, finishing maybe 15 feet beyond the hole. Touch of class, as Venturi used to greet such shots. Team Nicklaus would have two chances for its birdie 4 from there. It needed only one, GT rolling it right in.

Jack smiled from ear-to-ear. It was beautiful.

Bang! What a finish for Team Nicklaus. 💪💪 @JackNicklaus and grandson GT shoot 61. pic.twitter.com/PhONcvG7C0

They signed for 61. They trail the leaders, Big and Little John Daly, by two. The chance of any team making up two shots in this format is slim. The chance that Nicklaus will grind over every shot on Sunday is 100 percent.

It’s just a wonderful December golf event, in part because most of us have a history with each of the headliners in the field. You have to have won one of the four majors, or a Players, to get invited.

There was something moving about seeing Greg Norman (and son) playing with Nick Faldo (and son). What those two did on that Masters Sunday in 1996 showed the game in all its beautiful complexity and showed their humanity as well. Neither had any love for the other back then. In part it was an Aussie v. an Englishman thing. But the heart each showed when it was over that day was the game at its best. You can make the case there hasn’t been a richer moment in the game since.

At the British Open in 2008, Padraig Harrington, the eventual winner, played in the last group with 53-year-old Greg Norman. Faldo’s game had deserted him by that point and he was doing TV commentary. He watched Norman make an absolutely perfect, no-yip putting stroke and said, “It’s not fair.” No sentence could have been better.

After playing on Saturday, Faldo said that whenever golf fans ask him about his career, they typically get various details wrong—“except when they’re talking about the ’96 Masters. They know how many Greg was up by, and how many I won by. They always want to know what we said in the hug.”

Norman had a six-shot lead through three rounds. Faldo won by five. In their hug, Faldo said to Norman, “Come here, mate—I just want to give you a hug.” At least, that’s how he was remembering it on Saturday.

Faldo was in a chatty mood and it was great talking to him. A reporter asked Faldo if he could say how that moment made both of them seem more human to millions of golf fans. Up until then, Faldo struck many fans as robotic and mechanical. As for Norman, he was so perfect—in terms of physique and tailoring and swing—there was almost nothing to grab on to.

Faldo considered the question and thought about it for a moment and said, “I really couldn’t say.”

Of course. The athlete cannot control our emotional response.

Faldo has a seat at the table, Tuesday nights, in the clubhouse, second floor, Masters week. Norman doesn’t. It doesn’t seem fair but life’s not fair. Anyway, they’re both doing OK. They’re playing in this thing, with their healthy grown sons. It’s all good, right?