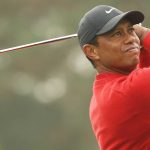 Tiger Woods during the final round of last November's Masters.

One of the best backyards in golf — Tiger Woods’ — appears to be getting even better.

The Jupiter Island Practice Facility, the official name for the incredible short-game spread at Woods’ home, looks to have work being done on three of its four greens and most of its grass, based on an overhead photo taken by Floridian Dakota Atkinson on Wednesday (and more widely shared by the TWLegion account). Woods, who designed the original layout, is home in Jupiter recovering from injuries sustained in a car crash at the end of February.

According to his design website, Woods designed the facility across 3.5 acres after he moved into the house in 2010, and it features the four greens, bunkers and room to hit shots as long as 150 yards. A message to Woods’ agent, Mark Steinberg, regarding a potential renovation was not immediately returned.

Two years ago, and just days before winning his fifth Masters, Woods told GolfTV that the facility was capable enough to ready him for the greens at Augusta National.

“A lot of practicing my putting, short game, getting the speed down and really trying to play arcing break and literally just trying to hit the highest point possible to fall in the front lip, because you have putts there … I’ve had 10-footers that break eight feet. So it’s just seeing lines that you don’t normally see,” Woods said.

On Feb. 23, Woods was involved in a single-car crash in Southern California, where he suffered multiple leg injuries. After various procedures, he returned home in the middle of March.

Since then, various players have said they’ve been in touch with Woods through calls, texts and visits. Rory McIlroy said at the Masters that he went over to Woods’ house for a couple of hours and said he was “in decent spirits. And actually not as, you know — like when you hear of these things and you look at the car and you see the crash, it’s like, you think he’s going to be in a hospital bed for six months. But he was actually doing better than that.”

Justin Thomas said Woods was “bummed” not to be playing in the Masters practice rounds. “But he’s been good,” Thomas said.