#AskAlan: In what ways has golf most improved over the last decade?

In this week’s installment of #AskAlan, Alan Shipnuck decides how the game has improved over the last 10 years, opines on Bryson the Designer, ranks potential storylines for the Masters and much more.

Alan, who has a better chance of winning a major in 2020 from these 3 and why: Tiger, Rickie or Xander? All have a decent chance but I think Xander, hope it’s Rickie. Thanks for answering all of our questions this year! Entertaining as always! #AskAlan – @forearmshivers

Well, thanks for partaking in this fun, strange weekly ritual of ours! I, too, enjoy the banter. To your question, Xander is clearly an ascendant talent with no discernible weakness. He has finished third or better in three of the last six majors! What Tiger has done over the last year+ is mind-boggling, but day three at the Presidents Cup was a reminder that his battered body can betray him at any moment. Still, Woods’ ball-striking remains preeminent and Masters Sunday was a monument to course management, guile, patience, precision, want and will. If Tiger is in the hunt at Augusta or supremely quirky Royal St. George’s, how could we possibly bet against him? So I’ll take the living legend by a whisker over the talented upstart.

Is it okay to say ‘Rolfing’ instead of ‘play Rolf’ during the Hawaii swing? – @RickyLegumes

This is exactly the kind of zaniness that makes me look forward to scrolling through every week’s questions. And that Rolfing himself jumped into the Twitter thread to offer an earnest response is just too good. (Personally, I prefer play Rolf.)

In what ways is golf better or worse than it was at the start of the decade? – @GolfingBrock

Better: Tiger is not mired in the most salacious scandal of the Internet age. The other top players are younger and cooler. The LPGA is thriving. For everyday golfers there are many more fantastic public courses to discover, from the cliffs of Nova Scotia to the sand hills of Nebraska to Oz’s King Island, from  Streamsong to Sand Valley to Sweeten’s Cove. The emphasis on fun is wonderful, whether it’s sporty par-3 courses or whimsical putting greens. The golf media — or, put another way, the creation of golf content — has been diversified with younger, hipper voices.

Worse: The ancient playing fields have been rendered largely obsolete by obscene distance gains. The game has frittered away a decade and failed to attract new participants, largely because in many circles golf remains stubbornly stuffy, uptight, homogenous and xenophobic. The golf media has contracted substantially. I still don’t have an ace. 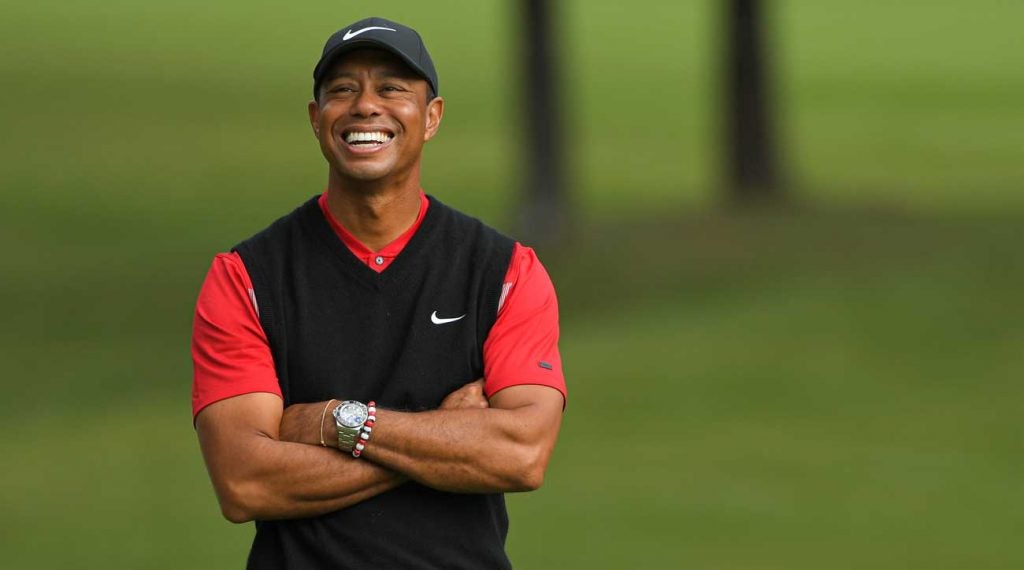 Tiger Woods began the 2010s decade much differently than he ended it.
Getty Images

Is Bryson going to be a terrific or terrible golf course architect/designer? – @GolfLover67

I’m actually intrigued to see if he could conjure something truly original. I love the neo-minimalism movement as much as the next guy but, other than Doak’s Loop, has anything truly ground-breaking been built recently? Maybe Bryson’s tortured brain could give us something crazily original. I would actually like to see him try.

Oh, hell yeah. Tokyo is going to be a home run, with all the top players there and none of the faux-controversies that were such an embarrassment to the sport the last time around. I’m praying Tiger makes the U.S. team. Can you imagine what a scene that will be if/when he leads the U.S. delegation at the Opening Ceremony?

1.  How much are you looking forward to the Ryder Cup in Wisconsin?
2.  Which day do you want to meet for a beer? – @FakePoulter

1. Deeply. Let us not forget that my controversial column about the Ryder Cup forecast long-term dominance for the U.S. Paris was an unfortunate beginning to this epoch but when the Yanks win at Whistling Straits that will give them two out of the last three Cups, just as the core of recent European teams (Poulter, Stenson, Rose, Garcia) all are hitting their early- to mid-40s. I’m going to miss the entertaining European victories (and the American angst that followed every loss) but I’m willing to trade that fun for sweet, sweet vindication.

2. Sunday night, because I will need to get plastered if the U.S. lays another egg.

Tournaments
You told me so! OK, so you were right, Europe. But just wait until 2020…

#AskAlan After your epic golf trip Down Under, what’s left on your golf bucket list? – @CountDownDave

These are the courses I desire most at this moment, more or less in this order: Fishers Island, Cabot Cliffs, Oakmont, Prairie Dunes, Morfontaine, Shoreacres, Maidstone, Ohoopee, Swinley Forest, Diamante Dunes. As luck would have it, just today I got a game organized at Fishers for June, when I’m on my way to Winged Foot for the U.S. Open. The big-game hunter never rests.

You get any access for a long form piece — what are you writing about? – @stick_club

Tiger is so obvious I’m going to disqualify that as answer, so I’m going with Patrick Reed. It would be deeply fascinating to embed with Team Reed and get a close look at their, uh, quirks. And maybe, just maybe, locate some humanity.

Why were you the only person on Golf Twitter that *didn’t* subject their swing to Max Homa. – @Laz_Versalles

I like to think of myself as a contrarian but maybe I’m just a killjoy.

What is the best story for you to write at this year’s Masters? – @LiveTweetGolf

This is an important point — writers don’t root for people, we root for stories. These would be the most impactful/interesting/buzz-worthy outcomes:

1. Tiger repeats and continues his ascent up Mt. Nicklaus.
2. Rory completes the Grand Slam and finally reasserts himself in the major championships.
3. Spieth breaks his slump and returns to the front ranks of the game.
4. Patrick Reed solidifies his standing as the ultimate antihero.
5. Koepka continues his march on history.

What course you played in the last 5 years was the biggest disappointment and why? – @PintosJavi

Has to be Cape Kidnappers. I’ve been salivating over those pictures for a decade, but I never felt the magic there. Don’t get me wrong, it’s a terrific course, and the 12th hole has one of the coolest infinity greens ever built, but I guess my expectations were way too high.

I feel like a broken record with this one. What will it take for a regular PGA tour stop in the Pacific Northwest? – @UWMoose

It’s damn shame we don’t get there beyond the very occasional major championships. There’s not room for another tournament during the West Coast Swing, and let’s face it, it can be pretty cold and dreary in the PNW that time of year. Best option would be during the Fall Series, when the weather is delightful and the schedule elastic; right before or after Napa would make sense. All it would take is Amazon or Microsoft to write a big check and surely the lords of Ponte Vedra Beach would be happy to create more playing opportunities for the Tour’s middle class.

Pump the breaks! With Woods having just turned 44, the idea that he will win three majors this year is, uh, fanciful. In his prime Tiger won roughly one of out three majors in which he competed. Let’s not get toooooo greedy here.

Does 2020 establish Brooks vs Rory as the defining rivalry of this generation or does Spieth return from the ashes to challenge for alpha status? – @wannabegolfer22

Why not both? I refuse to believe Spieth won’t find it — he’s too talented and tenacious to remain a non-factor. Four years ago I thought Spieth and McIlroy would be the game’s marquee rivalry. They were fire and ice, Jordan’s hot-blooded play contrasting nicely with Rory’s unshakable cool. And their games were so different. McIlroy and Koepka are similar in a lot of ways. Stylistically, their budding rivalry is less interesting because of the sameness, but I love both of their swagger. It will be so fun to watch if they keep tangling in the big events.

If you could be a golf writer at any point in history other than the one we live in, what era would you choose? – @SHistorians

Mid ’70’s/early ’80’s. Jack was enjoying his last act, Watson and Trevino kept pushing him to the brink, Johnny Miller had an epic run, Seve was just making the scene, and outsized characters like Ray Floyd and Lanny Wadkins and Hubert Green were still making the scene. Plus, print was still king. Second choice would be the roaring ‘20s, when the great Bobby Jones was becoming an icon and so many great courses were being built. And, like Grantland Rice, perhaps I could have helped found Augusta National.

#AskAlan Are Jason Day and Dustin Johnson trending towards one-and-done in major championships? Given the depth of talent, would one major be considered a failure for these guys? – @TheSecretDuffer

Day is an interesting case. For a decade he was a huge underachiever, for about a year he was the best player in the world, and then over the last three+ seasons he has been a maddening enigma. Twelve Tour wins, including a major, feels about right for Day at age 32. Dustin has been a consistent contender for far longer and had his heart broken many, many more times. If he doesn’t bag a few more majors Dustin will surely go down as one of the game’s all-time what-ifs.

Does anyone complete the career Grand Slam in 2020? – @maccentre43

Of course! The entire industry is built on FOMO. Something better will always come along, or so it seems. Knowing this, the only options are 1) never buy anything, 2) buy all new stuff every six months. You did the right thing.

#AskAlan True or False: The best golf movie never made is a Tiger Woods biopic directed by David Fincher where Tiger never picks up a club on screen. – @scottvonn

Oh, gawd. *fans self* This is pretty much the best idea I’ve ever heard, on any topic, by anyone. I think I’ll start working on the screenplay.