If you build it: Jack Nicklaus’ design legacy is rooted in its evolution

Jack Nicklaus is more than a golfer, he’s an idea. It’s one thing to be the greatest champion the game has ever known, but to also be the quintessence of class, dignity and sportsmanship? Well, Jack represents something bigger than himself. In honor of the Golden Bear turning 80 on Tuesday (Jan. 21), GOLF.com is spending Nicklaus’ birthday week — with a little help from his friends — honoring the man himself. You can find even more Jack at 80 coverage in GOLF’s February issue.

To any fan of a certain age (I was born in May of 1963), Jack Nicklaus was an inspiration, the player after which you patterned your game, including how to act in victory and defeat. His evolution as a course architect has been equally enjoyable to study. Too many designers develop a single style, then stick with it. Not Jack. As he once stated, “You have to have variety. You have to have imagination, and you have to be able to adjust with the times, and that’s what we’ve tried to do.” A simple scan of the photos of his courses proves this as anything but lip service.

Nicklaus edged into course design with the help of his friend, the legendary architect Pete Dye. After Dye had Nicklaus hit shots for him while building The Golf Club in Columbus, Ohio, Nicklaus brought Dye to assist him in crafting Harbour Town, the late-60s marvel on Hilton Head. Harbour Town departed from the era’s standard course design fare. It was short by Tour standards; its subtle turns and tiny greens were challenge enough. Jack was the ultimate tactician–it figures his designs would follow suit. Nicklaus noted at the time that while Dye preferred to place hazards parallel to fairways (think No. 15 at Harbour Town), he thought players should be forced to carry them. The 1974 opening of Jack’s home course, Muirfield Village, brought to life the full Nicklaus vision. 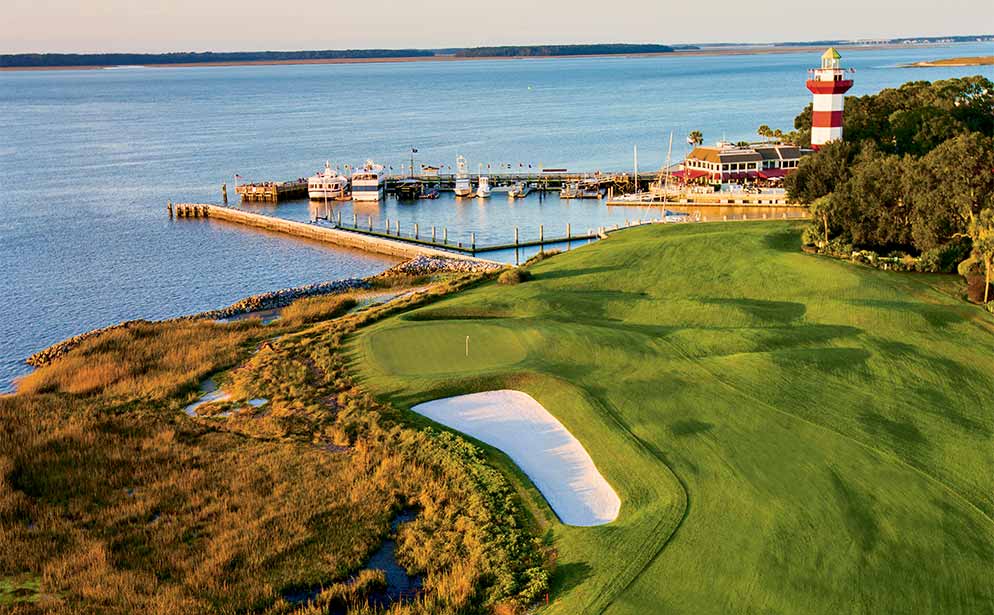 Harbour Town is one of Nicklaus' first (and most intelligent) designs, providing a slick, challenging track in only 7,000 yards.
Sea Pines Resort

The Reagan-era economic boom of the 1980s sent Nicklaus Design into the stratosphere. Designs tethered to real estate developments flourished. (Money always loves a winner.) Projects boomed globally. In Asia Pacific, I was particularly captivated by his work in China at Chung Shan Hot Spring Golf Club. I don’t say that lightly, having played it over 40 times. The routing remains some of the best sidehill architecture I’ve ever seen.

In the mid-1990s, Nicklaus Design was afforded perhaps its best opportunity since its inception: the Ocean Course at Cabo del Sol. It showcased what Nicklaus had learned in his first 25 years as an architect in terms of what everyday golfers could—and couldn’t—handle. The short, drivable 3rd hole is a case study in providing multiple attack angles, and its spectacular four-hole finish was one of the few built since World War II that could rival Harbour Town’s.

Jack’s evolution toward designs that afforded all skill levels a chance to enjoy themselves continued with the opening of The Bear’s Club in 2000 and the South Carolina low-country gem May River in 2004. At both, central bunkers and a plethora of short grass allow players to pick their own lines on how to play the holes. “The Bear’s Club is a strong golf course with 25 Tour players,” he said in a 2016 interview of Golf Club Atlas. “But the members love it. It has a bailout on every hole. That’s the evolution of my design.”

Nicklaus’ legacy as a player is set. The final chapters of his design legacy have yet to be written, but his team has built a mind-boggling 423 courses in 45 countries, and no less than 24 past and present Nicklaus designers have earned membership into the American Society of Golf Course Architects, including Jack II and Chris Cochran. Ultimately, you’ll be the judge.