‘I found myself pulling so hard for him’: Phil Mickelson, Tiger Woods explain the evolution of their friendship

Tuesday at Augusta National was full of excitement and intrigue, Masters week always is, but there was one aspect of the day that truly shocked the golf world: Tiger Woods and Phil Mickelson played a practice round together.

The average sports fan might not understand the unprecedented nature of this occurrence, but anyone who has followed the game for the past 20 years never would have predicted it happening (Mickelson on Tuesday: “I don’t know the last time we played a practice round before a tournament. I don’t think it was 20 years ago, but I can’t remember another time”). 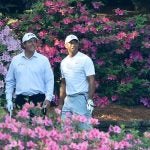 You may also like For Tiger and Phil, a trip ’round Amen Corner unlike any other in Tuesday’s practice round

Woods and Mickelson have always shared an icy-at-best relationship, especially when they were going head-to-head at majors and battling for No. 1 in the early- and mid-aughts.

But there they were, yukking it up together while strolling through the back nine at Augusta National. They even played a match against Fred Couples and Thomas Pieters (Couples noted that he and Pieters got “shillelaghed” by the two stars.

In their pre-tournament press conferences, both elder statesmen talked about how their relationship has evolved over the years to reach this point. Phil is almost always diplomatic, but his next line seemed to back up the genuine nature of his comments. “I texted him a while ago when he was playing at Valspar that it felt like it was a different time continuum because I found myself pulling so hard for him. It was unusual. And I find that I want him to play well, and I’m excited to see him play so well. And he is playing well.”

In his own press conference, Woods mentioned that Mickelson reached out to offer his support during Tiger’s most recent battles with his back, and that the team events did a lot to grow the bond between the two.

“When I got hurt and I had to take a different role on the teams, being assistant captain and really trying to help out on the side, how best I possibly could, Phil was great. He was trying to help me out when I was trying to make a comeback, my body wasn’t feeling very good: How can I help? “

But if there’s one variable that Woods attributes to finally making friends out of the two biggest stars of their generation, it’s time itself.

“Our friendship has gotten stronger over the years… and I think it’s just age as well. We’re at the tail end of our careers, we both know that. He’s 47, I believe, and I’m 42, and we have had a great 20 year battle, hopefully we’ll have a few more, but we understand where we are in the game now versus where we were in our early 20s, battling for who is going to be No. 1, and that was then and certainly this is now.”

Woods begins his first round at 10:42 a.m. Thursday morning alongside Marc Leishman and Tommy Fleetwood, while Mickelson plays with Matt Kuchar and Rickie Fowler at 1:27 p.m. You’ll have to keep your fingers crossed to see these two play together again this week, but with how both players are hitting it, anything can happen.