‘I don’t know if I’ve ever really seen this’: Pro slips, hits, nearly falls over 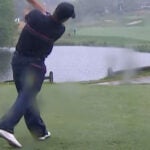 Denny McCarthy hits his tee shot on Friday on the 13th hole at TPC Potomac.

Denny McCarthy is a golfer. But he’s a hooper at heart. His first love, he admits, was basketball, but he was quite aware that, as he grew to 5 feet and 9 inches, he couldn’t ever post up LeBron or Giannis.

Still, the man hasn’t completely shut it down.

“I still shoot around a lot,” McCarthy said earlier this week. “I have a hoop in my backyard in Florida. Some days, when I’m not playing golf, I still like to stay active and go out and shoot around.”

Should you have any at all doubt that he does, let’s go over to the 13th tee at TPC Potomac.

There, during Friday’s second round of the Wells Fargo Championship, McCarthy took his driver back. There, at the top of his backswing, McCarthy planted his left foot (the right-hander’s lead foot). There, as his club came down, on a soggy day just outside of the nation’s capital, his left foot slipped forward.

And the club kept moving.

“If he hits this in the fairway, it’s my shot of the day,” analyst Trevor Immelman said on the Golf Channel broadcast.

He did. Incredibly. Athletically. On McCarthy’s downswing, his body tried to balance itself, and upon contact, he almost pirouetted. From there, McCarthy took a few steps to his left and watched as it cleared water to the left and dropped 232 yards out into the fairway.

“I don’t know if I’ve ever really seen this,” analyst Brandel Chamblee said afterward on Golf Channel’s Golf Central show. “You’ll see guys … By the way, the fact that this ended up in the fairway speaks to how athletic this guy was, and he was a heck of a basketball player.

“You’ll see the rear foot, or the trail foot, slip a lot, but not the lead foot. Watch that: As he goes to push it into the ground, no friction. It moves forward. You don’t often see a drive go that far, followed by a pirouette, but it was close enough.”

What say you, Denny?

“Yeah, I tend to slip every now and then,” said McCarthy, who parred the hole on his way to a one-under 70. “My feet like to get happy from time to time. Yeah, my left foot likes to do a little toe tap and it slipped there and I was able to — fortunately I’m pretty good, I’m experienced with slipping and still being able to make solid contact, and fortunately I did that there.”

“Unbelievable athleticism to hit that ball over that water and into the fairway,” Immelman said on the Golf Channel broadcast.