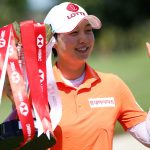 Hyo Joo Kim on Sunday after her one-shot victory at the HSBC Women’s World Championship.

Hyo Joo Kim waited. She had just blistered the Sentosa Golf Club in Singapore for eight birdies and no bogeys on Sunday, sprinted all the way to the top of the leaderboard at the HSBC Women’s World Championship and was now sitting in the players lounge as the rest of the field came in. She ate a Pop-Tart for lunch.

This wait was a piece of cake. Or toaster pastry. She had been already waiting over five years for another LPGA victory. What’s another hour or so?

Her eight-under 64 and 17-under total would be enough. She and her Pop-Tart would get doused in the customary winner’s champagne bath after her one-shot win.

“My goal this year was to get a win, and I’m glad I already achieved that,” said Kim, who stayed in her home country of South Korea last year and won twice on the Korean LPGA. “While I was playing on the KLPGA Tour last year, I honed my skills and wanted to adapt them to this year on the LPGA, and I’m very happy that these results came out.”

Five shots out of the lead to start the day (after an interesting third round that saw her make six birdies, six bogeys and six pars), she birdied the par-5 5th, the par-4 6th after hitting her approach to 6 feet, the par-5 8th and the par-4 9th on a 2-foot putt after getting a friendly bounce on the upslope left of the green on her approach. Making the turn at four under, she birdied the par-4 11th on a 12-foot putt from just off the green, then grabbed her first share of the lead after hitting her hybrid approach to 2 feet on the lengthy par-4 12th. Two holes later, she birdied the par-4 14th to grab the lead outright, and she’d birdie the par-3 15th before the wait began.

Behind her, Hannah Green would jump into the lead after a hole-out eagle on the par-4 14th and a birdie on the 16th, only to bogey the 17th and 18th. No one else could catch Kim. Green finished a stroke behind, Inbee Park, Xiyu Lin, Patty Tavatanakit were two back and So Yeon Ryu three behind. Lydia Ko was among four players to end up four back.

“As there were no differences in the score, I thought everybody had the opportunity to win,” Kim said. “I didn’t make any mistakes on the front nine, and as I went to the back nine, I felt I might be able to win it.”

She would. It’s her first win since the Pure Silk-Bahamas LPGA Classic in 2016, and fourth win overall. The world No. 9 continues a 2021 trend of notable players ending long victory droughts, following Ko on the LPGA Tour, and Jordan Spieth and Hideki Matsuyama on the PGA Tour.

“Winning after such a long time, it feels like my first win of all,” Kim said. “It feels like a dream at this moment.”