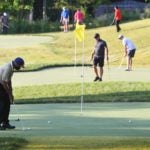 A bustling evening round at Harris Park.

A once dilapidated stretch of land in Kansas City, Mo., is now a lush haven of wholesome activity, thanks to nearly three decades of effort from local resident Chris Harris, who has devoted himself to rejuvenating his old neighborhood by creating an accessible opportunity to experience the game of golf. Harris’ four-hole pitch-and-putt golf course, Harris Park, opened in 2018, but will host a First Tee event for the first time on Aug. 11.

According to an article posted on KCUR.org, Kansas City’s NPR site, Harris’ efforts were driven by a desire to grow the game via exposure to the black community — especially the youths.

“Anytime somebody wants to be great at something they have to have the opportunity to experience it and learn how to get better,” Harris told KCUR. “It’s just so expensive to play golf and that’s the problem.”

What Harris has endeavored to do to solve that problem is nothing short of remarkable. It all started in 1994, when Harris began acquiring property, lot by lot, and raising money.

According to a 2019 profile on Harris’s project on the GCM website, by 1998, the Harris Park Midtown Sports and Activity Center had opened and included a park and basketball court. Later, he added a playground, miniature golf course and a volleyball court.

Harris continued to buy lots, with the dream of one day creating a golf course.

“I could go outside and play basketball and baseball and volleyball, but there was nowhere to play golf,” Harris told GCMonline. “I feel like, if I had a chance to play as a kid, I could have been good. I grew up and realized, I can literally build a golf course. Now I have a golf course.”

Harris cleared much of the land he bought himself and learned how to maintain grass and greens at nearby Mission Hills CC, where we worked on weekends in an effort to gain an understanding of the maintenance required. The club’s members stepped up with financial support, and the community rallied around the project. Harris recently left his job as a community advocate at Truman Medical Center to run the course full time.

The tees and greens on Harris’ course are synthetic turf, while the fairway is zoysiagrass and the rough is fescue. Multiple hole locations on each green provide an opportunity to play different variations of each hole. Harris estimates that the longest shot is around 65 yards.

While the coronavirus pandemic put some of the course’s plans on hold, the First Tee’s August date marks an exciting new chapter for Harris Park.

“Hopefully, if we can continue to have this thing grow,” he told KCUR, “[we can] have one of these (pitch-and-putt courses) in every state around the United States.”