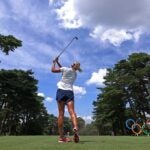 KAWAGOE, Japan — Few Olympic venues breathe and grow and perspire quite like a golf course does. It’s Kerry Haigh’s job to make sure that animal exists fairly, both for the men last Thursday, for the women this weekend and every day in between. For the PGA of America’s golf course whisperer, it’s a tricky job that requires a bifurcated brain.

Male players swing faster than female players. Women are more accurate than the men. More speed for both sexes is good, right up until the moment it is bad. It’s more Algebra II than Calculus, with some Health class mixed in, but it can easily be screwed up, especially when the events are just two days apart. On Saturday night, with 18 holes left in the men’s competition, Haigh was perusing the grounds looking for pinnable locations for all four rounds of the women’s event.

When you ask Haigh how he plans to make the same course play similarly from two different distances, he’ll meander his way to an answer, careful to not forget any part of the process, and to not offend anyone as well. It begins with the tee boxes, and luckily for him Kasumigaseki has no shortage of teeing grounds. Haigh will work with the course superintendent to pinpoint the “features” of each hole, whether that’s a set of trees, a fairway bunker or a water hazard, and make sure they are within the landing zones for both the men and the women. At KCC, that generally pushes the women up two teeing grounds from where the men played. It all adds up to 6,687 yards on the scorecard for the women, a meaty distance for a par-71 that parallels how the USGA sets up it’s U.S. Women’s Open.

The type of shots women play from those distances also differ from the men, too. So the rough is cut down about one inch to 2.5”, and Haigh takes into a account the trajectory of approach shots when determining hole locations. “Last week, we had three inches of rain and every ball stopped pretty much dead or spun back,” he said. “We don’t know if that will be the case this week.”

If there’s a major difference in the clubs being used, Haigh will offer a bit more of a cushion for players, pushing the hole further from the edge. He dials in the numbers from all these factors, and when that’s not enough he’ll also just observe practice rounds to see it in real-time. If it sounds like a guessing game, it’s not. He’s been doing this for decades for men’s and women’s competitions, and pulled it off five years ago at the 2016 Olympics.

KCC’s greens will roll at the same “Olympic Speed” as he calls it, for each event. (He prefers to not share a Stimpmeter number because, “I don’t think that’s good for a superintendent’s well-being.”) Every morning and every night he putts on each green, adding as much data to his algorithm as possible. If the forecast changes overnight, they’ll make adjustments in the morning. Nothing is set in stone, and Haigh’s track record is as clean as it gets. No pro has ever said, “They’ve lost the golf course,” on one of his setups.

Haigh is a straight-shooter who seems to respond best to detail. When asked specifically about Holes 6, 14 and 17 on Tuesday, he said those holes in particular he expects to provide the same exact excitement as during the men’s competition. Both 6 and 17 are drivable and 14 is a par-5 that can be reached in two shots. Haigh would also be the first to tell you that the winning score at his championships don’t matter to him. Three over or 23 under. He doesn’t want to “influence a part of the story,” as he said. But he was particularly proud of the fact that both Inbee Park and Justin Rose each shot 16 under to win gold during the Rio Olympics. “That was something that we were very happy about. You can’t control any of it to that degree. But I think it really shows that the course played reasonably similar for both weeks, and that’s really what we’re aiming for this week as well.”

You know what comes next, though. And Haigh does, too. Hindsight is everything in golf course setup. Will it actually play similar for the women? After a couple days of practice rounds, America’s Danielle Kang doesn’t think so. “I did watch the guys play, but I think it’s going to play really different from how the guys played for us.

“The golf course is playing really long, I don’t really see a lot of wedge shots spinning back like I watched on TV.”

Sophia Popov seconded her thoughts on length. So did Yuka Saso. Kang said she’d been hitting full hybrid/rescue shots into greens, and 5-woods or 4-irons into par-3s. That’s certainly different than what we saw last weekend.

“Drivers were hit where not necessarily we would be hitting drivers,” Jess Korda said. “[The men] were saying that it was just so soft that they could be super aggressive.”

Therein lies the last piece of Haigh’s course setup pie: Mother Nature. She controls all things and rather is uncontrollable herself. The course that was soft for the men has slowly been baked a bit more each day, under hot, windier conditions. The Zoysia fairways are back to where they were a week ago, audibly crispy underneath your steps.

So will a female competitor match Xander Schauffele’s 18 under? Maybe, maybe not. If Haigh does his job like he normally does, that figure shouldn’t matter to anyone.