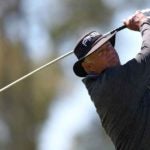 Kirk Triplett, a three-time winner on the PGA Tour, said his path to success included lots and lots of work.

SCOTTSDALE, Ariz. — There are no nameplates on the driving range at the Scottsdale Open, so the players toil in anonymity. At high noon on Wednesday, the range was packed, as late starters searched for a swing thought and early finishers pounded out their frustrations. The distinctive sound of high-level golf filled the hot, dry air: thwack, thwack, thwack. Up and down the line, the swings were an enviable combination of elegance and violence. Eyeing the different actions, it’s impossible to discern which player has won $20 million on the PGA Tour and which will never get a cup of coffee in the big leagues. Who is the Tour winner and who has been marooned on the mini-tours for 15 years? A Google search might provide those answers, but the larger mystery remains: What is the thin green line that separates those who prosper on Tour from the poor souls stuck in the purgatory of Scottsdale Opens?

“It’s different for every player, and it’s your responsibility as a player to figure out what is keeping you from being better,” says Kirk Triplett, a three-time PGA Tour and eight-time Senior Tour winner, who shot 70-69 at Talking Stick Golf Course to make the cut on the number. “These guys are all tremendous physical talents, but they’re not all good tournament golfers. That can be a profound difference. To understand it can take some real soul-searching. You have to ask yourself some questions you might not want to know the answers to.”

Triplett found his way to Tour success by making his improvement intensely personal. “At every level, I was never the best player,” he says. “I could always find somebody ahead of me where I could say, I can be as good as that guy if I practice this, this and this. That’s been my M.O. all the way along. Like a greyhound chasing the rabbit.”

No doubt there are physical elements that hold back certain players. If the driving range is choreographed precision, the practice putting green tells a different story, with all manner of grips, postures, blades and training aides hinting at the turmoil within. On closer inspection, even the rhythmic swings have a few flaws. Andre Metzger, with a self-taught swing and silver beard, is a Dakotas Tour legend, having won nine tournaments and topped the money list multiple times. But he’s never been able to break through to bigger things because under pressure he tended to come under the plane on the downswing.

“I would fight the chunks, and you can’t get through Q School worrying about something like that,” says Metzger, 38. He recently began working with a swing coach for the first time and is bullish about his game; after an opening 65 in Scottsdale, he said, ”I would honestly be surprised if I don’t win this thing.” (A second-round 68 has him six strokes off Carson Roberts’ lead.) But he knows that the challenge ahead is metaphysical. “I’ve been around a lot of PGA Tour players, and, to me, the big difference is they have a calm about them,” Metzger says. “As an outsider, it seems like they almost don’t care. Mini-tour guys get a lot more emotional. As far as talent or game, I’m not buying that any of the Tour players are better than me. But I’m trying to calm it down and keep my emotions under control the way they do.”

“I’ve been around a lot of PGA Tour players, and, to me, the big difference is they have a calm about them.”

The co-mingling of mini-tour grinders and Tour veterans at this Scottsdale Open has led to some teachable moments. For the first two rounds Nick Mason, 37, was paired with Tour stalwarts Joel Dahmen and Nate Lashley. Mason shot an opening round 68 but in his words got “pummeled” by his friends and playing partners, as Dahmen shot 65 and Lashley a 62 to take the lead. (Lashley followed with a 71, getting clipped by Mason by four strokes.) But Mason was proud of his scrappy first round, saying, “If I was 27 years old, I would have shot 74 today.” Despite some scratchy ballstriking, he kept his cool by channeling the vibes of his playing partners. “I learn every day from these guys, and most of it is attitude,” Mason said. “They’re both good dudes, they’re positive, and that leads to low scores.”

But what is it that has held Mason back while his buddies enjoy Tour semi-stardom? “I’ve thought about this a lot, and my answer is always the same: You have to be able to hit the same shot for a million bucks as you can for $10,000 and feel the same about it. I haven’t quite grasped that. I’ve been in the hunt at a PGA Tour event one time, I’ve played in a major, I haven’t been able to play the same as I did in the $20,000 mini-tour events. That’s the main difference. There are little physical things, like the way Nate chips it is unbelievable, but it’s a very minute difference. It’s mostly internal.”

Or, perhaps, you can just talk yourself into that self-belief, as Dahmen has. “The mental game is huge,” he says. “Course management is big. Once you start climbing the ladder, from college to mini-tour to Korn Ferry to the Tour, you have to feel like you belong. Your inner-belief has to rise a crazy amount at every level, almost to a false level. Because you’re going to get beat up at times. The biggest challenge is believing that you belong. At every level I had to tell myself over and over that I belonged. Eventually, I did.”

The moment of clarity usually comes far from the bright lights of the PGA Tour, at working-class events like the Scottsdale Open. Kevin Streelman, 41, was just another desert rat chasing the dream until a breakthrough during the first stage of the 2007 Q School, his sixth straight year trying to play his way onto the PGA Tour. “I birdied five of the last six holes to advance,” says Streelman, who has opened 65-68 in Scottsdale. “If one of those putts doesn’t go in, I don’t know if I ever would have made it to the Tour. You just have to keep giving yourself those competitive opportunities, get pressure on you, and see how you handle it. Some people do and some don’t, and that’s not necessarily something that has to do with a great golf swing or pretty putting stroke. I tell young players all the time, there’s going to be a round, or nine holes, or even just one shot where you need to step up and make it happen. And it could affect the rest of your life. It’s just how this game works.”

It is the seductive promise of this breakthrough that keeps so many of the Scottsdale Open competitors coming back for more.

“I know that eventually something has to change,” Mason says. “I mean, I’m nearing 40, and I’m still playing the mini-tours. But I’m still learning and still improving, and I won three times last year. I’m not rich, but you can make some money in these things. Last year, I probably made what a teacher does, but I had a lot more fun. I’m traveling around, playing golf, having a blast. Hopefully I’ll have some better luck and get to the Tour. But I’m a realist. I know I can’t do this forever. I’ll stop playing as soon as I feel like I can’t win.”

But how will he know what that fraught moment has arrived?

“I think you just know,” Mason said with a sigh, and then he cheerfully ended the interview. The driving range beckoned, with all those other perfect-looking swings.