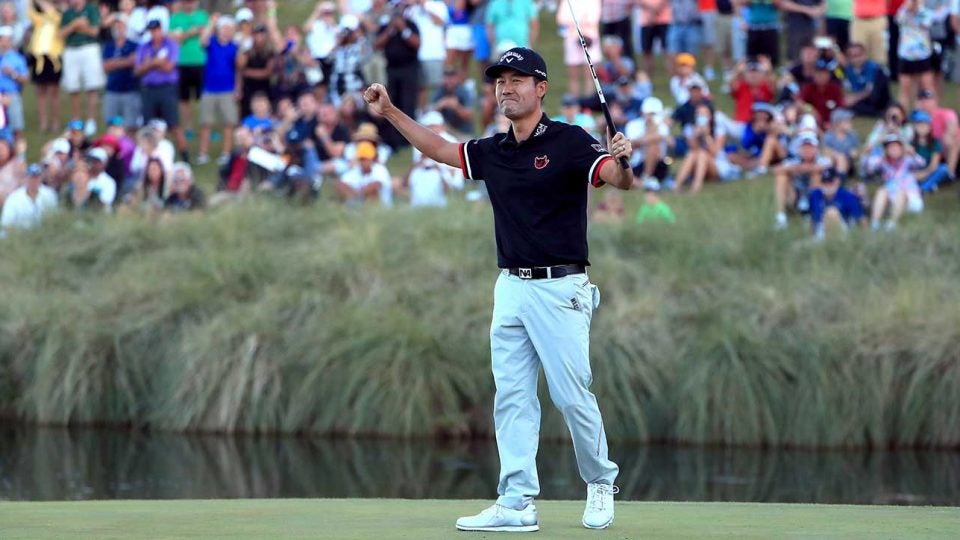 Kevin Na lifts his arms moments after winning the Shriners in Vegas.
@PGATour

Kevin Na was rolling on Sunday at TPC Summerlin. He had a two-shot lead to begin the day and made the turn in two under after finishing the front side birdie-birdie-bogey-birdie.

He stepped to the 10th tee 24 under overall and leading the Shriners Hospitals for Children Open by three and had just nine holes in front of him and his fourth career PGA Tour victory… but then he missed the fairway left on the par-4 10th hole and soon the entire tournament would be turned on its head.

Na’s approach landed short of the green, and his delicate pitch over the bunker rolled past the pin and slowed down as it reached the back of the green — but one too many rotations sent his ball plummeting down the slope and into the rough. Na’s next chip was even worse, and from 59 feet away he three-putted and made a triple-bogey 7.

Na dropped to 21 under and now a group of four — Bryson DeChambeau, Pat Perez, Adam Hadwin and Patrick Cantlay — were all just one back, but it turned into a Na vs. Cantlay duel down the stretch.

They had identical scores on Nos. 11-15, but Cantlay took a one-stroke lead on 16 when he birdied and Na found the water with his second shot and made bogey. But roles reversed on 17, as Cantlay found the water on the short par-3 and made bogey while Na made a clutch par save to tie him with one to play. They both made par on 18, and after both made birdie on the first playoff hole, Cantlay three-putted for bogey on the second and Na won with a par.

How did Na overcome the disaster of the 10th hole? Easy, he says.

“Experience,” an exhausted Na told Golf Channel, minutes after his victory. “I have been in that situation before and I have failed many times. I lost three playoffs; this was my first playoff win, and I kept telling myself this was the playoff I was going to win.”

Na won his first PGA Tour event in 2011, but he lost three playoffs — in 2005, 2014 and 2015 — before he finally broke a lengthy winless streak and won the 2018 Greenbrier. Two more victories followed in the Charles Schwab Challenge in May and, now, the Shriners.

“It came down way too close,” Na said. “I had a comfortable lead; I felt really comfortable and then had a really bad tee shot and got unlucky and made a triple, and all of a sudden I felt like I was the underdog. But I’m a fighter.”