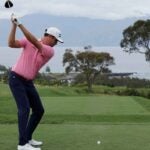 Harris English has a pre-shot routine that is designed to help ensure a perfect takeaway.

This week, English is enjoying a continuation of that momentum with a two-shot lead over a stellar field through two rounds at the Sentry Tournament of Champions. It’s clear the work he’s been putting in is paying off, and one way that English ensures his swing stays on track is by focusing on the beginning of his takeaway during his pre-shot routine. English was asked about the purpose of his left-hand move during his pre-shot routine after his round on Friday, and he gave a detailed answer.

“One of my, I guess, swing faults from even when I was a kid is my takeaway gets a little off and when I get off, it will get a little quick and the club head comes a little inside and gets low,” English said. “So I’m trying to keep that club head outside my hands and keep the club head halfway back a little bit higher than my hand. So that’s kind of a swing key, but I mean, sometimes I do, I guess, tournaments I’ve gone back and forth just kind of what I’m feeling that week. And my coach kind of let’s me do stuff like that, keeps me on top as much as possible, but it’s kind of the swing key for the week is that takeaway, getting the takeaway nailed down.”

English’s focus on his pre-shot routine is an important lesson for recreational players, too: Nailing your takeaway is the first and most significant key to hitting a quality golf shot.