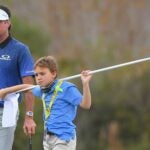 The dad concealed his son’s wedge and putter. He got his boy on the range at one of the most-hyped events of the last golf year. He plopped a few balls down and had the kid hit near the most-hyped golfer ever and his almost equally hyped young cub.

There are great dads. And there is Bubba Watson.

And, yes, as he shared before this week’s QBE Shootout, that was Watson’s now-9-year-old son, Caleb, hitting balls on the range at the Ritz-Carlton Golf Club with Tiger and Charlie Woods during last year’s PNC Championship. While Watson played with his father-in-law, Wayne Ball, in the playing pro-relative event, his young boy was there, too, close to the 15-time major champion and his now-12-year-old son.

“So it was interesting to hear that he signed up and he’s there,” Watson said of Woods. “I’ll be there, and I’ll be one of those people that follow him around, trying to see how he’s doing, making sure everything’s good.

As Watson was alluding to, and as you may have heard, the older Woods is playing in this year’s PNC, some 10 months after suffering multiple leg injuries in a single-car crash. A couple weeks after tweeting out a three-second video of him hitting on the range, and days after hitting throughout the Hero World Challenge, his event in the Bahamas, Woods said Wednesday he and Charlie would again be playing in the scramble event next Saturday and Sunday.

There, too, again will be team Watson. But as late as late last week, Bubba Watson said Woods was undecided.

“Yeah, so after I saw his swings last week in the Bahamas, I texted him,” Watson said. “I said, hey, are you going to play next week? He said, man, I don’t know if I can get around, but I’m trying; I’m working.”

Also playing at the PNC is the father-son team of Matt and Cameron Kuchar, the latter also playing in this week’s QBE and the former caddying. When asked about Woods, Kuchar said it was “cool” and “amazing” (twice), and that he was “excited” and “happy.” So he’s a fan.

“Now we see Tiger Woods committing to it, and you realize he’s not doing it because it’s a normal tournament; he’s doing it because it’s the Father-Son; he gets to play with Charlie; he gets to hang with friends,” Kuchar said. “It really is a unique, special week and so cool for the event. I think everybody’s just so excited to see Tiger back. It’s an amazing recovery, amazing comeback and certainly happy that he’s in good enough shape to be able to play golf.”