The second round of the AT&T Byron Nelson is in the books, and it was a birdie barrage in Dallas, with the five players at the top of the leaderboard already in double digits under par.

Here’s everything you missed from Friday’s action at Trinity Forest. 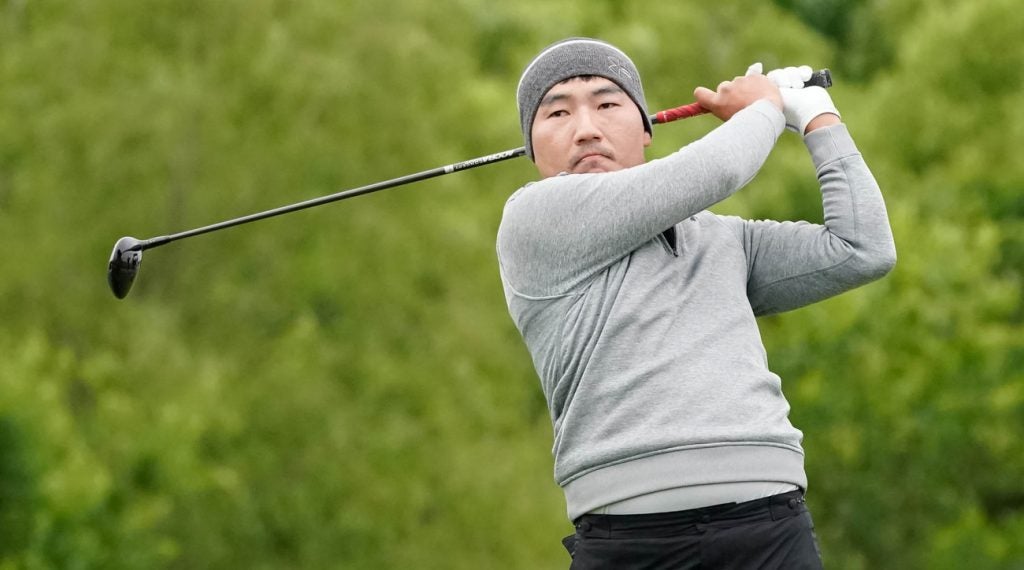 Sung Kang tied the Trinity Forest course record with a round of 61 on Friday.
USA Today Sports
Sung Kang lit it up

Kang went on a birdie rampage, carding ten birdies and not a single bogey en route to a scintillating 61. That’s ten under par, folks! The round not only tied the course record, it also tied with five others for the second-lowest round on Tour this season. (Phil Mickelson currently holds the title with his 12-under-par day at the Desert Classic earlier this year.) Coupled with his first-round 65, Kang is 16 under par overall and leads his closest competitor by four shots with two rounds to play.

The birdie that tied the course record 61 …

The 31-year-old has two top tens this season but has yet to claim a Tour victory. If he can keep this crazy momentum going, it just might be this week.

Drivers
Yo, Gear Guy! Will a longer driver shaft give me longer drives?
Brooks Koepka is still lurking

Koepka followed up a solid first-round 65 with a second round of 66 to get to 11 under par through 36 holes. He made seven birdies and two bogeys on Friday and trails Kang by five shots heading into the weekend.

FOUR birdies in a row for @BKoepka.

News
Brooks Koepka on Brandel Chamblee clown tweet: ‘A picture’s worth a thousand words’
What about the other big names?

Jordan Spieth seems to be finding his footing in Texas. The 25-year-old fan favorite hasn’t finished better than T21 this season (and that was at the Masters), but is in good shape thus far at Trinity Forest. Through two rounds, Spieth is seven under par overall (68-67), which is currently tied for 10th. He’s made plenty of birdies, with seven in each round, but he’s also suffered a double bogey on both Thursday and Friday. But hey, if you want some good Spieth news, he appears to be rolling the rock well again! See below.

Moving on ?@JordanSpieth sinks this 27-foot birdie putt to move to 7-under @ATTByronNelson. #QuickHits pic.twitter.com/2n026VEl0V

News
Tiger Woods is giving away a putting lesson—and a Bahamas vacation! Here’s how to enter
What about Tony Romo?

Romo improved upon Thursday’s 76 with a respectable 74 on Friday. His scorecard was still colorful, but a bit more balanced. The final tally: three birdies, three bogeys and a double. Not bad!

And he isn’t even in last place. Romo is currently T148 at eight over par overall, which puts him ahead of four pros. Small victories!